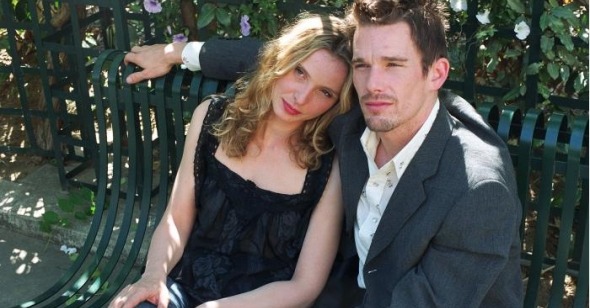 Though March of ’05 may seem a bit late to set about wrapping up the cinematic year that was ’04, by the industry’s calendar, we’re right on schedule. After all, January and February seem to have been designated as official victory-lap months for the prior year, full of award ceremonies, backslaps, hand wringing, and hand-jobs all culminating in the mother of all awards shows: the Oscars. (Don’t miss Neal Block’s coverage of the best and worst dressed!) Though it’s fun to overdose on end-of-the-year releases, make snap judgments about movies seen only days prior, and then cram as much hyperbole and idiosyncrasy into a list of ten as possible, there’s something to be said for sitting things out and searching for a little perspective. By asking our most faithful and prolific contributors to name their ten favorite films in order of preference, we got a pretty accurate consensus of what tickled our fancy this year—the number one slot receiving ten points, number two nine points, and so on. That Before Sunset ended up at the top by a wide margin might partly have something to do with our generational biases, yet arguably it has more to do with our sense of film history: its classical Hollywood and European filmic tendencies must have seriously affected us, though it certainly has its detractors. 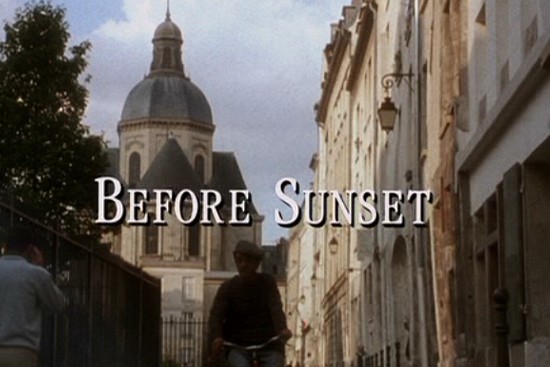 1. Before Sunset
How Before Sunset deeply affects so many people can’t be so easily defined. For each viewer who exits the theater swooning, claiming that Richard Linklater’s masterwork is the ultimate depiction of an idealized romance, there’s another that claims its impact is based upon its shattering of those very same ideals. Whether its gently radical real-time linearity firmly grounds it in our world or in some ethereal movie netherworld is the real trick of the film; Julie Delpy and Ethan Hawke’s insistent outpouring of conversation occurs in such a sustained current of generosity and ever-deepening complexity that “realism” ultimately seems beside the point. The honesty, compassion, and profound necessity of interconnection in Before Sunset is so fruitful that words such as “poignant” and “bittersweet” don’t really cut it, nor do strict generic reductions, such as Romantic Comedy or “Rohmer-lite.” Arguably, Linklater’s reliance on his deceptively meandering, increasingly urgent 80-minute structure helps the film ascend to a higher plane of human consciousness rather than entrench it in mere beat-the-clock suspense gimmickry. —MK
(Continue reading.) 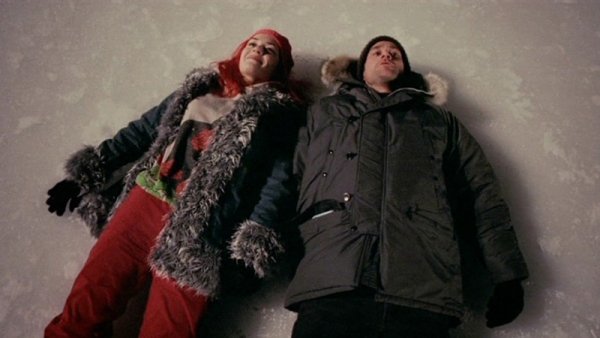 2. Eternal Sunshine of the Spotless Mind
It’s worth noting that I only know one person who didn’t like Eternal Sunshine of the Spotless Mind. Usually such uniformity of opinion—especially among ostensibly artistic twentysomethings—would be enough to make me extremely uncomfortable, but in this case I can only nod in assent with the crowd: there just weren’t many sweeter, smarter American movies this year. The scattershot Armond White, writing in the New York Press, got it righter than most when he compared the workings of Eternal Sunshine to the logic of a pop song. Here is a movie that declaims universality in the way only good pop can, boldly pronouncing words like “We” and “All” and “Everybody” with enough conviction and melody to make them sound like “Me” or “I,” like cosmic absolutes. Charlie Kaufman builds his script around a premise that seems too good to have gone unused for so long: what if we could, when the memory of someone becomes too painful, completely erase it? —NP
(Continue reading.)

3. Dogville
I’m sick and tired of hearing about “America.” Not the country, but the word, as it stands now as a meaningless adjective. Like the dollar, it isn’t worth much anymore. Notice how what gets depreciated is thrown around like so much cheap dirt—not only in tastemakers’ and politicians’ unoriginal, cynical appeals to “American values” and “American democracy” (in the face, of course, of “un-American” dissent), but also in the lazy titling of recent movies purporting to parody traditionalism or, to bring up another outmoded phrase, “the American Dream”: American Beauty, American Psycho, American Movie, Team America: World Police. The attempt to critique our society and its phony patriotism becomes compromised in the mere use of this obsolete word. Because to take this insidious word for granted in its usage—even in irony—is to reinforce assumptions of what “America stands for,” a facetious appeal to ideological collectivity. —MJR
(Continue reading.)

4. Kill Bill Vol. 2
There’s something downright Shakespearean about Kill Bill Vol. 2. You know, I’ve always liked that word “Shakespearean.” I so rarely have an opportunity to use it in a sentence… useful here because Tarantino films are the rarest of cinematic entities, juggling diverse genres, tones, and aesthetics with imperceptible ease, reviving the need to employ words like “sweep” and “scope” into the one’s cinematic post-mortem. Critics have seemingly cooled on Tarantino’s pop culture patchwork technique over the years, mistaking cleverness for ironic detachment and his singularly innovative mode of theory-to-practice film geekery for plagiaristic slapdash kitsch just as Tarantino is reaching personal heights as an auteur, and it begs the question: did Shakespeare have to deal with cooler-than-thou backlash from his detractors? Probably. —SS
(Continue reading.) 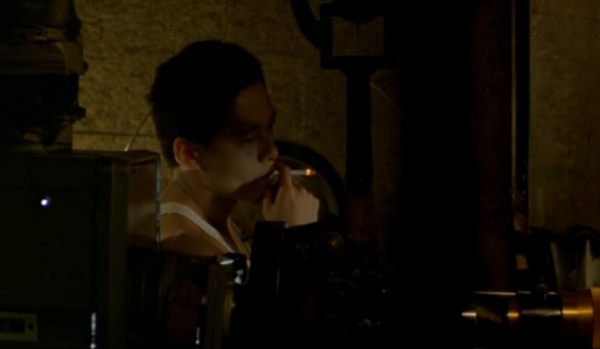 5. Goodbye Dragon Inn
Set in the halls and caverns of a haunted movie palace, Goodbye Dragon Inn doesn’t afford its audience a glimmer of natural light throughout its slender 81 minutes. But it is not altogether sunless—every once in a while, the windswept vistas of the King Hu classic Dragon Innplaying on the screen radiate into the theater’s empty spaces, staving off the night and captivating its ghosts. That recurring image of a sun-splashed movie infiltrating the dark evokes nothing less than our need—both personal and collective—to absorb in the reflected glory of the moving picture. A tattered tribute to the movies, Tsai Ming-liang’s latest summons the same ardor that it celebrates.—EV
(Continue reading.) 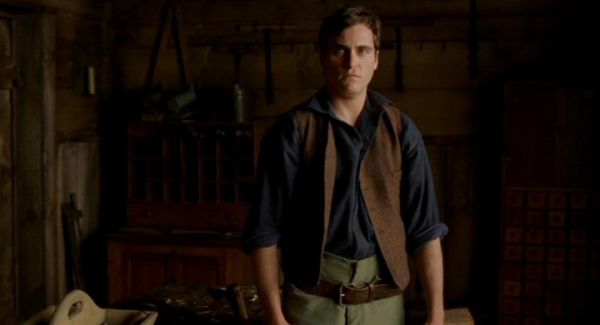 6. The Village
Where else in 2004 could we look for a film that tried to deal directly with post-9/11 America in a fictional context? And in the end, was The Village really obvious enough to turn its “#1 Thriller in America” tag into a spark for political activism? If Shyamalan wants to present us with a society bound by a fear of the unknown fostered in its populace by leaders paralyzed with denial and hint that this vision is not too far from what we’re living through in the United States these days, then, like the film or not, the work at least deserves to be taken seriously beyond knee-jerk reactions. Stepping outside of the theater, is there anything silly about the course our country is currently on?—JR
(Continue reading.) 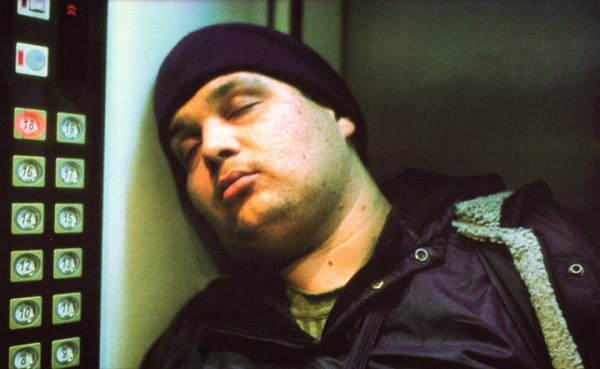 7. Crimson Gold
Iranian director Jafar Panahi’s newest feature is called Crimson Gold, but it could just as easily share the name of his previous movie, The Circle. Both banned in their home country, they harbor the same vision of a circumscribed society. In The Circle, a daisy-chain of humiliations emblematizes the subjection of Iranian women, eventually ending in prison, where Panahi, milking his metaphor to the last drop, closes his doleful chronicle with a 360-degree pan of a squalid cell. Crimson Gold’s circle is less literal, but it suggests a fate no less ineluctable. —EV
(Continue reading.) 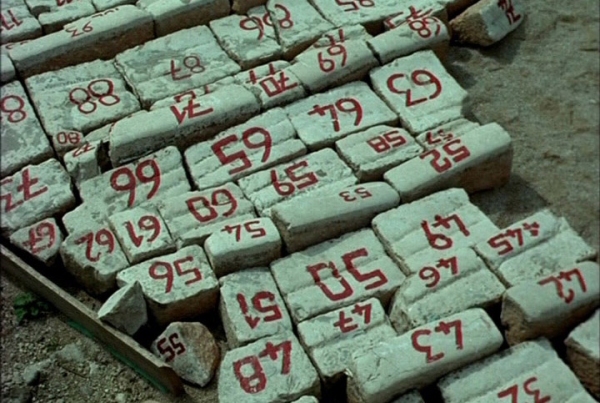 8. Notre musique
In 2001, just when it seemed too late, Godard gave us In Praise of Love, a shocking return to (comprehensible) form which put him back on the festival circuit and on the forefront of everyone’s mind. In Praise teemed with off-putting Godardian hyperbole but found an audience nonetheless, providing an ideal stepping stone back to the top spot he once commanded and may have begun to regain with this year’s remarkable Notre musique. The triptych, which begins in the dregs of Hell and climbs an artisan’s ladder to Heaven, seemed not only a divine cinematic hymn sung from above but most importantly, an inspired missal for all of us youthful filmmakers and film lovers who still believe the medium of cinema possesses both profound gravity and the power to change the world.—MP
(Continue reading.)

9. Time of the Wolf
Its dystopian near-future aside, Time of the Wolf is no more fable or allegory than any Haneke film. The repeated invocations of the Just—the 36 people whom God sent upon the earth to keep it aright, the loss of even one tilting it into chaos—announce themselves as red herrings by their very blatancy. This doesn’t mean that they’re irrelevant. Rather, they serve the film by revealing their own irrelevance, the meaninglessness of moral absolutes in a world that has defeated them, that has made the absolute obsolete. Haneke’s apocalypse chills because it ends nothing—it tells us nothing about what we will be but volumes about what we are. —AT
(Continue reading.)

10. Twentynine Palms
Twentynine Palms is undoubtedly “shock cinema,” a primarily derogatory term, although in this case I can think of no greater compliment; Dumont’s sociopolitical allegory is designed to shock the viewer out of complacency, out of normative modes of thought on film, narrative, and especially, our own deepest internal recesses. Where most films that center on the relationship between men and women are ennobling, Dumont’s work is withering, cruel, and challenging. It left me horrified both by the sheer force of artistic exaggeration and the profound depths of human capability. —MK
(Continue reading.)