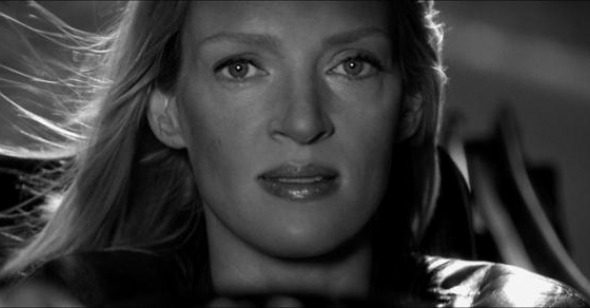 There‚Äôs something downright Shakespearean about Kill Bill Vol. 2. You know, I‚Äôve always liked that word ‚ÄúShakespearean.‚Äù I so rarely have an opportunity to use it in a sentence‚Ä¶ useful here because Tarantino films are the rarest of cinematic entities, juggling diverse genres, tones, and aesthetics with imperceptible ease, reviving the need to employ words like ‚Äúsweep‚Äù and ‚Äúscope‚Äù into the one‚Äôs cinematic post-mortem. Critics have seemingly cooled on Tarantino‚Äôs pop culture patchwork technique over the years, mistaking cleverness for ironic detachment and his singularly innovative mode of theory-to-practice film geekery for plagiaristic slapdash kitsch just as Tarantino is reaching personal heights as an auteur, and it begs the question: did Shakespeare have to deal with cooler-than-thou backlash from his detractors? Probably.

For all the cinematic dreck currently peddling disorienting editing as ‚Äúaction,‚Äù no one in good conscience could deride Tarantino for his indulgence in split screens or extreme close ups or smash zooms or any other mode of cinematic gimmickry, when it affords us hauntingly sparse centerpieces such as The Bride‚Äôs live burial, an aural choir of oppressive dirt, panting whimpers, and futile struggling set to the visual accompaniment of pitch black confinement that stretches on well past any spectator‚Äôs comfort level. Or the comparatively chaotic girl-on-girl trailer rumble, from which one can only garner appreciation for Tarantino‚Äôs attention to detail, as the white trash production design is deconstructed (and demolished) into an array of impromptu redneck weaponry, television antenna and spittoons included. Wes Anderson might garner acclaim for shoving bits of quirk into every spare corner of mise-en-sc√®ne, but Tarantino knows how to utilize them for maximum effect.

Say what you will about Tarantino‚Äôs loving appropriation of B-movie tropes, grindhouse thematics, and kung-fu culture, but don‚Äôt be so quick to overlook the second installment‚Äôs characterization, a cagey evolutionary leap from the frenetic, hack-and-slash avatar development of Vol. 1. Vol. 2 is an anomaly, a cathartic sequel comprised almost entirely of backstory, in which the characters (and they can only be called characters: no middling everyman or woman composites reside in this filmic universe of bittersweet revenge) can engage in the most contradictory of human acts. Perhaps the ur-example of Tarantino‚Äôs ability to balance his characters as though on the blade of one of his mythologized Hanzo swords is the titular corpse himself, embodied with such vicious restraint by David Carradine.

Looming over the first film as little more than a shadow and purr of shiver-inducing intimacy free of association (Has any character in recent memory had a more memorable introduction than Bill‚Äôs matter-of-fact ‚Äúthis is me at my most masochistic,‚Äù before unloading his gun into his pregnant ex-lover‚Äôs head?), Vol. 2 presents Bill as terrifyingly human. His collective patriarchal idiosyncrasies standing in stark contrast to the rest of his familial brood of henchmen (each worthy of their own comic book series, deliciously surreal if occasionally one-note in their depiction), Bill deftly evades definition: is he a murderer? Unabashedly so. But he‚Äôs the sort of cold-blooded killer who carefully cuts the crusts off of his daughter‚Äôs sandwich, his particular brand of laid-back malice all the more off-putting for its adherence to fatherly tradition and a warped sense of propriety. Carradine (giving every bit the comeback performance as Travolta did in Pulp Fiction, all subtlety without a reliance on showy posturing) portrays Bill as a father, a brother, a lover, and a mentor first and foremost. He is the true nucleus around which even Uma Thurman‚Äôs Beatrix Kiddo revolves, a villain that is blissfully banal and endlessly elusive all at once.

If the vengeful violence of Kill Bill Vol. 1 seemed somehow inconsequential, good giggly fun, Vol. 2 provides sobering context. Case in point: The Bride‚Äôs grueling training under kung fu master Pai Mei, a standalone chapter that initially seems out of context with the weathered Western aesthetic Tarantino evokes but quickly comes to illuminate just how desensitized we‚Äôve become as spectators in our downloaded ‚ÄúI know kung-fu‚Äù era. Not only does this grueling montage cheekily lend resonance to the easy violence of Vol. 1, it seems to respond directly to Tarantino‚Äôs detractors, who continually lambaste him for his reliance on ‚Äúempty‚Äù postmodern pastiche without ever acknowledging his sincere deployment of it. In a year where the aesthetic and thematic tropes of the training montage had been reduced to fodder for Team America: World Police, Tarantino brutally and pointedly puts Beatrix through her paces, refusing to discard such sentimental notions as ‚Äúhonor‚Äù and ‚Äúrespect‚Äù even as he basks in retrograde modes of storytelling.

Too often, films aim (and routinely fail) to excel in one capacity and one capacity alone- as an adequate genre film, or a diversionary star vehicle, or a thought-provoking character study, etc. And, given the relatively slim picking on the modern film landscape, even marginal success on any one level is enough to keep the average moviegoer sated. Tarantino, by contrast, chooses complexity over easy delineation, often to polarizing effect. This brave tendency can be perfectly encapsulated in two diametrically opposed moments from Kill Bill Vol. 2. The first comes in the gory climax of The Bride‚Äôs down ‚Äòn‚Äô dirty brawl with Elle Driver, as the camera lingers giddily on Elle‚Äôs plucked eyeball as The Bride‚Äôs bare foot squishes it flat and its sightless owner flails hysterically in the background. The second is Bill‚Äôs quiet death, five simple, poignant steps concluding with a crumpled corpse on a pristine manicured lawn. The former evokes squirms and sadistic chuckles simultaneously, the latter an aura of dignity and gravitas that few other films attain in the presentation of life‚Äôs quietest mystery, deflating Bill‚Äôs intangible nature into a lifeless mass of unanswered questions.

Not unlike Tarantino‚Äôs dichotomous protagonist, The Bride/Beatrix Kiddo, Kill Bill Vol. 2 seems to inhabit a series of dualistic planes concurrently and comfortably without ever boiling itself down to easy binaries. Good/Evil? Ruin/Redemption? Love/Hatred? Tarantino‚Äôs universe of assassins, their destructive tendencies (towards humanity writ large, their own included) and their efforts to claw their way out of a vicious cycle might seem outlandish, but it is in no way hermetically sealed. By contrast, its incongruities only make it more striking, and resonant well beyond its conclusive (and, arguably, misleading) nod to nature‚Äôs savage law, which optimistically posits that ‚ÄúThe lioness has rejoined her cub, and all is right in the jungle.‚Äù It is this solitary moment of euphoric release in Tarantino‚Äôs constructed jungle of human viciousness that is ultimately the most heartbreaking, encapsulating life‚Äôs little triumphs in a sea of overwhelming trials on a truly epic scale.