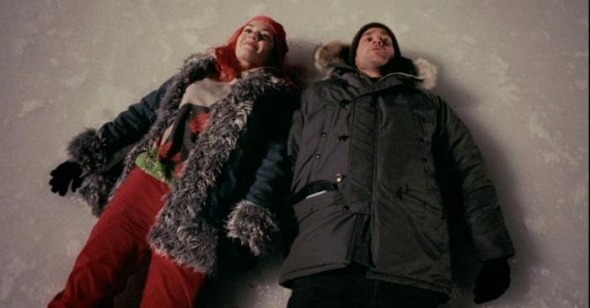 It‚Äôs worth noting that I only know one person who didn‚Äôt like Eternal Sunshine of the Spotless Mind. Usually such uniformity of opinion‚Äîespecially among ostensibly artistic twentysomethings‚Äîwould be enough to make me extremely uncomfortable, but in this case I can only nod in assent with the crowd: there just weren‚Äôt many sweeter, smarter American movies this year. The scattershot Armond White, writing in the New York Press, got it righter than most when he compared the workings of Eternal Sunshine to the logic of a pop song. Here is a movie that declaims universality in the way only good pop can, boldly pronouncing words like ‚ÄúWe‚Äù and ‚ÄúAll‚Äù and ‚ÄúEverybody‚Äù with enough conviction and melody to make them sound like ‚ÄúMe‚Äù or ‚ÄúI,‚Äù like cosmic absolutes. Charlie Kaufman builds his script around a premise that seems too good to have gone unused for so long: what if we could, when the memory of someone becomes too painful, completely erase it? It can happen in the cluttered offices of Lacuna, Inc. What would the ramifications of such a process be? What would one stand to lose? It‚Äôs one of those out-there conceptual set-ups that justifies science fiction‚Äôs existence as a genre, and make no mistake, Eternal Sunshine‚Äîwith its jerry-rigged garage sale technology‚Äîis nothing if not a gem of low-fi sci-fi.

It‚Äôll be interesting to see, with the passage of time, how Eternal Sunshine‚Äôs reputation fares, and if all the people who once misted up on hearing ‚ÄúMeet me at Montauk‚Äù will wind up defensively rejecting the movie like last summer‚Äôs radio anthem, embarrassed to ever have been caught on that hook. After a second viewing I still quite like the movie, and all the more because it‚Äôs the product of a totally unexpected creative alchemy: Michel Gondry, a music video director (I don‚Äôt care how legit of a jump this may have become or how great Gondry‚Äôs video work might be, for me this cross-over will always prompt post-traumatic flashbacks of Spun, Charlie‚Äôs Angels, The Cell‚Ä¶), Kaufman, the snide author of underfunny hipster arabesques, and Jim Carrey, a great screwball comic whose insistent forays into Academy-respectable multiplex drama have consistently obscured every quality that made him a star. I bought my ticket with extra reserves of vitriol in stow.

Kaufman had struck me as a too self-impressed writer done a grave misservice from the very beginning of his film work by cult pampering. His career started with awesome, profoundly fucked-up work on the writing staff of FOX‚Äôs short-lived but much remembered Get a Life‚Äîa flatly nihilistic little show which dynamited the domesticated comic universe of the sitcom, and which became template for a decade of absurdist American comedy to come. In his big screen cross-over Kaufman kept intact a gift for what Get a Life star Chris Elliott called ‚Äúmoments that are uncomfortable but funny at the same time,‚Äù but until now Kaufman‚Äôs screenplays have seemed like the work of a sketch writer out of his element, a sprinter trying his hand at a marathon; they hinged on scanty, one-joke premises that blew their comedic loads as prematurely as their titles and descended into hollow paroxysms of quirkiness halfway through their runtimes. Hints of genuine feeling were preemptively snuffed by a snarky distrust of sentiment; it‚Äôs a conflict in Kaufman‚Äôs writing that was pretty obvious in‚Äîin fact was the centerpiece of‚Äîhis screenplay for Adaptation. That film was a tedious prank, a punk-assed joke that challenged the viewer to feel, then razzed anyone silly enough get involved. Eternal Sunshine has guts enough to make penance.

Kaufman‚Äôs great non-sequitur lines are still present here: David Cross, a petulant stoner on the film‚Äôs periphery, makes his little screen time count, delivering a perfect, pissed-off reading of ‚ÄúI am making a birdhouse.‚Äù And the movie still leans heavily on one of Kaufman‚Äôs blurb-friendly set-ups, though in this case I‚Äôm not sure you could call it a joke; he‚Äôs landed on a central idea of remarkable resonance, and finally one with enough variations to play through a whole movie. The thesis writ bold across Adaptation‚Äîthat of sentiment vs. resolved cynicism, in life and in art‚Äîhas been worked into the story rather than over it in Eternal Sunshine. When the half-amnesiac Clementine (Kate Winslet) and Joel (Carrey) reconcile‚Äîor does it count as a new courtship?‚Äîagainst the backdrop of recordings where they express previous domestic dissatisfaction, it‚Äôs a really elegant expression of the way ‚ÄúI should know better‚Äù doubt runs cross-current to attraction in those irresistible, lovely doomed romances‚Äîthough is there any other kind? Kaufman still veers wide of hackneyed mush by focusing on a weirdo relationship that‚Äôs folding up on itself in doubt, but the writer‚Äôs obvious trepidation and fatalism never discounts true love or backs off of big feelings with a superior smirk. So if Eternal Sunshine sometimes errs on the side of the maudlin (it does), isn‚Äôt that more forgivable than a movie that counterbalances itself into nil?

As seductive as the film‚Äôs catchy premise may be, one always has the feeling that its characters are as important as its ideas. Scenes with Lacuna, Inc. employees played by Mark Ruffalo, a hobgoblin-creepy Elijah Wood, and Kirsten Dunst are sporadically funny, but they often feel like they‚Äôre marking time‚Äîit‚Äôs a measure of the strength of the movie‚Äôs central romance that we always want to come back to it. Winslet handles a tough character assignment beautifully; her Clementine would be probably be wince-inducing in real-life, but she‚Äôs too recognizable not to fall for a little bit through the safe conduit of the screen. Watching her you feel protective and irritated and potentially embarrassed to introduce her to your friends‚Äîand there‚Äôs a flash of a magnificent ass! Carrey‚Äôs work is just as good; despite more than a few flat-out awful films, he‚Äôs inarguably the great American screen comic of the last decade-plus‚ÄîI think most people who grew up with In Living Color, when being perfectly honest, would have a hard time naming anyone who‚Äôs provided them with more straight-up laughs in bulk. A big part of that success is the actor‚Äôs working-overtime screen presence; like prime Martin Short or Jerry Lewis, he gives every tic and gesture a little extra flourish, hyper-stylizing characters into busy abstraction. This made his ambitions toward serious drama seem pretty ill-advised; any number of actors could‚Äôve carried The Truman Show, but who else in Hollywood could play Ace Ventura? That said, Eternal Sunshine is the first of Carrey‚Äôs non-slapstick roles where he‚Äôs not straining for emotional effect just as hard as he strained for laughs as Fire Marshall Bill. Gondry‚Äôs loose-feeling dialogues, shot with a restless, re-positioning camera, seem to have caught the actor off-guard; without a lens to play up to he‚Äôs working smaller, turning inward. Joel Barrish as we first meet him is crabbed, passive, convincingly complex, and quiet. But there‚Äôs no doubt as to why Carrey was brought onto the film; the movie takes advantage of the actor‚Äôs distinct physical qualities while expanding him into heretofore-unexplored territory. In memories of playful intimacy with Clementine we see the Joel‚Äôs clenched frame loosen into something lank and clownish; for all the personas and props he has to play with while running fugitive through Joel‚Äôs headspace, it‚Äôs probably the most impressive transformation that Carrey makes in the film.

Eternal Sunshine‚Äôs centerpiece is the imagistic marvel of Joel going on the lam through the memory of his relationship with Clementine, increasingly panicked as he realizes the scope of what Lacuna, Inc. are disposing of; it‚Äôs a really epic chase sequence. Here the film risks running head-on into to that most creaky of romantic comedy conventions, the post-breakup highlight reel montage of ‚Äúgood times.‚Äù But instead of losing himself in lovelorn mooning, Joel recruits his memory of Clementine in his attempts to preserve and hide one of their privileged moments, lying low amidst the back archives of his life‚Äôs little traumas. Their retreat through his psyche provides an intimacy impossible in their shared life, where ‚Äúyou can spend so much time with someone only to find out she‚Äôs a stranger,‚Äù and Gondry‚Äôs unparalleled visual imagination creates indelible combinations with Jon Brion‚Äôs downbeat score: the spines of books in a Barnes and Noble fluttering blank, Clem and Joel‚Äôs shared life passing in diorama-style scenes viewed through a back-seat car window‚Ä¶

Most affecting, though, is the scene where a nervous young Joel is egged on by his peers to smash a disabled bird with a hammer, then is led away and comforted by a kid Clementine. It‚Äôs wrenching stuff‚Äîthe child actors speak with Carrey and Winslet‚Äôs adult voices, conflating childhood and adult trauma just as Dennis Potter did in Blue Remembered Hills. And baby Joel‚Äôs odd declaration, ‚ÄúI wish I‚Äôd known you as a kid,‚Äù recalls the sentiment of the strangest love song I know, Mott the Hoople‚Äôs ‚ÄúI Wish I Was Your Mother,‚Äù whose narrator is jealous of his beloved for all the moments she had before him, and who wishes he ‚ÄúWould have seen you/ Would have been you as a child.‚Äù There‚Äôs plenty of determinism ingrained in Eternal Sunshine, with its final shot an image of skipped groove repetition, but it expresses deeply felt regrets: there‚Äôs palpable yearning for impossible closeness, for an end for the troubling, unbreachable gaps which exist between us and the people we love, and the impossible dream of sharing everything. All of this exhibits a sensitivity that‚Äôs far removed from Adaptation, a film whose trailer made ham from the melodrama of Freddie Mercury‚Äôs crescendoing vocals in ‚ÄúUnder Pressure,‚Äù sneering at that song‚Äôs ability to move us. In fact the heart of Eternal Sunshine of the Spotless Mind, though it borrows its title from Alexander Pope, actually seems quite close to that of Mercury‚Äôs frantic appeal: ‚ÄúWhy can‚Äôt we give love one more chance?‚Äù