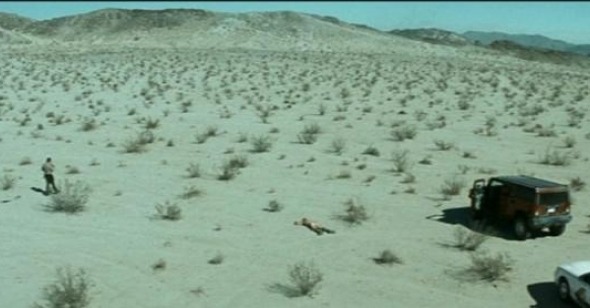 After viewing Bruno Dumont‚Äôs Twentynine Palms at a small New England film festival, I enthusiastically recommended it to a handful of friends. The film had literally knocked the wind out me, left me at once grasping for and repelled by human contact, provoked, sickened, angry, exhilarated. As much as 2004‚Äôs other great film, Before Sunset, had created a hermetic dream world of interpersonal connection that seemed to plant seeds of furtive hope in my soul, Dumont‚Äôs expansive structuralist nightmare, also focused claustrophobically on a single man and woman trying repeatedly to connect, to cement their relationship in meaningful exchanges (yet here failing), left me feeling less in control of my own emotions than at the behest of an all-consuming cosmic condemnation. Both are ostensibly love stories, according to their filmmakers, yet both prove that the power of cinema lies in both its ability to either empower the viewer or steal their self-control, to either appeal to some sense of self or shatter illusions. Twentynine Palms is undoubtedly ‚Äúshock cinema,‚Äù a primarily derogatory term, although in this case I can think of no greater compliment; Dumont‚Äôs sociopolitical allegory is designed to shock the viewer out of complacency, out of normative modes of thought on film, narrative, and especially, our own deepest internal recesses. Where most films that center on the relationship between men and women are ennobling, Dumont‚Äôs work is withering, cruel, and challenging. It left me horrified both by the sheer force of artistic exaggeration and the profound depths of human capability.

Naturally, these were all emotions I wanted to share with my friends. I had even gone so far as to tell more than a few that it was ‚Äúright up their alley.‚Äù My momentary lapse of judgment here eventually created slight friendship wounds, as it turned out that I had perpetrated a mild form of abuse by unleashing Twentynine Palms upon them. My need to pass these challenges along was perhaps my own attempt at the very communication Dumont posits as an impossibility. Many of my friends disliked the film intensely‚Äîeven if they had admired it on some nebulous level, they were antagonized and revolted, irritated and unappreciative. This is when I realized how truly great this film is.

The drastically polarizing nature of Dumont‚Äôs work comes not from any gleeful subversion, or insistence on rubbing our faces in putrescence (arguably Gaspar No√©‚Äôs at times admittedly intoxicating work falls more squarely here), but rather from its philosophical origins. In Twentynine Palms, like in L‚ÄôHumanit√© before it, Dumont doesn‚Äôt create traditional characters or even let his actors fully inhabit them; he situates them within specific social parameters and then watches as they recede before the camera. Katerina Golubeva (as moody, cadaverous European Katia) and David Wissak (as aging American hipster photographer David) may be vivid onscreen, yet it‚Äôs their very opaqueness that seems to appeal to Dumont. The opening sequence, one of the first of many static shots of the tense couple driving in their ridiculous battering ram of a Hummer, provides all the backstory and narrative drive that the film will offer: they are taking a trip to Twentynine Palms to ‚Äúcheck out the location.‚Äù Then we are left to watch helplessly, uncomfortably, as the two (communicating only in a simple, reduced French or an accusatory English) travel on and on, in and out of a dingy motel, back and forth between sessions of loud, cantankerous sex and irrational arguments and physical fights.

Just as they misunderstand each other in language and in body, they haven‚Äôt yet mastered the delicacy of their own flesh; their actions are lurching, unpredictable, lopsided. The only time Katia and David seem at peace with their own corporeality is when they leave their Hummer on a dirt road and, after exploring a field of gnarled Joshua trees and attempting to fuck against a large jutting granite surface, they splay their bodies out on top of large smooth rock, baking their skin under the burning sun, Katia‚Äôs hand cupped over David‚Äôs groin to protect it from the rays. Here, Dumont allows his characters to have a quiet interlude, albeit shortlived, and certainly the closest thing they will ever have to a moment of lucidity. To simply proclaim them as ‚Äúone with nature‚Äù or ‚Äúreduced to animals‚Äù is missing the point. David and Katia‚Äôs trip, an enormous project of stripping down of social constraints and expectations, doesn‚Äôt merely journey back to primitive state: it burrows further and further until it reaches an essence. Only here are the two completely divorced from all they encounter on a daily basis. ‚ÄúI don‚Äôt want to go back,‚Äù whimpers Katia.

Yet they must return, and this is Dumont‚Äôs ultimate foreboding. Twentynine Palms is undoubtedly a horror film, one that locates the violent urge within all men by utilizing Hollywood genre conventions in their most basic, condensed technical form. From the opening sequence, there‚Äôs an uneasy sense of hovering and watching and waiting, a queasy ominousness that lasts throughout. Even on the inside of the vehicle, the dashboard stares back at the audience with two gaping circular black holes. Yet the point of view of this ever-watchful camera shifts continuously from scene to scene‚Äîfrom a great God‚Äôs-eye omniscience, to a Deliverance-style indigenousness, and then back and forth between Katia and David. The latter is depicted most dramatically in the bravura motel pool sequences, with its camera (taking the point of view of a luridly predatory David) gradually sneaking up behind Katia as she dead-man floats before us, the dull sound of large trucks passing on the adjacent highway the only musical accompaniment. Ultimately, the plurality of eyesight is generously unsettling and sets up a tense array of plausible outlets for some sort of final reckoning.

It‚Äôs easy to write off Dumont‚Äôs dark view as cynical, even delusional and childish, and it‚Äôs even easier to laugh off the film‚Äôs emotional catharses in order to create a safe distance. Yet I‚Äôll put myself at the mercy of the irony-drenched cinema intelligentsia and admit that, despite David‚Äôs series of absurdly strident and garish orgasmic screams, I took this film as seriously as a heart attack, found its tedium engaging rather than soporific, and its distortion of human conduct as properly warped rather than forced. Contemporary American foreign policy, irrational in its violence, unkempt in its thinly veiled subterfuge, forces us to question just what we are capable of. By scaling it down to the individual, by locating the violent urge within two people, and quite specifically within socially conditioned male codes and irrevocably subsumed machismo, the film becomes unbearable in its implications, and nearly unrecognizable in its literal character manifestations. Its final 15 minutes, in ruins with apocalyptic mayhem and horrific jolts, is the final tectonic shifting below the film‚Äôs quietly rumbling surface. Behavioral narrative cinema is once and for all replaced here by something far more difficult to face, and the need for viewers to take it literally is perhaps what wrecks it‚Äîand furthermore creates a culture of denial. The separate rape and murder that culminate Twentynine Palms, each abrupt and almost incidental, are each a manifestation of denial, repression rearing its very ugly head. Thus, the shielding instinct it unleashes in its audience is a doubling of that very repression. This is the essential aspect of this ‚Äúcinema of shocks‚Äù: an investigation of violence at its roots, its base mortal essence. Dumont‚Äôs dissection of human capability makes the political personal: the violence so escalates that what once seemed motivated contorts into something unrecognizable. Through Dumont‚Äôs brand of shock and exhilaration comes the ability to see more clearly.

Of all the surfaces and interiors that Twentynine Palms serves up as oppressive and intransitory (chlorene motel swimming pools, jagged rock cliffs, dull beige motel rooms, the earth-devouring Hummer, oscillating windmills, human breasts, buttocks, and genitals), there is one that it never dares to show us: the inside of the bathroom. Much as Hitchcock refused to enter this dastardly place in his celebrated Psycho teaser, Dumont uses the motel bathroom as the final threshold, a Pandora‚Äôs box we cannot return from once it‚Äôs been opened. Midway through the film, after a bout of passionate fellatio performed on David by Katia and a subsequent fade-to-black, Katia holes up in the bathroom and (irrationally) refuses to come out. Then after David repeatedly bangs on the door and (irrationally) screams and insults her, she rapidly exits. Dumont shows us a split-second of her point of view of David (handheld, remarkably opposed to most of the film) before she barges from the room to skulk in the desolate nighttime parking lot. This sequence is mirrored at the terrifying close of the film, except this time, David is behind that closed bathroom door. And what emerges is no longer David. All of the ‚Äúdysfunctional conversations‚Äù and desperate stabs at meaningful interconnection are dashed in one fell swoop, usurped by the id. What‚Äôs behind the bathroom door is as irrational as a Norman Bates, yet perhaps more frightening in its implications: it‚Äôs from inside and not out. Twentynine Palms exposes a horror we swallow every day, one that is quite controllable indeed; yet Dumont unearths it onscreen, and he presents to us the mangled face of all we refuse to allow to burst into our daily lives.