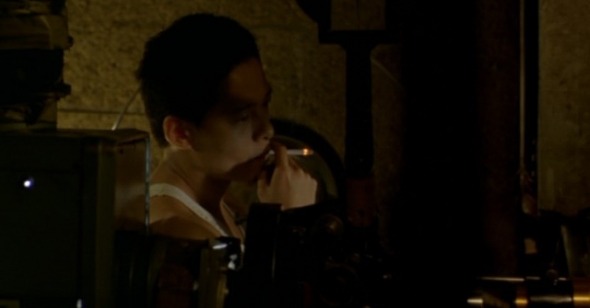 Goodbye. Dragon Inn plays April 26, 2015, at Museum of the Moving Image as part of the retrospective Tsai Ming-liang, presented with support from Taipei Cultural Center of TECO in New York.

Set in the halls and caverns of a haunted movie palace, Goodbye, Dragon Inn doesn‚Äôt afford its audience a glimmer of natural light throughout its slender 81 minutes. But it is not altogether sunless‚ÄĒevery once in a while, the windswept vistas of the King Hu classic Dragon Inn playing on the screen radiate into the theater‚Äôs empty spaces, staving off the night and captivating its ghosts. That recurring image of a sun-splashed movie infiltrating the dark evokes nothing less than our need‚ÄĒboth personal and collective‚ÄĒto absorb in the reflected glory of the moving picture. A tattered tribute to the movies, Tsai Ming-liang‚Äôs latest summons the same ardor that it celebrates.

Proudly plotless and uneventful, Goodbye, Dragon Inn may well be the purest distillation of the Taiwanese director‚Äôs cinema of urban solitude, pushing Tsai‚Äôs minimalist art to near abstraction. Mood, atmosphere, and form reign supreme. The meager action comes in the form of the aimless peregrinations and poker-faced poses of its largely mute gallery of loners. So withholding is this near-silent movie that when the first line of dialogue comes‚ÄĒa dryly delivered, ‚ÄúDo you know this theater is haunted?‚ÄĚ at the 43-minute mark‚ÄĒit arrives with the impact of a Bruckheimerian detonation. The delay of gratification and the confounding of expectations are certainly hallmarks of Tsai‚Äôs cinema, but the rigor here‚ÄĒcontrasted as it is with the kinetic splendor of King Hu‚Äôs Dragon Inn‚ÄĒis laced with a touch of perversity. (Not for nothing does he give one of the main characters a limp‚ÄĒthe better we feel the distance of those hallways, the passing of those minutes.)

Tsai has never been shy about invoking his inspirations, and this movie is no different. If King Hu is the recipient of an explicit tribute, Jacques Tati may well be Goodbye, Dragon Inn‚Äôs patron saint. No other movie in recent cinema has expressed so vividly the musical quality of movement and composition. In what qualifies as a setpiece in a Tsai movie, a succession of men come and go in a restroom, one washing his hands, another coming back to retrieve a forgotten item, a wry dance held together by the bassline of a trio of men awkwardly standing side-by-side-by-side at urinals for an impossibly long piss. As much about loving movies as watching them, Goodbye, Dragon Inn foregrounds form. The medley of movie language‚ÄĒcamera placement, blocking, lighting, composition‚ÄĒbecomes the subject itself.

Like Tati, Tsai isn‚Äôt interested in form for its own sake. He realizes that art is simply another way of reconfiguring sight. Goodbye, Dragon Inn is perhaps his most radical restatement of that idea. For all the sadness and delicacy of his movies, there is something of a rebuke to them. They represent gentle scoldings of the modern sensibility; they remind us of our unparalleled capacity for complacency and myopia. When Tsai fixes his gaze on a ticket booth attendant crouching over a forlorn steamed bun, it recalls Edward Hopper‚Äôs young usher, leaning against a wall as a theater-full of people enjoy the show. Both are stunning portraits of isolation because they look where no one would think of looking. In Tsai‚Äôs case, his patient regard for his characters, keeping the camera fixed when others will have already moved on, if they even look at all, attests to his humanism.

That reverence for the overlooked extends beyond people and into places. Dead time litters his movies. In What Time Is It There?, a drab kitchen, freshly vacated by the protagonist‚Äôs father, is held in our sight for a prolonged moment, as if to soak in its every detail and essence. When the next cut shows the son clutching an urn of ashes, we realize that we have just been in the presence of a consecrated space. I haven‚Äôt seen What Time Is It There? in years, but that shot of the kitchen still lingers in the mind, an effect that Tsai pulls off with regularity. The impulse to memorialize the blessed inanimate is evident in Goodbye, Dragon Inn, with its protracted gazes into empty halls across listless minutes. Privileging us with a new way of seeing, Tsai literalizes the conceit and takes us into the bowels of theater, certainly as unimagined and neglected a concept as there is. He gives us glimpses of the decrepit corridors and dilapidated hovels that zigzag beneath and behind the movie palace. Lest we forget, he seems to be saying, these are the drab, forgotten spaces that comprise our shrines to our dream lives.