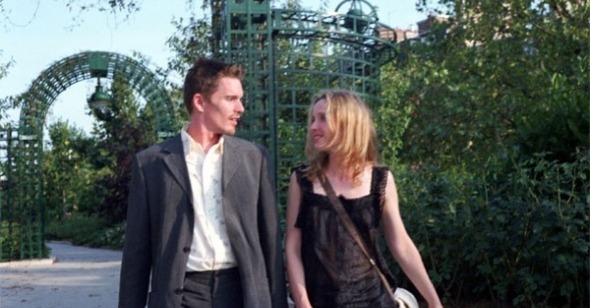 The Fundamental Things Apply‚Ä¶
Michael Koresky on Before Sunset

How Before Sunset deeply affects so many people can‚Äôt be so easily defined. For each viewer who exits the theater swooning, claiming that Richard Linklater‚Äôs masterwork is the ultimate depiction of an idealized romance, there‚Äôs another that claims its impact is based upon its shattering of those very same ideals. Whether its gently radical real-time linearity firmly grounds it in our world or in some ethereal movie netherworld is the real trick of the film; Julie Delpy and Ethan Hawke‚Äôs insistent outpouring of conversation occurs in such a sustained current of generosity and ever-deepening complexity that ‚Äúrealism‚ÄĚ ultimately seems beside the point. The honesty, compassion, and profound necessity of interconnection in Before Sunset is so fruitful that words such as ‚Äúpoignant‚ÄĚ and ‚Äúbittersweet‚ÄĚ don‚Äôt really cut it, nor do strict generic reductions, such as Romantic Comedy or ‚ÄúRohmer-lite.‚ÄĚ Arguably, Linklater‚Äôs reliance on his deceptively meandering, increasingly urgent 80-minute structure helps the film ascend to a higher plane of human consciousness rather than entrench it in mere beat-the-clock suspense gimmickry.

Before Sunset may feel like no other love story if only for its pruning down of all the tangles of relationship and movie romance to one terrifically ominous conversation, yet the emotions it dredges up, lovely and fearful, bond with the audience in an almost classical manner. The great conceit that unites Sunset with its gorgeously na√Įve predecessor, 1995‚Äôs Before Sunrise, is the imminent travel which will tear its lovers apart, quite possibly forever, within the span of the narrative: before the plane or train rips their idyll asunder, they must convince themselves whether or not one night of human connection can represent a lifetime of certainty and therefore face their own mortality. It‚Äôs been pointed out many times that the Sunrise/Sunset duo has become the narrative equivalent to the Michael Apted Up series, the most eloquent non-documentary evocation of aging onscreen. Jesse and Celine‚Äôs repartee in the caf√© about the visible lines of aging defines the essence of not just Linklater‚Äôs ongoing artistic mission to condense and expand time and human consciousness (Tape, Waking Life, Slacker) but the Bazin-articulated inherent ability of film to represent the moment of human conception. Cracks and wrinkles appear in the skin, and love deepens.

If we are to believe then that the acknowledgment of a finite love implicitly evokes the specter of mortality, then perhaps cinema‚Äôs only true expressions of romance are those that couple love and death. 2004 was an especially strong movie year for expanding the boundaries of how love can be represented, that its evocation onscreen doesn‚Äôt have much do with meeting cute, arriving at the all-important first kiss, and overcoming the doubts of whether opposites indeed attract. Michel Gondry‚Äôs Eternal Sunshine of the Spotless Mind forthrightly reconfigured love itself as a combination of psychotic spare parts, an endless stream of subconscious ones and zeroes just waiting to be deleted from the hard drive of human misery; yet Before Sunset‚Äôs supreme act of whittling, its reliance on long takes rather than millisecond blurts, makes an even more prophetic statement on the fragility of memory. How can we deem which experiences will ultimately define us? Jesse and Celine must quickly decide which memories will be worth saving. For all of Eternal Sunshine‚Äôs high-concept aspirations and artistic accomplishments, why does Linklater‚Äôs seemingly effortless gabfest reach heights of ardor the other could only make claims for in a written case study? Before Sunset taps into reservoirs of mostly unarticulated spiritual longing, it wrestles with notions of existence and legacy, it fights the urge to make solipsistic everyday experience, it localizes a world of romantic uncertainty within two naggingly dissatisfied thirtysomethings. It‚Äôs 80 leisurely minutes that feel like a whirlwind.

Perhaps its only true American counterpart is Casablanca, classically structured in inimitable Hollywood gloss yet primal in its ability to so thoroughly touch upon the mortality of romance, the disappointment of idealism, the anger of missed opportunity. The sheer heart-caught-in-the-throat wreckage of Before Sunset‚Äôs final 20 minutes‚ÄĒas we move from the cathartic emotional vomitting in the back of the taxi to Celine‚Äôs singularly enchanting and reassuringly cozy apartment‚ÄĒfeels fully earned as Jesse, casually rubbing his wedding ring, surprises himself by uttering ‚ÄúI know‚ÄĚ to Celine‚Äôs Nina Simone‚Äďaccompanied concern that ‚ÄúBaby, you‚Äôre gonna miss that plane‚Ä¶‚ÄĚ If he does indeed get on the airplane back to the United States from Paris, can the two of them put up with another nine years (a lifetime?) of uncertainty? Celine‚Äôs revelation that she lived in New York for a while, at the same time Jesse was living in the city as it turns out, is perhaps the film‚Äôs true shock to the system; everything after is an attempt to set the cosmos back in place. Likewise, Bogart‚Äôs Rick and Bergman‚Äôs Ilsa, both ravaged emotionally by the terrible nostalgia of their splendid pre-Occupation love affair, cannot help but witness the rejuvenation of their love as an impossible odyssey: the world is too changed, their lives have led them in seemingly opposed directions. Thus, the flashback sequences to their brightly lit, idealized escapades in Paris years earlier function in Casablanca much like Before Sunrise does for Before Sunset. Linklater‚Äôs earlier film now seems to merely be an elaborate backstory, a blissfully ignorant daydream that exists only in hazy, filtered flashback. In Sunrise, Jesse and Celine decide outright to not exchange phone numbers or last names, just let their apparently profound attraction speak for itself; likewise Rick and Ilsa‚Äôs sun-dappled idyll (complete with a drift down the Seine on a Parisian tour-boat, mirrored in Sunset‚Äôs solemn glide down-river) is defined by how little they know of one another and how they feel it practical to keep it this way. It‚Äôs this pragmatism, this sense of doing the right thing, either in the name of love or principle, that is ultimately both couples‚Äô undoing. And the site of their naivet√©, or their inability to fully realize their passions, of course ends at train stations, to Marseilles or to Brussels, improbability the overriding emotion as the engine chugs off into the great unknown.

Yet is a brief passionate romance, admittedly couched in nostalgia and years of outsized expectations, worth jeopardizing a long-term, more comfortable yet rewarding relationship? The greater question of infidelity hovers over both works. Ilsa‚Äôs marriage to the Czech Laszlo (Paul Henreid‚Äôs stand-up likability is only slightly sexier than that of a Ralph Bellamy due to his alleged underground resistance fighting) seems to fit like an old glove; meanwhile Jesse‚Äôs marriage has seemed to conveniently hit the skids, the passion has drained almost irretrievably, yet the relationship‚Äôs magnificent offshoot, his devotion to his son, Henry, takes center stage in his life. Sex is secondary but looming. Jesse‚Äôs dogged attempts at sexual interplay, which truly spring forth during some awkward moments on a bench in a blooming garden, seem like the ploys of a sexually deprived married man; Rick‚Äôs increasingly alcoholic bitterness seems also a byproduct of a similar frustration. Both romances were marked by a lack of climax, both have left their male counterparts sexually stunted.

That the question of which relationship is to be maintained and which is to be re-sparked depends so heavily on impending air travel doesn‚Äôt merely create tangible urgency, it makes grandiose the seemingly petty matters of just two people on Earth, the first couple caught in the crossfire of WWII, the other bridging a contemporary political gap. Importantly, both films also take place in their respective here-and-nows, their political allegiances and social awareness helping to prop up minor characters as something greater. Casablanca‚Äôs freedom fighters and Before Sunset‚Äôs evocation of ‚Äúfreedom fries‚ÄĚ are both symptomatic of their times rather than outright dogmatic; both manage to locate love itself as shockingly resilient, no matter how dubious the surrounding climate. Jesse stays, Ilsa leaves, yet both conclusions could end the years of doubt and longing, infinite dreams suddenly replaced by tangible goals. Time‚ÄĒof the years spent apart, of the hours left in their meeting‚ÄĒonly intensifies regret and expectation, ever widening the gap between illusion and reality; ultimately one has to take refuge in the illusion to risk facing reality permanently. Which do the final ten minutes of Before Sunset represent? Once we enter the nearly magical, casually sacred realm of Celine‚Äôs impenetrable castle walls, we fall back into a sort of otherworldly complacency. The only way for Rick and Ilsa‚Äôs love affair to continue on even after they‚Äôve been parted is for them to revel in the illusory nature of their meeting (‚ÄúWe‚Äôll always have Paris.‚ÄĚ). Likewise, Jesse and Celine will always have Paris, yet the stability of their future depends on the willingness to stay in their dreamworld or the choice to face the realities outside and what lies waiting for them if and when they choose to board that plane.