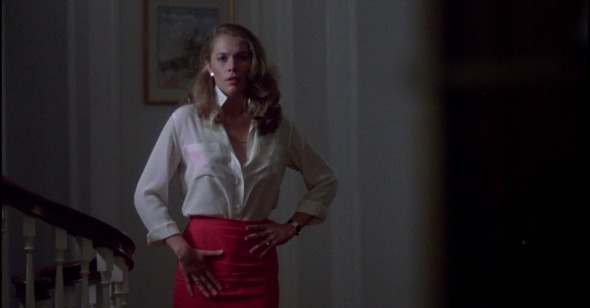 It’s hard to recall many films as primordially sweaty, delightfully trashy, and deeply Floridian as Body Heat. With its actors’ skin slicked in a fine layer of perspiration and subtext flung out the window into the airless summer night, Lawrence Kasdan’s 1981 debut lacks in subtlety what it makes up for in atmosphere. It is the film that launched a thousand sunshine neo-noirs, from the venerable (To Live and Die in L.A.) to the disreputable (The Paperboy). It made Kathleen Turner, hitherto unknown, into a star. And the plot is of a fine vintage: a loose reworking of James M. Cain’s Double Indemnity. An affluent woman honeytraps a clueless man into murdering her husband for her, thus leaving her the sole inheritor of his large estate. Things, inevitably, go south.

And what better place for that to happen than the Sunshine State? Florida has always been something of an adopted home to hucksters, two-bit conmen, and the like: the perfect place for dodgy real estate agents, arsonist sleazeballs (a young, tousle-haired Mickey Rourke), and low-level attorneys like William Hurt’s Ned Racine. Hurt, sly one moment and vacant the next, is a character from a long line of cinematic himbos/gigolos, often bringing to mind the shrewd-but-not-shrewd-enough energy of William Holden in Sunset Boulevard.

“When it’s hot out, people kill each other,” says Det. Oscar Grace (a bone-weary J.A. Preston), enjoying holding court for his friends, Ned and his soft-shoeing prosecutor buddy Lowenstein (Ted Danson). They are seemingly endlessly amused by the entanglements of their pal, but also voices of (largely ignored) reason. “It’s a crisis atmosphere. People think the old rules don’t count,” the detective continues forebodingly.

The sweltering love affair at the center of Body Heat is one of both bodily and economic exchange. Each person, it turns out, wants something more from the other than meets the eye: not just a mistress but a loaded one; not just a boyfriend but a patsy. And so begins the curdling of seduction and natural attraction into something unintended; and a reversal—though in film noir vernacular, hardly a rare one—of the predatory man for the predatory woman. It’s noteworthy that the film begins with a postcoital motel room scene not worlds away from the ones we will see between Hurt and Turner, but this time it’s Ned with a redheaded local waitress who sulks lightly as she says, “You’re done with me.” This is our introduction to Ned Racine, and Kasdan follows up by repeatedly drawing our attention to his local tomcatting reputation, all blond mustache and wolfish intention. You might even say that his careless attitude is wonderfully revisited upon him, wherein any sexual power he seems to enjoy over the women he beds is so completely used against him that he is, in the final analysis, the one being made a fool of.

Kathleen Turner is rather unbelievably assured in a first-ever feature film role (her husky voice helped secure the part when she auditioned.) She plays Matty Walker, a “well-tended,” married woman with a secret identity from a checkered past. “The important thing I learned from Body Heat was how brave I could be,” Turner later wrote, crediting her own inexperience as key to her fearlessness on set with nudity and sex scenes. From the moment Hurt pushes his hand down between her breasts and below her waist, hands searching over the top of her blouse and skirt, the chemistry between the pair is eye-watering. After the vogue for sexploitation, porno-chic, and softcore films of the 1970s, the visual grammar of the mainstream Hollywood sex scene would be forever changed, and you can see it in the soft-focus pleasures of Turner’s ravished face in close-up as she urges: “Please, Ned, do it.”

Throughout, Kasdan employs the expressive visual symbols of noir—the gun, the hat, the angular knifepoint or geometric shadow, white satin sheets and red-tipped fingernails gripping them. Impressively, Body Heat manages to toe the line—nay, straddle it—between glossy melodrama and shivery, organic sensuality. (In its most famous scene, Ned hurls a chair through a glass door to get to Matty and make love to her, shattering the self-contained neatness that appears to define Matty’s married life.) It’s a film that captures the pleasurable ache of sexual infatuation, where bursts of self-generated warmth seem to engulf the limbs even before the mercury begins to climb. The couple’s first conversation is shot through with an electric frisson and wit reminiscent of the classic Bogie-Bacall exchanges: “I’m a married woman. I’m not looking for company,” she says. “Then you should have said I’m a happily married woman,” he replies.

The two move in an elegantly choreographed proximity to one another, inexorable circles that draw them closer: Turner lifting her hair from the nape of her neck in an attempt to cool down, Hurt watching her with ill-guarded hunger, Turner knowing he’s looking and performing accordingly. Turner first walks out of an evening bandstand and onto the beachfront in a crisp white wrap dress: the clothes feel like a pretty self-evident homage to Lana Turner’s all-white ensemble in The Postman Always Rings Twice, James M. Cain’s other great story of adultery and murder. (In fact, that story too was remade by Bob Rafelson the same year; 1981 seemed to become the inadvertent high-water mark for American neo-noir.)

Matty’s appearance borrows straight from the film noir playbook of the eroticized woman: our first look at her is from Ned’s point of view as he leans on the railing nearby. Her loosely coiffed hair is only lightly mussed by the breeze, and she looks startlingly ice-cool and starched. You almost want to mess her up, and that happens soon enough: a cherry shaved ice spilled right down her lapel, like diluted blood. Perhaps she’s making gestures we could attribute to textbook “male gaze” pandering. But they’re also, invariably, the same gestures a woman may make in real life as she’s watched by a man she desires.

Sleaze, thick as city smog, is as essential an ingredient as shadow to neo-noirs, erotic thrillers, and other permutations of this storied wartime genre. That the sleaze magnified as the decades wore on and audiences grew thirstier for sex is inevitable, but Body Heat pounces on the opportunity to show more skin that was possible in the heyday of the noir. Its earthy sensuality finds a way of burning itself in the memory. There are teeth-gritting jokes between Ned and his pals about a little girl walking in on his receiving a blow job, or the simple directness of Ned talking about being “red and sore” and “thinking it’s gonna fall off,” while Matty replies curtly, “You’re sore? The nerve.”

Even today there’s something cathartic—and sexy—about hearing this stuff said aloud: the film’s dialogue is both practical and carnal. As the affair rages on, Matty’s older husband, Edmund (Richard Crenna) is away with work most of the time. Matty begins to drop hints, growing strategically more breathless and needy about her marital desperation. Before long, Ned is saying things like: “That man is going to die. For no reason but we want him dead.” Thus, the plan is hatched to have Edmund die in a fire, helped by a former ex-con client who knows a thing or two about arson. (Rourke, in a very early role, is perfect as the restless, straight-talking criminal side-eyeing Ned’s plans.) If you want to know what Kasdan makes of Ned Racine, check out Fellini-esque moment when a man in full clown makeup drives by, Hurt looking from the sidewalk with a mystified gaze.

Suspicious of Ned after their chance meeting in a restaurant, Edmund pointedly talks about his work, clearly white-collar crime of some kind. “Lots of guys you run into…they wanna get rich quick. But they don’t want to do what’s necessary. Whatever’s necessary,” Edmund says. In 1981 Florida, with the gradual national encroachment of cutthroat Reagan-era economic self-preservation, each of the three main players in Body Heat’s love triangle are experts at doing whatever is necessary. The key distinction between the three is that while the two men at the table are puffing out their chests and measuring their dicks, soon to be either dead or in prison, the woman who’s slipped off to the powder room—joking about changing the subject to pantyhose—will be the one to really cash in. Ned only discovers her scheme when it’s too late: that Matty isn’t “Matty” at all, but one Mary Ann Simpson, having stolen a high school girlfriend’s identity.

“So, you’ve decided to use your incompetence as a weapon,” Ned’s buddy Lowenstein jokes to him at one point. That incompetence turns out to be a rather effective—and blunt—weapon in the capable hands of Matty Walker. Or whatever her name is.