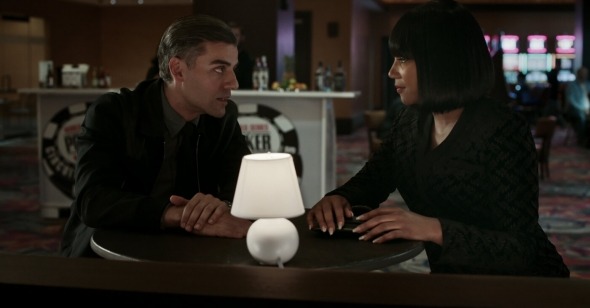 The Private Circle
By Christina Newland

The Card Counter, the latest film from Paul Schrader, is undeniably auteurist—to the extent that it flirts with self-parody. Its familiar elements include a concern for collective American moral ruin, a fascination with Dostoyevsky’s “God’s Lonely Man,” and a toolbox of visual mannerisms borrowed from Robert Bresson. It has a spiritual kinship with Schrader’s First Reformed in its indictment of the inner rot of the American status quo, and a thematic kinship, in flashes, with Taxi Driver, which Schrader wrote rather than directed, but which he apes liberally in scenes of the ascetic former Private First Class William Tillich (Oscar Isaac) writing a diary, lying catatonic in bed, and most of all in the sense that Tillich is moving inevitably toward violence.

After spending the better part of a decade in Leavenworth military prison, Tillich has changed his name to William “Bill” Tell. He drifts in solitude from one gambling joint to the next, taking in small wins to maintain a quiet, itinerant life for himself. His enigmatic skill at the card table draws the attention of La Linda (Tiffany Haddish), a handler who manages stables of pro players and helps get them backed by rich investors. And while Tillich initially expresses his disinterest in being tied to any of these moneymen, he changes his mind when he meets a disheveled young man, Cirk Beaufort (Tye Sheridan, with a thousand-yard stare), nicknamed “The Kid,” who seems to be sleepwalking through life with little money or ambition.

The fact is that Tillich’s history is infamous, and The Kid knows all about it. Back when he was PFC Tillich, the gambler was posted at Abu Ghraib prison in Iraq, taking part in “enhanced interrogation” at the behest of his commanding officers. Shown heartlessly mugging for the camera in the images of squalor and degradation leaked to the media, he was punished with a long prison sentence. But in Tillich’s estimation, no punishment will salve the psychic wounds of his crimes. The Kid is determined that punishment be meted out to a higher echelon of military brass, specifically an officer named Major Gordo (Willem Dafoe). Gordo was Tillich's commander in Iraq, and he was also, as it turns out, the man who trained The Kid’s father. As The Kid tells Tillich: “The apples weren’t bad. The whole barrel they came from was bad.” But Tillich wants nothing to do with the sins of the past; he wants only to gamble his way into enough money to send The Kid down a better path.

Tillich is not like the stereotypical PTSD-case we see often represented in film and television, though trauma seems to be churning under his smooth surface. This man does not stammer or shake. Extreme control pervades his choices, from his sleek, neutral wardrobe to his bizarre compunction to cover every piece of furniture in his motel rooms with white sheets, as though he were about to either record a podcast or commit a murder. Calculation is Tillich’s whole job as a professional gambler, and it came in handy in his previous job, too. He measures the comparisons between professions in a scene of typical creased intensity, gazing at The Kid and imparting dark wisdom in his own oblique way. A gambler can “tilt”—get carried away with winning and make silly choices—just as an interrogator can “force drift”: get caught up in his power and inflict increasing violence with fewer results. He seems to be trying to tell The Kid not to release this corrosive force in himself. He knows too well that this corrupting power is a sort of oil spill of the soul that can’t be mopped up.

Oscar Isaac is a marvel in this role, self-contained and coiled, a human ruin in a handsome costume. With his low center of gravity, he holds himself in constant tension, brow furrowed and jaw clenched. It’s not a military bearing as such, but a kind of vestigial firmness that he’s unable to loosen. His later revelation that he seems to have chosen celibacy post-prison is another form of punishment, of Calvinist self-denial that Schrader knows so well. This push to purge oneself through suffering becomes all the more palpable by the film’s bloody conclusion.

With occasional, agonizingly slow zooms in on his subjects, Schrader reveals the weight these people carry around, as in one arresting monologue from Isaac. Almost perversely welcoming The Kid into his memories, he begins to recall the "smell, the noise, the shit," of Iraq and of Abu Ghraib. Words spout, stream of consciousness–style, from Tillich’s lips; he looks at The Kid and does not seem to see him. “Nothing. Nothing can justify what we did,” he says, eyes red-rimmed. And he’s right.

As Tillich, the Kid, and La Linda travel from one game to another, it becomes clear that a certain self-conscious ugliness is a part of the film’s aesthetic; it’s almost willfully anti-nostalgia. This is not the sort of gambling depicted in Bugsy or Casino, or some knowingly grimy seventies American throwback. It is gambling in daytime strip malls populated by retirees and guys in wife-beaters. Tillich and company spend their days in bland Super 6 motels, drinking day-old coffee; everywhere, cavernously empty poker halls and nondescript sports bars loom. Schrader is equally sparse with his visual flourishes, barring a few overt departures (a dazzling, quasi-romantic walk through gardens sparkling with fairy lights); the palette is monochrome, his pacing deliberate and camera often static, framed with an eye toward neatness that Tillich himself would likely appreciate. The Bressonian close-ups on hands, the minimal camera movement, and the allowance of bodies to move within a fixed composition are all echoed here as they are in First Reformed.

There is a satisfyingly circular internal logic to Schrader’s world. This is probably most evident in the way that Tillich’s opening voiceover takes on new layers of meaning by the conclusion. The narrative’s structural circularity seems overwhelming at times, from the quotidian nature of the turns taken during a card game to Tillich’s night-time Abu Ghraib flashbacks, filmed in the maze-like structure Schrader designed for the film. They were made, the filmmaker said, not to copy the authentic location but to heighten the disorienting horror of being trapped within them. Soundtracked to the noxiously loud heavy metal used by soldiers to heighten sleep deprivation and auditory strain, the scenes employ bulbous fish-eye lenses. And one remark always seems to meet another, coming, as they say, “full circle”: Tillich makes comments about the moral debts he accrues, and then later mentions to La Linda that The Kid, too, “has debts” he plans to help with. Of course, a circle is harmonious, but it has no exits; apt for a film so zeroed in on incarceration, literal and spiritual.

At the ending, once again, Schrader borrows from the Bresson kiss-off of Pickpocket (1959), a conclusion which works so beautifully in American Gigolo (1980). In The Card Counter it is deployed less with a headfirst rush into tenderness than with a tentative fingertip at the window; a striving for basic connection that has eluded Tillich up until now. Its use almost feels pointed, as if to say: here it is again, this so-called redemption. What is there to do but try, even when the odds become this narrow?

A less charitable viewer could say this is a “if it ain’t broke, don’t fix it” approach, or even a lazy one. But Schrader’s Bressonian “redemption”—and his repeated use of it—is pointed. “Repetition” is a word that The Kid uses to describe the lifestyle of these drifting gamblers. As La Linda, Tillich, and The Kid move through city after city, facing down unlovely rooms and unsatisfying conclusions, Tillich is forced to realize that it is not always possible to salve the old wounds, to regain lost innocence, or to temper the impulsive violence of young American men seemingly hellbent on destruction. In its heart-wrenching climax, its concentric structure, and its own feedback loop of despair, The Card Counter allows Schrader to remark on Tillich and Tillich to remark on Schrader.

“It just doesn’t feel like it’s going anywhere,” says The Kid, when Tillich asks him about their journey on the gambling circuit. Tillich replies to him with a gesture, making an invisible circle with his hand. “You just go round and round,” he answers. “Until you work things out.”