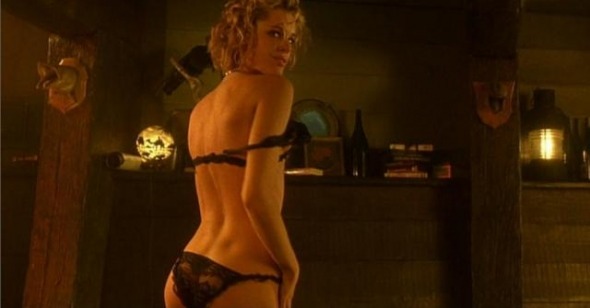 John Updike wrote—and he’s not the first to express the idea—that “the willingness to risk excess on behalf of one’s obsessions is what distinguishes artists from entertainers.” If that measuring stick, as good a one as I know, is to be taken literally, then Brian De Palma has to be one of the most potent film artists working. His style is excess defined; how many filmmakers have so consistently courted the ridiculous in the name of the sublime? In this he has only Jean-Claude Brisseau as his peer.

Contradictions abound. Even four decades deep in his career, if you prick up your ears after a De Palma film’s finished unspooling, you can rely on some bright boy ready with the line that probably premiered along with Sisters: “All style, no substance.” The possibility that those concepts could be extricable from one another is, of course, alien to De Palma’s agenda (as would be, I imagine, Updike’s clean delineation between artists and entertainers). If you need an example of how recklessly the director ignores imaginary borders, I recommend Body Double—the film introduces itself as deliberate kitsch with the monster movie font of the opening credits, evolves into one of the most swooning, emotionally committed portraits of erotic obsession that you’ll ever see, then concludes... on the set of a Z-grade horror flick, on a close-up of shower-slick fake tits with stage blood cascading over them! De Palma seems to revel in his own lack of hang-ups, in the smooth shifting between modes—farce and absolute commitment. An open-minded viewer can shake off a lot of arbitrary expectations of what makes a movie “good” by getting swept along by his liberation. Where does De Palma stand? If he’s pandering, why is he so often unpopular? The ultimate badge of honor for a noteworthy American director: he has never won an Oscar, and he never will.

The magnificent Femme Fatale, released in 2002 to split reviews (most of the raves did come from big bylines) and indifferent box office, is a strong competitor for the title of De Palma’s Most Indulgent Movie. It’s a gauche showroom of the pet preoccupations that any true fan can recite with alacrity: split personality, voyeurism, stylishly imperiled women—and all done up in brazenly smutty fashion. It’s a bountiful film, one to which the only proper reaction is a giggle of delight and, depending on your predilections, a solid hard-on: the film’s opening, an agile set piece following a jewel heist at Cannes’ Palais du Cinema, is a checklist of what pleasures moviegoing can afford: of movement (the camerawork is weightless), of the aural (composer Ryuichi Sakamoto’s slinky bolero), of the erotic (Rie Rasmussen and Rebecca Romijn-Stamos, both Victoria’s Secret vets, open-mouth tongue-wrestling in a bathroom stall).

The job goes haywire, ending on a double cross; Laure (Romijn-Stamos) escapes with the goods, and the job’s architect (Eriq Ebouaney) winds up in prison, to brood at length upon revenge. In a piece of surreal serendipity, on-the-lam Laure falls under the protection of a Parisian family that mistakes her for their missing daughter-in-law, bereaved after the death of her husband and child. When our heroine sees a framed photo of her body double in happier times, she could be looking at an alternate reality’s version of herself. Left alone in the family flat, Laure’s the only witness present when her alter-ego steps in from a downpour; she watches with a strangled gasp as the poor girl blows her brains out, effectively willing Laure a passport and a new lease on life.

Seven Years Later (2008, for anyone keeping track): Laure’s old associates are out of prison and looking to settle scores—in one of the movie’s most zanily pleasurable details, ringleader Ebouaney steps off the prison bus at a countryside crossroads, wearing the same bloodstained tuxedo we saw him attend Cannes in. Now the wife of the American ambassador, Laure’s put in the public eye at a most inopportune moment by paparazzo Nicolas (Antonio Banderas). Stringing him along by waggling her ass, carrot-on-a-string style, Laure manages to stay ahead of the heat for awhile, but circumstances eventually fold in on her, she’s tossed into the Seine, and flash (and, spoiler warning, here’s De Palma’s launch-into-lunacy moment) it turns out everything that’s come since she was first taken in by her doppelganger’s family, at least an hour of screen time, has all been a dream, maybe a premonition—the movie rewinds into a second chance. To say this act of narrative severance, coming not long after David Lynch’s similarly brokeback Mulholland Drive, which also reconfigured noir tropes around its director’s preoccupations, was met with mixed reaction would be a massive understatement. Many reviewers and viewers, judging from their reactions, found the strategy roughly akin to being shit on. (In a Film Comment interview, De Palma calls the maneuver his “Woman in the Window trick,” but that doesn’t nearly do it justice.)

De Palma knows more than almost anyone that suspense is a game of inches—the defining moments of his oeuvre are his slow-motion Rube Goldberg set pieces of compressed time, in which we see a string of individual elements set into parallel motion, then crosscut while they roll toward consequence. The baby carriage clacking down the steps in The Untouchables; Raising Cain’s tiered motel climax with a threatening sundial and, again, an imperiled baby carriage; Angie Dickinson’s last gasp for help from the elevator floor in Dressed to Kill—in each of these signature scenes, only the minutest of distances and the laws of kinesis separate irreversible tragedy from heroic rescue.

Femme Fatale’s diptych structure creates a karmic lesson in its own hair’s-breadth moment, a shakedown in a public square that, as initially played, ends with Laure’s partner-in-crime getting smeared by a passing truck. In the film’s “first draft” of Laure’s escape, as she plays passive spectator to her double’s suicide, a series of events are set in motion that terminate in her own death. In the second go-around, awakened and hipped by her prophetic dream, she intervenes, and her moral choice (well, kind of: “I’ve seen the future, and it sucks”) provides the ever-so-slight recalibration to the mechanism of causation that makes the necessary difference. The same shakedown, again: light hits a trinket on a trucker’s rear-view window—a gift from Laure’s saved “twin,” Lily, who he’d picked up while hitchhiking—the driver flinches, and the baddies are ripely splattered instead.

In fact, Laure’s seen the future more than once: Fatale opens on Romijn-Stamos watching Barbara Stanwyck’s death scene in Double Indemnity—she knows full well what bad girls get in the movies. What happens to her isn’t exactly redemption, though: just a scenario that allows a femme fatale to come out on top without going “rotten to the core.”

De Palma’s famously unabashed about channeling the ghosts of Hollywood past through his filmmaking; when Nicolas takes to trailing Laure, Sakamoto’s score overtly emulates Bernard Herrmann emulating Wagner. Rather than dwell on this, let’s note that the terrain of Femme Fatale, De Palma’s first fully made-in-Europe production, makes it easier to notice how the borderline avant-garde illogic of his filmmaking (he’s called Femme a “surrealistic rethinking of the noir form”) puts him in the company of some less critically esteemed contemporaries who’d begun reprocessing Hitch at the same time he started to: the Eurothriller and giallo directors. Though Femme Fatale spends most of its time within Paris city limits, it never feels particularly “French”; maybe it’s Banderas and Romijn-Stamos; maybe it’s the vaguely Italian-seeming plaza that Banderas’s balcony overlooks—or maybe it’s the far richer antecedent that Italian movies have for producing this kind of extravagant trash. The connections aren’t so tenuous: De Palma’s frequent collaborator, composer Pino Donaggio, has been picked in the past to work with the rather disreputable likes of Lucio Fulci, Michele Soavi, Ruggero Deodato, and Dario Argento (whose goofily titled latest work, Do You Like Hitchcock?, might be the caption to De Palma’s career—they’ve both poached Blow-Up, too!); and I would swear that Banderas’s obsessive photographer, forever reshooting the view from his apartment, is a derivation of Ray Lovelock’s character in Armando Crispino’s delirious 1975 giallo Autopsy.

Style vs. substance. I have said what Femme Fatale is about, but again, I haven’t. De Palma, per the photographer Duane Michaels, has “always been a victim of beauty, wounded by perfection,” and his lavish style—for we fans, a justification for exposing film stock in itself—is an ever-crackling conversation on the subject, moving between gauzy idolatry and the orgiastic sacrilege of death. This is another way of saying the movie is about beautiful objects: Rasmussen’s long stems in stride, posh Dolce & Gabana couture, the remarkable physical presence of Romijn-Stamos’s runway-honed body in a nasty striptease. I know there are people who demand something else from a movie, but I can’t fathom anything more worthwhile.