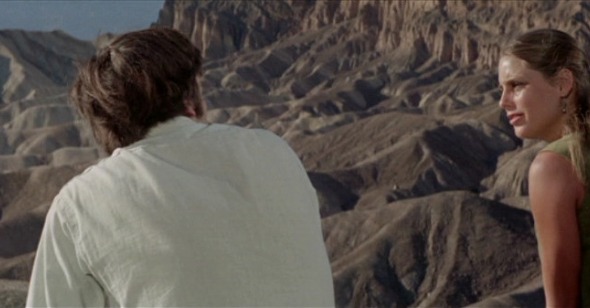 Zabriskie Point is arguably Michelangelo Antonioni's most divisive work. Inspired by the wild success of Blow-Up, MGM produced Zabriskie Point for $7 million, an extremely high budget for the time (for perspective, Blow-Up, also produced by MGM just a few years before, cost $1.5 million). The production was highly scrutinized: it was Antonioni's first film made in the United States. Antonioni’s anti-capitalist sentiments had the studio and government officials on alert and it took an epic two years to complete. When it was finally released in 1970, the film was panned by critics. Chester Crill, a musician from the band Kaleidoscope (who contributed to the soundtrack), remembered how horrified everyone was after seeing it for the first time: “There wasn't a person who left that was looking anyone else in the eye. It was the most embarrassing thing that I'd ever been to. Everybody just slunk away.” History has been kinder to the film and its unpolished portrayal of late 1960s counterculture youth, and while there still might be some stigma of shame attached to admitting it is your favorite Antonioni film, it's at least now acknowledged as a crucial piece in a great director's oeuvre.

There are three standout sequences in the film to which I frequently return. The first is the opening, in which a vérité-style camera follows a debate between white liberal hippies and Black Panthers (led by Kathleen Cleaver of the actual Black Panthers) as they plan an intervention on their college campus. The debate verges on the mundane, filled with in-fighting and unnecessary details, yet it is very much alive, somewhat reminiscent of Frederick Wiseman's institutional documentaries of the same period such as High School (1969) and Law and Order (1969). Perhaps the most obvious highlight sequence is the finale, a fantasy slow-motion destruction of the modernist house on the desert hill, repeated from various vantage points over dreamy Pink Floyd music. This ending is powerful, not only because it is visually remarkable but also because it makes a graphic statement about the stunted force of a generation’s frustrations: you can fantasize that the house explodes, but in reality it will always loom there.

Garcia’s guitar slows, the camera leaves the other couples in a wide shot in the sand and cuts to Mark and Daria sitting on the top of a ridge in a postcoital moment of calm. Mark says, “I always knew it would be like this.” “Love?” Daria asks. “The desert,” he replies. Reality has fully returned. At this moment the camera cuts to the nearby parking lot: in drives a rumbling Dodge with a camper and motorboat in tow, passing by Daria's much older and outdated coupe before parking nearby. A young fair-haired boy holds a dripping ice cream cone and looks out from the backseat window. His expression is blank, his face perfectly framed by a series of stickers, ostensibly collected over the family's road trip. The camera gently studies the window in an extreme close-up, panning across the illustrated summary of the family's vacation: Palm Springs, California (“America’s Foremost Desert Resort”); a scantily clad cartoon cowgirl from Colorado peering back in a pinup pose; Arizona, Discover America; Grand Canyon; World Famous Bull Shipping Center in Texas; Arches of Utah; another pinup from Oklahoma, complete with two pistols and a bandana bikini. It's easy to imagine that the boy saw every one of these sights through the glass of his backseat window in the same way he is seeing at this moment: mediated and unengaged.

The mom and dad exit the car and walk to the lookout spot; they wear brightly colored clothes and are squeaky clean. They barely have time to take in the scenery before the dad quips with a chuckle, “They should build a drive-in up here, they’d make a mint.” “Why don't you do it?” the dutiful wife responds. “Who me?” the everyman sloughs off the suggestion with false humility and pulls out his camera to snap a photo before wandering back to the car. Alone, the wife lingers for a moment longer, looking out over the sweeping dunes. The camera follows her gaze and then takes its own course, panning across the landscape and zooming in until it finally reaches Mark and Daria, who are scrambling back up the ridge. The sound of a car door slams, the engine starts, and as the couple reaches the top, the blue of the Dodge blurs past; the family continues its tour acquiring landscapes across America. As the Dodge makes its exit from the parking lot, the feet of Mark and Daria are revealed approaching closer.

This scene is not without its blemishes; it contains some of the weakest acting in a film that has not been historically praised for its performances. The orgy, which lasts a full seven minutes onscreen, is not sensual at all—nearly 50 years on, it reads as more comical than anything (though in all fairness it should be noted that even in 1970 some were unimpressed—Vincent Canby’s New York Times review referred to it as “unintentionally funny”). Yet the moment when the family pulls up in the Dodge is so sublimely emblematic of the era’s defining culture clash that the awkward fumbling earlier in the sequence immediately becomes an essential part, concisely revealing the cognitive disconnect that occurs when members of society don't understand one another. For a brief instant two distinct realities share a coherent space and time. The two sides never interact, they don't have to; here it's enough for them to brush up against each other.

Somehow in their passing non-encounter, each side’s deficiencies are more eloquently expressed. Mark and Daria experience the landscape, they rub it into their skin; the road tripping family instead seeks to acquire the experience of it (snap a photo, buy a sticker, tell friends back home). But how different are Mark and Daria's life choices than those of the couple with the blue Dodge? Mark, on his “reality trip,” and Daria, with her free-flowing waves of thought, don't actually have a whole lot to say: “So anyway, so anyway,” Daria says. “What?” Mark asks. “'So anyway' ought to be one word, the name of some place or a river. Soanyway River.” It is apparent that their frustrations make little impact on the structures that move the world around them. They are adrift, without a map, knowing more what they don't want than what they do.

Between the documentary-like opening and an ending that dwells fully in an imaginary realm, this Death Valley sequence acts as a sort of turning point. Antonioni uses the landscape and slow rhythms of nature to create a suspended sense of time. He cuts between wide shots of the landscape and close-ups of the human action and dialogue. Sometimes the wide shots are just of the landscape, and sometimes the characters are only tiny specs in it. The entire sequence, including the orgy, feels like it's happening more or less in real time, but the endless expanse of the desert undermines this sense of reality: they have always been there, will always be there, as will the couple with the Dodge. The striking beauty and vast scale of the natural environment make the lives that pass over it seem all the more insignificant. The desert is as indifferent to the pursuits of the pseudo-revolutionaries and hippies as it is to the pursuits of middle Americans chasing an American dream. Everything is ephemeral.