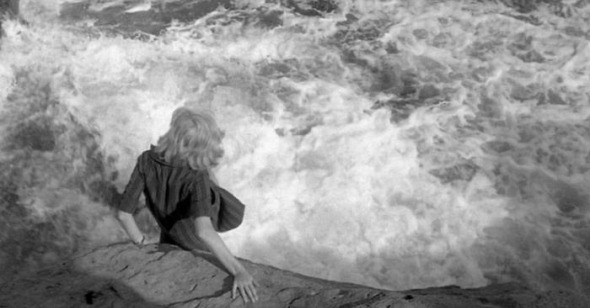 Chronicle of a Disappearance
Max Nelson on L’avventura

Coming to Michelangelo Antonioni’s L’avventura today means having to strip away a great many preconceptions—about Antonioni’s status as a model genius-auteur, about his alleged association with a certain strand of high-end art-house elitism, and about the presumed chilliness and anti-expressiveness of the films he made in the remarkably fruitful ten years between Il Grido (1957) and Blow-Up (1966). Just as Bergman has been typecast as an avatar of Scandinavian doom-and-gloom, or Tarkovsky reduced to a peddler of molasses-slow Russian mysticism, Antonioni has been effectively split in two by his success. Over the years, his sixties films have been reduced to exercises in stone-faced ennui in which beautiful, impassive victims of the modern world stare at points just beyond the frame while the director dares us to guess at their thoughts or motivations. If this is the first Antonioni, the foreboding modernist prophet, then where is the second? And how different are the two?

Rewatching L’avventura, it’s clear that—whatever else he might have been—Antonioni was neither chilly nor anti-expressive. He had a knack at lighting and framing his actors for maximum emotional transparency, but he also recognized that moments of true self-disclosure are rare and often accidental. His characters are always concealing themselves, bottling up their passions, or wearing their faces like masks—and one of his innovations was to give an inwardly expressive quality even to these moments of public emotional withdrawal. In L’avventura, this effect is largely thanks to Monica Vitti’s sublimely uninhibited performance. She always looks as if she’s struggling to contain an outburst of feeling that’s just on the verge of coming to light: witness her ecstatic smiles during a bout of frantic outdoor lovemaking, or the way she sings along hysterically to the radio while dressing in a cramped hotel room, or the proud, defiant stance she stakes out at the edge of an island cliff, calling out for her missing friend.

Antonioni’s forbidding reputation probably has less to do with the way he films his characters straight-up, and more with the uniquely unfriendly environments he creates around them. L’avventura is full of young, youthful, warm-blooded people stuck in sterile and inhospitable landscapes. It’s just that there’s something inside these people—some desire or need or capacity—that the world beyond them doesn’t account for; or, more radically, that there’s some absence inside the people themselves for which their barren surroundings are just a convenient mirror or a visual corollary. In L’Avventura’s justly famous forty-minute centerpiece scene, a volcanic island (essentially a heap of jutting, craggy rocks) becomes a stand-in for, among many other things, the modern condition, the individual mind, and the human soul. It’s the worst of all possible worlds: a mixture of dizzyingly open spaces and claustrophobic crevices, perilous drop-offs and narrow ravines and unexpected gaps in the rock. Civilization, in the form of an ancient hut owned by a lone fisherman and filled with faded photographs, barely has a foothold.

This is the unlikely day-trip destination of seven upper-class Italians: dissatisfied beauty Anna (Lea Massari), her fiancé Sandro (Gabriele Ferzetti), her best friend Claudia (Vitti), and two other couples, both thoroughly miserable. After an argument with Sandro, Anna strides off over the crest of a rock and disappears without a trace. The group look around for an agonizingly tense half-hour of screen-time, fail to find her, and go home. Back in mainland Italy, Sandro and Claudia keep up the search; within three days, they’ve started an affair. Tips and leads peter out, interest wanes, memory fades. As the film wears on, Anna’s absence starts to register as something wider and less specific: a gap in the structure of daily life that has to be felt out blindly and navigated clumsily around. The central absence of L’avventura—an absence that both eclipses and predates Anna’s disappearance—isn’t exactly the absence of anything definable (or even, perhaps, imaginable). Whatever it is, Claudia et al. spend less time trying to name it than they do desperately missing it; wanting it; compensating for it.

For Antonioni’s protagonists, common compensations include faith (“This is a good sign, don’t you think?” babbles Anna’s desperate dad when he’s told that his daughter had packed a copy of the Bible with her. “It must mean she believes in God—so we can rule out the suicide hypothesis, right?”), marriage (three days after losing his fiancée, Carlo proposes to her best friend), and, above all, romantic love. Antonioni famously proclaimed at L’avventura’s Cannes premiere that “Eros is sick.” In L’avventura, the symptoms are everywhere: in the “truth” Anna’s father tells her in the film’s opening scene, though he claims she already knows it (“That guy— he’ll never marry you”), and in her reply (“Up to now, I didn’t want to marry him”); in the clinical interactions between the two other island-bound couples, in the sleazy painter whose art isn’t much more than a pretense to watch girls undress; in the hordes of men who, poised in dead air like Hitchcock’s birds, stare Claudia silently down in the street; in the way Vitti tosses her head back and forth during sex to avoid her lover’s touch.

It’s as if Antonioni can’t help but slightly disdain those people lucky (read: stupid) enough to convince themselves that they can fill their lives with meaning by pursuing a significant other—or, for that matter, a Heavenly Father. But he can’t help envying them at the same time, since the alternative, he suggests, is to drift aimlessly around in constant, painful awareness of an absence you can’t fill or name. All L’avventura’s central trio seem to do is swim, make love, dress, undress, cheat on the lovers they wished they really cared for and betray the friends they thought they really loved. Claudia stays up one night counting repeatedly to twenty, skipping three each time. Passing a pair of artists in a public square, Sandro overturns their ink bottle out of little more than general, randomly-directed spite. Before her disappearance, Anna sparks a panic by pretending to see a shark in the water because—well, why not?

Like everyone else in the film, Claudia is searching for a kind of transcendence, or at least wishing that the immanent was a little more satisfying. Unlike the rest of them, when she conceives of satisfaction (let alone transcendence) as something attainable, she knows she’s fooling herself. She’s drawn to Sandro, we suspect, because she sees that he knows it, too. What they know is that they each have their own private share in that absence at the heart of the world; that they’re too shallow to love, or too empty and too deep. “How can it be that it takes so little to change, to forget?” she asks him. “I think the only way we can help each other,” he replies obliquely, “is by staying together.” They’re both self-aware enough to know when they’re temporarily letting themselves believe in love, and each cynical enough to know when the other is putting them on. (Fittingly, they make their first real connection snickering over the romantic naïveté of a pair of country bumpkins.) Their affair is alternately a kind of performance and an attempt to move beyond performance, to arrive at a meaningful relationship unfalsified by what they (and, one senses, Antonioni) would consider the compensatory specters of marriage and romance. Late in the film, they have a telling exchange. She’s getting ready for bed; he’s heading downstairs to a party:

An aborted variation of this same conversation takes place between Sandro and Claudia earlier in the film. He refuses to confess his love—“You know, so why should I tell you?”—and his evasive reply is, for all intents and purposes, a denial. She takes it as such, staring into space for ten very long seconds, letting his “why?” sink in, then giving the camera a heartbreaking shrug. How, then—if he really doesn’t love her—should we understand this later exchange?

Perhaps Sandro rebukes Claudia not for asking him to acknowledge an evident truth, but for asking him to acknowledge an evident lie. Essentially, he’s punishing her for having subjected their fragile mutual performance to more pressure than it could take. She, after all, knows as well as he does that in their world there’s no such thing as love, or at least that neither of them are capable of it. Her second demand, then, can be taken as a kind of rebellion—one of those rare moments in which Antonioni’s heroes let their passions boil over beyond the bounds of reason or tact. In the hands of a lesser filmmaker, Claudia’s “I deserved that” might have been the end of the exchange. But Antonioni takes things one step further: Sandro leaves the room, then opens the door a crack, peeks his head back in, and tells her that he’s just kidding and yes, of course, he loves her. If he’s lying, at least he’s lying productively; if he can’t promise her love, at least he can promise her comfort. And when, for L’Avventura’s other couples, love is reducible to lust or commerce or mutual what-the-hell-I’m-bored-you’re-bored indifference, reciprocated comfort doesn’t sound like so bad a deal.

How fatalistic is L’Avventura? Of all the European imports to take American film culture by storm in the early sixties, it’s certainly among the most resigned. There’s no climactic moment of self-recognition à la La Dolce vita, none of Tati’s sense of the modern world as a fun but terrifying playground, and no keeping one eye open—as Godard often did—for those moments when the gap-riddled flux of modern life might crystallize into a kind of order. (It’s hard to imagine Antonioni seeing galaxies floating in coffee cups, or letting a Parisian prostitute take on the sanctified stature of Falconetti’s Joan of Arc.) Claudia, Sandro, and Anna might resist the suggestion that love is impossible and faith a joke, rebel against it, deny it, or lash out randomly in response to it—but they can’t fight it. It’s built into Antonioni’s tight, rigid compositions, his exaggerated lengthening of distances between bodies, his camera’s earth-bound inertness, and his habit of loading down his frames with wide, imbalanced stretches of empty space. In this context, happy endings are only possible when they come saturated with resignation and defeat—and yet, by that rather strict standard, L’avventura has one of Antonioni’s happiest. After catching Sandro in flagrante with a nameless female partygoer, Claudia lets him approach her on an otherwise deserted balcony and, after a moment of hesitation, starts to slowly caress the back of his head. Antonioni leaves the couple staring out into a big, loveless world in which survival alone seems like a tall order—and a job for which two are, thankfully, better than one.

L’avventura played September 29 at Museum of the Moving Image as part of Reverse Shot's See It Big series.