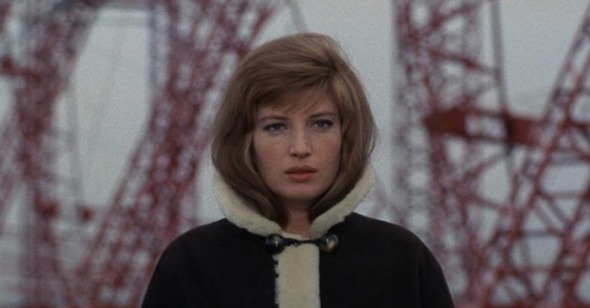 Nineteen sixty-four brought two definitive visions of the apocalypse to the screen: Dr. Strangelove and Red Desert. (Well, maybe three if you were over 50 years old: A Hard Day’s Night.) The former was a sardonic sneer in the face of nuclear annihilation, the latter a baleful wallow in eco-holocaust. Half a century later, Kubrick’s masterpiece remains the better movie, but Antonioni’s picture is more obviously influential. Its experimentations may seem familiar today, but only because they helped shape decades of art cinema to come.

Antonioni’s film was lodged in my memory as an environmental dirge: billows of steam and smoke, ravaged landscapes, people dwarfed by machinery, a woman going mad amid the devastation. But a recent viewing brought back its essential ambiguousness. No green jeremiad this: it’s a movie that’s fascinated—even thrilled—by the new forms of modern industrial life, even as it acknowledges the psychic and physical devastation modernity exacts.

Set in a rapidly industrializing Ravenna, Red Desert could be taking place in Antonioni’s time—or ours. The director’s muse, Monica Vitti, plays Giuliana, a woman who recently survived a car accident and has since been gripped by debilitating neurosis. She spends her days wandering the muddy, desolate terrain with her son, Valerio (Valerio Bartoleschi), fiddling in an empty shop she’s allegedly about to open, and shrinking into corners when the world gets too much. Her husband, Ugo (Carlo Chionetti), seems a cordial presence at best; meanwhile, his colleague, Corrado (Richard Harris), pays her closer attention, which doesn’t escape her notice.

As with all of Antonioni, the plot’s not the thing. The Italian auteur’s first color film, Red Desert may be inert as drama, but it all but vibrates with the excitement of discovery. From Giuliana’s first appearance—her green coat and resplendent red hair (ah, Vitti!) an alien blot on the dismal landscape—to the yellow plumes from smokestacks on which the movie ends, Red Desert is in constant search of ways to convey meaning with shape, color, and movement. As with Scorsese’s recent foray into 3-D, the movie imparts a frisson of discovery—there’s something genuinely thrilling about observing a master play with a new medium.

The most famous detail about the film’s production was Antonioni’s instruction to art director Piero Poletto to paint not just the sets but the natural landscape itself. It’s an act that mirrors the hubris Antonioni captures. Lovingly framing the imposing plants and structures that loom over the Ravenna countryside, Red Desert is a record of man’s monuments to progress—to himself. Its depiction of despoiled nature notwithstanding, the movie finds beauty in the silos and turbines and pipings of modern life. In one scene, Giuliana and Corrado visit a field where radio antennae have been erected, a site more arresting than any stand of trees the camera catches in its gaze. The fascination extends to the gadgets in Valerio’s room, where Ugo shows his son how to play with a spinning top powered by a gyroscope.

That perpetual motion machine that spins in place ends up being a metaphor for the film. Setting it in a port town was a deliberate choice. Paralyzed by anxiety, Giuliana drifts through the streets dreaming of escape—a desire represented by recurring shots of ships passing outside windows (planting the seeds perhaps for Bertolucci’s excursions into visualizing the subconscious in The Conformist). Corrado for his part concocts a business scheme that will take him all the way to Patagonia. The impulse to flee yields the movie’s loveliest sequence, when Giuliana tells her son a bedtime story about a girl’s idyll on a desert island. The interlude may spoon-feed the subtext to the audience, but it’s a needed oasis amid the unrelenting anhedonia.

“In my films, it’s the people who don’t function properly, it’s not the machines,” Antonioni once told an interviewer. Foregrounding modern man’s angst and peddling unremitting seriousness, Red Desert can seem passé. (And slow—what some see as painterly, others liken to watching paint dry.) It’s the curse of the influential: what was once groundbreaking will have lost its luster once its innovations have been internalized by what follows. Todd Haynes’s Safe, about the breakdown of a California housewife, is a direct descendant and a better film—but there’s no denying that it would never have existed without Antonioni’s pioneering effort.

I’ve seen Red Desert a couple of times in different formats, and it’s no contest: the big-screen viewing in a theater remains the most indelible. It’s a movie designed to engulf you; cropping it into dimensions safe for domestic viewing tames the movie. Bracketed by two trilogies in the Antonioni oeuvre—the black-and-white and Italy-bound L’avventura, La notte, and L’eclisse on one end, the color and internationally flavored Blow-Up, Zabriskie Point, and The Passenger on the other—Red Desert feels like a transitional work. And more still: its groundbreaking use of color and embrace of abstraction seem to represent nothing less than an evolutionary leap—for the artist, yes, but also for the cinema itself.

Red Desert played April 6 at the Museum of the Moving Image as part of the series See It Big, co-presented by Reverse Shot.