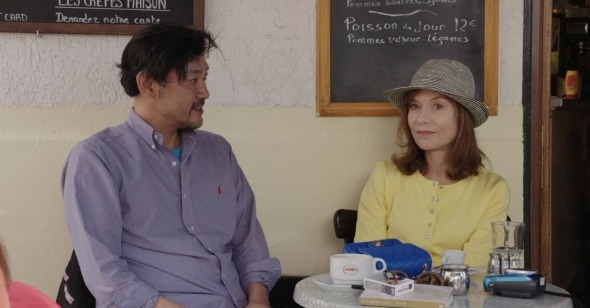 The Bigger Picture
By Daniel Witkin

Watch a lot of movies with subtitles, and you may find yourself getting funny ideas about language. The regular viewer of foreign films acquires the power to decipher distant tongues, even if unable to identify where one word ends and another begins. By a sort of tacit agreement, we accept our ability to essentially understand dialogues unraveling in Romanian, Farsi, or Mandarin, without giving too much thought to questions of translation. This is an understandable compromise with reality—film, after all, is a visual medium, and yet it also necessarily bestows meaning upon details, including verbal nuance. It’s flattering neither to our own powers of comprehension nor to the universalizing claims of international film culture to admit that we may be missing something. This courts a sort of projection on behalf of the viewer, a certain aura that might itself be lost were one to contend with the concrete actuality of individual words.

Hong Sang-soo may not be able to resolve this minor quandary, but in Claire’s Camera he does treat his audience to a French pronunciation lesson from none other than Isabelle Huppert, a veritable avatar for international cinema. As the eponymous character, Huppert teaches So (Jung Jin-young), another of Hong’s horny, hapless males, to recite an excerpt from Marguerite Duras’s posthumous book No More. His failures force her to repeat herself, clarifying each syllable as she does so. It’s a mundane, quotidian exercise, and yet those non-Francophone moviegoers who have seen Huppert speak quite a bit of French will likely never have gotten so clear a sense of what she’s actually saying.

Claire’s Camera thrives on translation, communication, and perception. Like the screwball comedies of yore, it revolves around a romantic conflict that its protagonist does not fully comprehend, though in Hong’s film this situation is reduced from the fanciful to the quotidian. Manhee (Kim Min-hee), a “film sales person,” is fired while on the job at Cannes. Her boss Yanghye (Chang Mi-hee) offers only a flimsy yet evocative pretext, saying that she no longer believes that Manhee is an honest person. As it turns out, she’s in love with So, the filmmaker they’re in town to promote, and whom Manhee has drunkenly bedded. Vacationing music teacher Claire and her trusty polaroid camera float between these characters, helping Manhee to stave off despair and solve the mystery of her canning.

Huppert’s impromptu French lesson aside, most of the movie takes place in a sort of pidgin English; thus translation, usually relegated to a film’s margins, comes awkwardly to the forefront. It’s as if the characters are forced to act as their own subtitles, giving their conversations a directness bumped slightly out of place. Claire’s beachside meet-cute with Manhee has an improvisatory quality, in the sense of those perfunctory dialogues that one is made to stumble through in a second-year language class. It’s a scene that invites a measure of incredulity, getting one of the great performers of Europe together with one of Asia’s hottest new stars so they can call each other pretty and conduct a chat with an uncommonly thorough lack of complexity or subtext:

Hong provides a suitably primitivist framing, squaring them up directly against the sunny blue waters of the Mediterranean. Claire admits that she dabbles in poetry: “You can write poems anytime you want. It’s not difficult.” Manhee, in turn, comes up with a little song about counting.

To my mind, this is a very funny scene. And yet Hong is making it look easy, perhaps too easy. The director has invited criticism along these lines throughout his entire career, and this vulnerability has only become more pronounced as both his stature and his already formidable level of productivity have risen. If there really is all that much to his movies, how come he’s able to turn them around so quickly? Hitchcock called filmmaking a piece of cake, yet the brilliance of his movies was rather immediately apparent. Hong’s films, on the other hand, have an odd, provisional quality that plays out both between and within them—variations on a variation on a theme. In Hong’s previous film with Huppert, In Another Country, the same scenario played out three times, with shots and dialogues recurring throughout each. With its sunshine and Matisse-blue skies, Claire’s Camera certainly appears a Mediterranean idyll. Does all this drinking, flirting, and moping add up to an anytime poem, scribbled out without much difficulty? Is the whole endeavor a protracted flirtation with a lesson never truly learned?

The characters in Claire’s Camera don’t exclusively flaunt the ease of creation. At one point, Manhee encounters a filmmaker friend who worries that she hasn’t matured enough to make a feature. “It’s so hard to make an honest film,” she says, unwittingly mentioning the cause of Manhee’s personal crisis. It’s similarly hard to talk about what constitutes honesty in a movie. There is an autobiographical element to Hong’s work, though its centrality is perhaps overstated. Claire’s Camera takes place within what could firmly be considered the director’s comfort zone, and includes a number of inside jokes pitched at members of the same subculture. Claire is introduced through a brief dialogue in which Huppert, Grand Jury president at the 2009 festival and a fixture of its programming, professes to have never been to Cannes. There’s a brief cameo by Cinema Scope editor and programmer Mark Peranson, which seems to be there to give people who know Mark Peranson the pleasure of recognizing Mark Peranson.

If it’s hard to make honest films, there can be little doubt that Hong is willing to put in the work. The leisurely tenor of Claire’s Camera belies the filmmaker’s workaholic spirit. After many years, Hong has arrived at a very personal method for making his films. He writes his scenes on the day of shooting, and works out the overlying architecture as he goes. This method injects a degree of indeterminacy into his work. Since the actors cannot settle into a fixed idea of their characters ahead of time, they often come to them once they’ve reached the ends of their ropes, in moments that are frequently quite funny or moving. Hong’s method also foregrounds the process of narration, not just in filmmaking but in the ways that people come up with stories to understand their lives.

His films sometimes explicitly mirror this process. The triptych of stories that made up In Another Country were filtered through an onscreen writer character, while Hill of Freedom (2014) turned on a letter cut up into parts. But even in his movies that don’t outline their narrative conceits, one feels the palpable efforts of the filmmaker searching for the story. His trademark zooms and pans help to preserve the comic rhythm of his expansive dialogues, but they also reflect the in-the-moment process of probing raw existence for some guiding arc.

It might seem like anyone could do what Hong does, yet what his movies suggest is that, on some level, they already, inevitably do. In Claire’s Camera, the characters repeatedly mistake each other to be “an artist.” The plot is also fueled by Claire’s polaroids. A far cry from the atmospheric dreamscapes of Tarkovsky’s polaroids, Claire’s very straightforward portraiture nevertheless helps Manhee figure out what has upset her life. At lunch with So and Yanghye, Claire maintains that people are always different after they’ve been photographed. She later offers a variation of this sentiment, which is possibly the closest the low-key Hong has come to offering anything approaching a manifesto: “The only way to change things is by looking at them very slowly.”

This is a more complicated idea than it might initially appear. Hong’s movies serve as documents of this change, showing how a certain analytic observation causes things—in this case, stories—to reconfigure and mutate over time. Making honest films involves the work of honesty, work that can be perilous and thankless because the truth is so rarely forthcoming. So it must be sought with eye or pen or camera; and this, at least, is something you can do anytime you want.