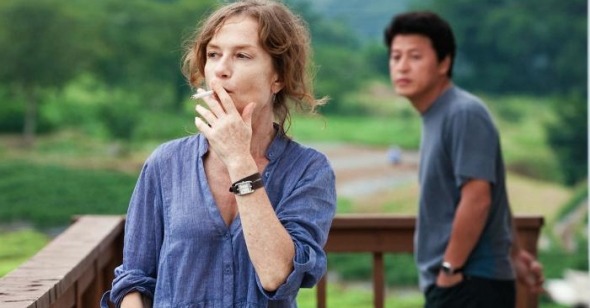 Rain or Shine
by Max Nelson

Near the end of In Another Country, the new film by prolific South Korean mischief-maker Hong Sang-soo, a newly divorced French woman named Anne (Isabelle Huppert) asks a Buddhist monk why she always feels afraid. ‚ÄúBecause you are afraid,‚Äù replies the affable wise man with a smile. Exasperated, she asks for an explanation. ‚ÄúYou want meaning?‚Äù the monk asks? To Anne‚Äôs nod, he extends only an empty hand.

This was probably easier than telling Anne the truth: that she‚Äôs one of three characters dreamt up by a teenage girl (Jung Yumi) to pass the time while her uncle hides from debt collectors in a tiny South Korean seaside town, and that all three are played by the same actress and have parallel interactions with that town‚Äôs eccentric, nonthreatening residents. He definitely couldn‚Äôt have told her that the empty bottle she‚Äôs soon to toss over her shoulder on the beach will be (or maybe already has been) discovered by one of her alter egos in another of those supposedly parallel tales.

That each of Huppert‚Äôs three characters‚Äîshe also plays an effortlessly cool filmmaker and a harried, adulterous businesswoman‚Äîsomehow manages by the film‚Äôs end to make contact with the other two is just one of the many threads tying together In Another Country‚Äôs three stray narratives. Between sections there are repeated lines, phrases, and encounters; recurring visual tics; playful gestures doubled and tripled. One beach is always described as ‚Äúbeautiful but dangerous‚Äù (we never learn why). As these coincidences pile up, they veer from delightful to unsettling. Anne, along with the handful of men and women in her orbit, ends up obliviously going through the motions that by the third and final story we‚Äôve seen twice before.

In films containing multiple diverging variations on the same scenario, we‚Äôve come to expect that each story will have a similar sequence of events, and that the details squeezed in between, the spaces from one dramatic peak to the next, will vary tale-to-tale. Here, those little digressions are what end up getting carried over between stories, and finally being loaded down with vague, conspiratorial significance. The actual sequence of events changes drastically each time: trysts denied in the first part come about in the third; visits made by one Huppert are bypassed entirely by another. Yet in all three stories Anne takes strolls on the beach, asks her goofily accommodating neighbor to point her ‚Äúsomeplace nice,‚Äù seeks out a very small lighthouse, sleeps well into the afternoon, drums on the railing as she walks upstairs, smokes on her host‚Äôs front porch. It‚Äôs scary to imagine that some higher authority has a hold on the smallest, laziest moments of daily life; we‚Äôd almost prefer that fate stick to controlling those discrete failures and fallings-out we tend to blame on it anyway. It‚Äôs still scarier to think that this authority might belong to a god figure as playful and carefree as Hong‚Äîalthough, by encouraging us to share his characters‚Äô perplexity over their pre-written lots, Hong ends up drawing more attention to the implications of his authorial whims than he might initially seem to, or even intend.

In Another Country sometimes comes off as an extended attempt to take on two perspectives at once: that of a handful of characters unaware (at least initially) of their status as figments of an author‚Äôs imagination, and that of the author himself, looking down bemusedly on his creations. For long stretches, Hong does his best to make you forget the presence of the camera, setting up extended takes with so little camera movement and such graceful arrangements that they feel almost accidental. They‚Äôre not, of course, and just when we‚Äôre ready to praise Hong for so effectively hiding his tracks, he‚Äôll throw in a sudden, seemingly gratuitous zoom. It‚Äôs as if he wants us to comfortably inhabit the world before the camera, as his characters do, and then suddenly to be forced to confront the man behind it.

It‚Äôs unclear whether or not the characters themselves grasp the nature of this revelation. Anne‚Äôs three incarnations change the course of each other‚Äôs lives, however slightly, without ever facing one another: there‚Äôs no obvious point where Anne perceives some rupture in what she takes for reality, no moment when she meets her maker. Hong‚Äôs dealing strictly in hypotheticals. He‚Äôs curious what it would feel like for a character to discover the extent to which his or her life is, literally, directed‚Äîto see the world as it‚Äôs always appeared shrink to the size of a screen, and a new world open up far beyond it. Maybe it wouldn‚Äôt look too different from being lost in another country: alone, confused, displaced. Anne, who doesn‚Äôt speak Korean, can‚Äôt have a single conversation without clearing one linguistic hurdle after another, and her physical presence alone (sundressed, freckled, alternately dainty and urbane) sets her apart in the eyes of this sleepy town.

Hong equates language and cultural barriers with other sources of alienation‚Äîfor instance, a character‚Äôs dim awareness of her status as a character‚Äîbut In Another Country isn‚Äôt as weighty as that sounds. In fact, Hong seems happy to keep the stakes low: a jealous outburst comes to nothing, the aftermath of an interrupted dalliance gets little screen time, and that lovesick lifeguard manages to dismiss his rejection with an indifferent ‚Äúwhatever.‚Äù Even the flicker of outrage we might feel at watching a director playing god to a series of characters who can‚Äôt guess at his intentions, and who find themselves bound to his will, seems on reflection a little silly. It‚Äôs only a movie, after all.

It‚Äôs easy to see why Hong would want to avoid having to treat moviemaking, and creativity in general, as a burden or a duty. But that doesn‚Äôt mean he‚Äôs willing to abandon whatever responsibility he might have towards Anne et al: if Hong enjoys inventing constraints for his characters, it‚Äôs only to the extent that they enjoy inhabiting those constraints. Take those language barriers, which in the end keep Hong‚Äôs characters from getting bogged down in any conversation too solemn, or too stifling. They‚Äôre justified in repeating simple English words and phrases over and over, if it pleases them, or even just lapsing into wordless charades. One exchange between Anne and the earnest, clueless lifeguard who loves her devolves into an unsuccessful attempt on the part of both to imitate the movement of a lighthouse beam. Even alone, Anne punctuates most silences by humming, or imitating the bleating of the local goats.

Here and elsewhere Hong‚Äôs peculiar demands‚Äîall those convergences and repetitions likely to perplex, alienate, and even sap Anne of her will‚Äîend up working in her favor. In Another Country‚Äôs final shot has Anne wandering down a country road as it starts to drizzle and matter-of-factly grabbing an umbrella from where her last incarnation had stashed it. She might be on shaky ground socially, culturally, and even metaphysically, but the only thing really threatening her happiness is the promise of bad weather. Good thing Hong remembered that umbrella.