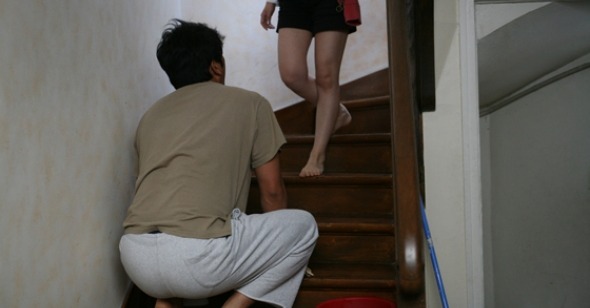 Hong Sang-soo‚Äôs latest, Night and Day, opens by misdirecting its audience with a credit sequence scored to the allegretto movement of Beethoven‚Äôs Symphony No. 7 (a classical favorite usually employed more obviously in movie trailers, as in The Fall earlier this year). It‚Äôs an ominously building epic the exact opposite in tone and thrust to Hong‚Äôs quiet, anti-momentum approach to cinema, but that the director returns to No. 7 throughout Night and Day clues us into the surging importance he attaches to what at first glance appears to be the rather ordinary tale of Sung-nam (Yeong-ho Kim), a struggling middle-aged painter who escapes his dead-end life in Korea for a new one in Paris. Sung-nam‚Äôs on the lam for pot possession, but any hopes the City of Lights will be a relaxing safe haven are instantly put to rest in the film‚Äôs first exchange, in which a Frenchman threateningly stares at Sung-nam after bumming a cigarette and warns him to be careful. Of what, he‚Äôs never told.

Night and Day is replete with such disorienting, awkward moments, the art of which Hong Sang-soo certainly seems to have mastered. There‚Äôs a great scene, for instance, where Sung-nam challenges the same North Korean he had insulted previously to a questionably friendly arm wrestling match. In this case, disorientation and awkwardness stem directly, but subtly, from the distraught manhood of the lead character. Like the male protagonists of Woman Is the Future of Man and Woman on the Beach, Sung-nam embodies Hong Sang-soo‚Äôs concept of male vanity, ineptness, hypocrisy, and dormant maturity. Having left behind in Korea a wife to whom he genuinely cries over the phone, Sung-nam seems to want to start anew in a strange country where he can‚Äôt speak the language, but his attempts to act accordingly are often conniving half-measures. He runs into Min-sun (Kim Yu-jin), an old girlfriend now unhappily wed to a Frenchman, and completely misrecognizes her, is confronted with her admission to have had no less than six abortions while they were together, and then, after some drunken flirting (another Hong Sang-soo specialty), fails to follow through on a tryst by pompously quoting the bible, a book with which he‚Äôs only started to become familiar (earlier he says he reads it out of mere curiosity, as if it were history). But Sung-nam doesn‚Äôt resist temptation because it‚Äôs the right thing to do, he resists temptation, so he explains, because it‚Äôs ‚Äúpractical.‚Äù

Sung-nam‚Äôs motives aren‚Äôt bad, they‚Äôre just confused. Once Min-sun is abandoned, Sung-nam befriends two art students, Hyun-joo (Seo Min-jung) and Yu-jeong (Park Eunhye). Sung-nam falls in love with the latter, inciting a triangle of jealousy and hesitatingly approached courtship that comes to a head during a trip to the beach, the location where the director has so beautifully in the past set his collisions of ego. The older man‚Äôs game plan is to tiptoe around expressing his affection until he eventually insults the younger woman in a strange outburst that actually leads to romance. But the affair is short lived. As a sign of the dishonesty to come, Sung-nam discovers Yu-jeong to be a phony (her sketches that so impress him are all plagiarized), and soon Sung-nam is lying to her about the pregnancy of his wife (he invents an ailing mother) that is forcing him to return to Korea. Yu-jeong herself, meanwhile, might very well be pregnant, resulting from an impulsive decision on Sung-nam‚Äôs part to not use a condom because he was too embarrassed to buy one at the store. Feigned pride and honest lust‚Äîthe filmmaker‚Äôs male characters in a nutshell.

Hong Sang-soo‚Äôs writing is superb at breaking time and events down into a haphazard calendar of episodes that build on each other rather than leading into a one-way street of linear, simplistic answers. In this sense, his attitude toward his characters is difficult to discern. Gratuitous and ambiguous details accumulate symbolic weight in Night and Day so that their function can be interpreted either as wry commentary‚Äîfor instance, a shot of a puddle floating down the side of a street and picking up dog shit while on its course mocks a later shot of Sung-nam gently launching a paper boat on a street puddle‚Äîor else the outward manifestation of the characters‚Äô psychological and spiritual mysteries. The second possibility is portended not just by the Beethoven (in contrast to the light score of Woman on the Beach) but also the way Courbet‚Äôs ‚ÄúThe Origin of the World‚Äù‚Äîthe possibly woman-fearing Sung-nam doesn‚Äôt care for the title and wonders if it makes his female viewing partner feel ashamed‚Äîis evoked in the naked feet of Yu-jeong that stick out from her bed and enrapture Sung-nam, or how Sung-nam‚Äôs initially facetious quoting of the bible is placed in a new light when his church visit is emphasized by one of the director‚Äôs trademark zoom-ins, this time of a stained-glass portrait of a monk surrounded by birds (earlier on Sung-nam unintentionally saves a bird from falling to its death). As if to offset what to Hong Sang-soo is a relatively new heavy visual language, voice-over asides allow us entry into a place few movies venture‚Äîa character‚Äôs most mundane thoughts. Along with Sung-nam‚Äôs pondering of how a beautiful woman is a ‚Äúmiracle from out of ordinary life,‚Äù we‚Äôre as likely to hear him comment to himself about a restaurant‚Äôs expensive but terrible food or else simply say about a passerby, ‚ÄúHer perfume is too strong.‚Äù

What does it all add up to? In Night and Day‚Äôs final scene the director throws a curveball by offering an uncharacteristic dream sequence. As with Bu√±uel, the sequence is all the more startling for looking like everything else Hong Sang-soo has captured‚Äîslow, long take master shots‚Äîexcept for one or two jarring moments, such as Sung-nam knighting yet another new girlfriend by intoning, ‚ÄúIf you‚Äôre understanding you can overcome anything,‚Äù or a pig pushing up against the window of a steam bath. The film ends with Sung-nam‚Äôs wife Han Seong-in (Hwang Soo-jeong) chiding him for chanting some else‚Äôs name in his sleep. Sung-nam, who‚Äôs been tricked back to Korea by his own wife, protests that he loves her. And the truth might be that he‚Äôs right. He does love her, though he still might not know what love is. There‚Äôs an eerie feeling in Night and Day similar to that of Agnes Varda‚Äôs Le Bonheur‚Äîthat human beings can be completely disposable and replaceable to some people, though this doesn‚Äôt necessarily mean these people are unfeeling. Sung-nam paints clouds, and the last shot is a tilt up to a false empyrean above the artist and wife‚Äôs bed. The dream, the painting, and the film‚Äôs title, which refers to the Parisian firmament where night can often be mistaken for day and vice versa: all point in the direction not of Sung-nam‚Äôs guilt for loving more than one woman, but his mixed-up compulsion to do so in order that one person may easily take the place of another‚Äîjust like one sky, real or artificial, can easily substitute for another‚Äîas long as they fulfill his needs. Expanding and enriching his themes with layered motifs and images, filming in a straightforward style that makes the simplest pan or zoom an exclamation mark, Hong Sang-soo has never more disarmingly realized his bleak, sardonic view of male desire than in Night and Day.