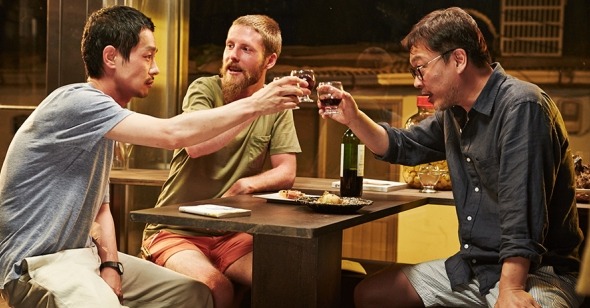 A little ways into Hong Sang-soo’s little new movie Hill of Freedom, the camera does a strange, little thing. Or at least, it’s a strange thing in its prosaism. At an emotionally blustery moment during a café scene in which our Japanese hero, Mori (Ryo Kase, from Kiarostami’s Like Someone in Love), is eating and—mostly—drinking with a recently befriended Korean man, Sang-won (Kim Eui-sung), and an American hipster acquaintance, the camera slightly zooms in on the three men. There are multiple examples of this now anachronistic film technique throughout the sixty-six minute movie, but this one calls particular attention to itself because the lens zooms until the image goes soft. The hipster in center frame is now gently out of focus, and the integrity of the original composition has been compromised. And it stays that way for the rest of the conversation.

It’s what everyone, from your corner cinephile to your average moviegoer, would call a mistake. One could narratively explain the lens shift: it occurs at the moment that an increasingly tipsy Mori, frustrated by romantic confusion, blurts out, “I’m stupid!” Thus the zoom functions as a tiny little rupture. Furthermore, we could read the image going perceptibly out of focus as a visual representation of the increasingly inebriated atmosphere of the room. But these are critical justifications more than concrete explanations, and they cover more pressing and perhaps compelling questions that relate more directly to the question of Hong Sang-soo: what are our technical and narrative standards in regards to contemporary art cinema? And just how is it that this charmingly low-key Korean filmmaker has been so consistently, beguilingly, and quietly getting us to question those standards for over a decade?

In filmmaking terms, Hong, who likes to work fast and cheap, has been employing untrendy, undynamic techniques for years: camera pans, tilts, and, of course, zooms that read initially as jarringly functional necessities rather than the kinds of visual flourishes we normally associate with world-renowned auteurs. (I recall seeing Woman Is the Future of Man at the 2002 New York Film Festival and being rather put off by the clunky, “pointless” pans across rooms that appeared to be the only stylistic hallmark of this much-hyped filmmaker.) With his countrymen Bong Joon-ho and Park Chan-wook seemingly trying to out-baroque each other, and comparatively subdued dramatists like Lee Chang-dong and Im Sang-soo packing potent emotional punches in their intricate narratives, Hong’s ascendance in the international film community has always been peculiar and pleasant. His movies are about fraught relationships and breakdowns in communication, but without any histrionics; they often fracture time and chronology, but not in a cloying or self-consciously experimental way. They are so emotionally transparent that they run the risk of being mistaken for simple-minded. And the same goes for their craftsmanship, which reflects a wonderfully unfussy, almost naïve intuitiveness. Hong zooms because it just seems to feel right in the moment, mistakes be damned.

So who are these characters that Hong’s camera—once film, now video, out of financial necessity—so lovingly, awkwardly investigates this time around? In Hill of Freedom (a title so ludicrously sturdy that it’s wobbly) Mori has journeyed from Tokyo to Seoul to see a young woman, Kwon (Seo Young-hwa), but not finding her at home, the desolate, suitcase-rolling young man ends up staying at a guesthouse for tourists and flirting with and maybe falling for the charismatic Youngsun (Moon so-ri), the proprietor of the local Japanese café, the name of which translates to the film’s title. We learn all this from a series of letters Mori has written to Kwon about his experiences that give the film its structure; yet near the beginning, in the film’s framing device, Kwon, who was out of Seoul on a retreat in the mountains, drops the letters, scattering them before picking them up and leaving them in random order. This provides a literal context for Hong’s decision to tell the slight Hill of Freedom out of chronology, an approach that keeps viewers on their toes despite the anodyne nature of the plot. In this way, a pocket portrait of romantic yearning and cross-cultural connections and misconceptions becomes as much a meditation on time and chance. (The contrivance of this narrative motivation for the formalist conceit of the film is clearly something of a wink to the audience; when asked why the trailer for his The Day He Arrives was backwards, Hong said, “Because it’s fun.”)

In another playful move, Mori is often seen reading a book on the nature and philosophy of time. It is one of many topics he discusses on a casual, red wine–besotted date with Youngsun in his characteristically halting yet enthusiastic English—the common language between Mori and all of the Korean characters in the film. The language barrier results in most of Mori’s statements, declamatory or wistful, seeming terribly earnest, whether he’s insisting that “time is not a real thing” or telling Youngsun that her boyfriend is “so insolent.” The dialogue throughout sounds both amusingly emphatic and clipped, the struggle between characters to connect all the more poignant because of their seeming inability to find the right words. In this way, it’s a lot like Hong’s In Another Country, in which Isabelle Huppert plays three different, but equally out-of-water French fishes in a trio of stories set in a seaside town in Buan; the English dialogue spoken by the Korean and French characters had a similar effect there as it does here, revealing these people’s yearning on a fundamental communicative level. At times we can’t even tell whether two characters are arguing or simply enjoying a heated conversation, so direct are they in their speech and manner, such as when Mori takes exception to his middle-aged guesthouse owner’s thoughts on the cultural differences Korean and Japanese people.

Eagerly delivered and robbed of subtlety (in speaking an unmastered second language, we are often unable to be cagey), the dialogue between Mori and Youngsun, or between him and Sang-won, or him and the guesthouse owner, is always transparent. To make up for this, the film surrounding these conversations requires a certain amount of withheld information, which makes the out-of-sequence structure all the more welcome. Even within individual scenes Hong plays amusing games with viewers, deferring basic narrative information so that there’s an eventual payoff: early on, when Mori first meets Youngsun, he tells her, “Your dog is very cute,” but we have not sees the object of his admiration. Finally at the end of the scene, the camera slightly pans over to reveal the tongue-wagging canine who has been perched aside Mori all along, an adorable silent witness to this meet-cute.

That the short length of this camera move (just a few inches to the right) does so much for the scene might go a long way in helping us understand the effectiveness of Hong’s deceptively demure technical approach. These are people inhabiting small spaces, which the camera can only do so much to help them navigate. If we have to pan a little bit right or zoom a smidge closer, then we may have to ignore such distractions as the integrity of the image. Hong’s moves are not the tear-it-down tactics of a New Waver as much as the gentle shrugs of a filmmaker with a lot of time on his hands—but they’re just as much an example of rule flouting. Hong wants to bring us closer, and he’s not scared to make us feel strange, even a bit graceless getting there.