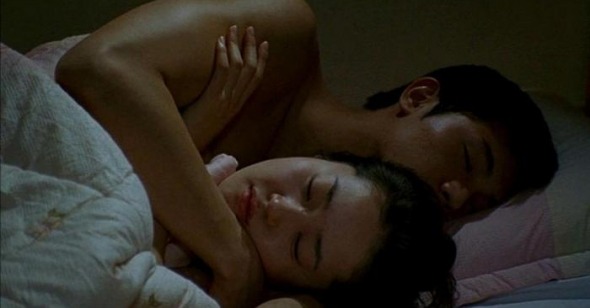 When Hong Sang-soo’s Tale of Cinema begins, I fall under the impression I’m in for another story revolving around aimless youths on a frenzied, if this time strangely dispassionate, quest for connection. Or perhaps, I think to myself, it’s a testament to the ways the metropolis—in this case, Seoul—can crush the wandering and wondering drifter with the weight of its overwhelming indifference, the unkept promise held by those bright city lights. Then again, maybe the film plans to investigate an intergenerational rift announcing itself within the confines of the Korean family. Each of these potential paths suggest themselves to me in the first 40 minutes or so of Tale of Cinema, but, grasping at the flimsy threads in hot thematic pursuit, I find myself each time coming up against a wall. The tale is a tease, flirting first with one trajectory and then, growing bored with the implications, quickly skipping to the next, only to discard again, continue on to another. Because of its fickle nature, the tone feels discomfitingly random: distant and loose, as easily ironic as sincere. Is Hong’s intent to imply meaning only to subvert the expected reading? Is the active inclusion of my consciousness into the proceedings a part of his overall project? Am I meant to be this meta-attentive? I’m made acutely sensitive to the fact of how keyed in I am to such thought processes in my attempts to interpret this studied meandering.

Even more disorienting, gestures and phrases appear to exist as empty signposts; the director runs through a checklist enumerating cinematic clichés of the art-house persuasion, glancingly raising an awareness of generic tropes with the most abbreviated of strokes. So when a long shot illustrates leads Sangwon (Ki Woo-lee) and Yongsil (Uhm Ji-won) dwarfed in the frame by the neon-lit buildings surrounding, I jump to the usual conclusion that the following will parse notions of modern loneliness and spiritual isolation; or, when the characters as casually agree to a suicide pact as they would make a date to go out for a drink, I mentally prep myself for a dissection of youthful anomie. The canned iconicity of the visual and verbal stimuli is enough to set off this chain reaction of conjecture. Denied much background on the protagonists, thrown quickly into their hour of need, the spectator observes their actions without becoming emotionally involved with them. And this furthers a hunch that the director wants you to view his work with a clear eye unsullied by sentiment, to perceive his Tale of Cinema as an exercise, a filmic deconstruction rather than a story in which to invest yourself. And it certainly is this, though not in the ways you expect.

Auto-pilot responses are soon brilliantly thwarted, as Hong plunges us into an entirely different schema that necessitates dramatic re-acclimation. Assumptions and speculations made thus far get the rug pulled out from under them in an instant via a cut so fluid you have to consciously conjure what came immediately before in order to make sense of it. After an argument with his parents, Sangwon rushes up to the rooftop and looks around as he considers whether to jump. In voiceover, he declares, “Nobody cared.” Suddenly, we find ourselves in a lobby as a crowd files out of a movie theater. A poster featuring Sangwon bears the title “Yi Hyongsu Retrospective,” and we slowly awaken to the fact that we’ve been watching a film-within-a-film. As our focus comes to rest on a man named Tongsu (Kim Sang-kyung), we realize that he will be our true protagonist, and that the actress, Yongsil (marking the confusion between “real life” and “illusion,” she used her “real” name in that feature), will also play a part.

Rather than coming to rest on a stable storyline as one might expect him to do after such a sudden reversal, Hong instead continues to tantalize in a similarly provocative and perplexing vein. Rhyming passages abound in this bizarro inverse of the first half, as Tongsu attempts to re-create movie scenarios with a reluctant Yongsil as his partner. In an eye-catching visual differentiation, the latter now wears a magenta-colored scarf rather than the characteristic white one with which she becomes associated in the fictional text. Other events likewise take on an alternate cast, as Tongsu’s efforts to mimic moments of perceived romanticism inevitably end awkwardly, and perhaps say something about the fallacy of cinematic representations of alienation when compared to flatly non-poetic real-life counterparts. “You’re hurting me,” Yongsil cried to Sangwon when he clutched her breast too roughly during a desperate attempt at sex, but when Tongsu reiterates the phrase during a twinned tryst, it carries more humorous implications about her drunkenness than it does encapsulate a frantic lunge for feeling. Each narrative strand intriguingly informs the other, and the skewed symmetry of the two halves encourage abstract thinking over the refining of a particular message; the resultant echoes from such an overlapping of layers animates Tale of Cinema’s interplay between celluloid dreams and reality, rife with observations about cinema’s capacity to commune in intricate and variegated ways with individual and collective psyches.

What also emerges is a portrait of a socially awkward and slightly unbalanced cinephile whose obsession drives him to creepy behavior. Believing himself the originator of Yi Hyongsu’s movie—they went to film school together—Tongsu bitterly clings to a sense of wounded injustice. Focalized through him, we therefore find ourselves in something of an “unreliable narrator” situation, which prompts more questions. Did we witness Yi Hyongsu’s empirical version of the movie or Tongsu’s mental interpretation? Or did we, in fact, see it as Tongsu would have directed it? Were we privy to the entire enunciation or only a portion of it? Such reflections, in turn, give way to broader musings: Did Hong cut away from the embedded piece at an arbitrary point? What does it mean that he chose to shoot both the “fictional” and “real” segments in near-identical styles, replete with conspicuous zooms and without any marked differences to distinguish his own film from that of Yi Hyongsu’s?

This slippery playfulness keeps us constantly shifting. Fittingly, Tale of Cinema is not so much a cohesive fable as a meditation on the nature of viewing and perception in relation to the filmic experience itself. Near the end of their time together, the actress says to Tongsu, “I don’t think you really understood the film.” The statement perfectly emblematizes the highly personal and subjective relationship one has with the movies.