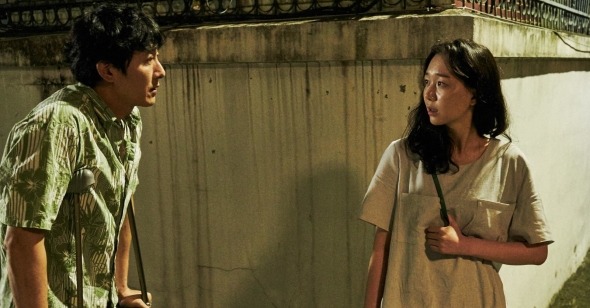 Yourself and Yours
Dir. Hong Sang-soo, Korea, Cinema Guild

A common observation about Hong Sang-soo’s films is that they are all the same. Certainly they have unmistakable elements in common: gaffe-prone characters (many of whom are film directors), fumbled romantic overtures, nondescript city streets, a frequent use of zooms, and endless bottles of soju. Hong seems nothing if not aware of this already; in Yourself and Yours, his eighteenth feature, there is an added element of self-referentiality, where the excessive drinking of Min-jung (Lee You-young) becomes the topic of an argument with her boyfriend Young-soo (Kim Joo-hyuk). It is possible to see the entirety of Hong’s films as variations on a theme, with a limited ensemble of actors working through a set of recurring scenarios, often within the same film. In this way, Hong Sang-soo is similar to Ozu, who, as David Bordwell has argued, organized his films as a “garden of forking paths,” an interrelated set of narrative possibilities. Each film could be seen as one itinerary, with the entire body of work an attempt to convey all possible combinations.

The paths through Hong’s garden are less a matter of design than of chance. Those familiar with his films will note various types of repetition: when events partially recur (The Day He Arrives; Right Now, Wrong Then); when characters’ stories intersect (The Power of Kangwon Province, Hahaha, Oki’s Movie); or when actors play multiple characters (In Another Country, and now Yourself and Yours). These recurrences, however, do not add up to any kind of moral revelation, as they do in Groundhog Day. In Hong’s universe, sometimes things go right, but more often they go terribly wrong. Even if his characters have, on some level, the cognizance to learn from their past mistakes, they were probably too blind-drunk to remember what happened, much less act on them. As an older, supposedly wiser professor admits in Oki’s Movie: “Of all the things that I do, there’s none that I know the reason for.”

Yet something has surely been developing, especially with Hong’s shift to the perspective of his female characters, beginning in 2010 with Oki’s Movie. His women, it turns out, are no less awkward or misguided than his men. “You think women are different but we’re all the same,” chastises one of Young-soo’s female friends, adding, for emphasis, “Drink up, you pathetic men.” With last year’s Right Now, Wrong Then, Hong’s most accomplished, tightly conceptualized, and deeply felt film to date, there is a sense that Hong’s outlook had warmed considerably. This has carried over into Yourself and Yours. For all his characters’ many flaws (their vanity and perpetual dissatisfaction, their ambition or lack thereof, their indecisiveness, their compulsive self-sabotage), not to mention the haphazardness of their circumstances, Hong’s men and women are increasingly finding their way to moments of happiness, even if only fleeting or dreamed.

In Yourself and Yours, the promise of acceptance is especially weighty because Min-jung and Young-soo spend so much time without it. Early in the film, Young-soo confronts Min-jung about a rumor that she was spotted drinking with other men at a local bar. She denies it, and, further incensed, he badgers her for lying about the incident, and for breaking her promise to drink more moderately. (In Hong’s films, people don’t quit, they just drink less.) Weary and sad, Min-jung leaves Young-soo, and the film alternates between the two after their split. Young-soo is immediately besieged by regrets, and he imagines in several scenes that Min-jung welcomes him back, only to discover, in an abrupt cut, that he is back where he started, and still alone. With this simple, devastating effect, Hong captures the pain and confusion that comes in the aftermath of a breakup: the relief that comes from a fantasy of resolution, and the crushing sensation of waking up to reality.

What becomes of Min-jung is less certain. In two café scenes, we see her approached by different men, each of whom recognizes her as Min-jung. She, however, looks baffled; they must be mistaking her for the wrong person. The film does not confirm or deny this. It’s equally possible that Min-jung is all of these women, or none of them. This ambiguity is thematic as well: if she has become elusive, it is because she was already misunderstood by the person who was supposed to know her best.

Yourself and Yours is like a hall of mirrors, where likenesses are cast in multiple and often dissembling ways. Misrecognition is the root of Min-jung and Young-soo’s problems, a source of comedic misadventure, and, just maybe, a chance for the couple to start over. Hong has entertained the notion of reincarnation before, in Turning Gate, and here the possibility is obliquely suggested in the imminent passing of Young-soo’s mother, who, we’re told, has only days to live. Young-soo and Min-jung may be reborn in some senses, but they also remain scarred by the past. Both, for reasons left unexplained, have suffered visible injuries to their left legs, Young-soo with a bandaged foot and crutches, and Min-jung with a large bruise on her shin, as if their emotional wounds had taken physical form. (The damage piles on when we see an incidental character, a woman who has stepped outside to smoke a cigarette, wearing an eyepatch that no one accounts for.)

Yourself and Yours leaves other things mysterious, too. The camera often pans away from Young-soo’s wailing or Min-jung’s wavering to observe the world around them. Sometimes these movements are motivated by what the characters see: when Young-soo and a friend go to Min-jung’s home in search of her, they take a prolonged moment to study the electrical box outside the door. When “Min-jung” prepares to break up with one of her suitors in a park, the scene begins with an unmotivated shot of a few scattered pigeons on a stretch of concrete. Other times, the camera seems to possess its own will, as when, after Young-soo makes another failed attempt to find Min-jung, it follows him briefly only to cut away to a shopkeeper carefully removing the arms from a storefront mannequin. The history of cinema is replete with such small departures, from the many empty rooms left by Ozu’s characters, the long, generous take of an aerosol can rolling down the street in Kiarostami’s Close-up, to the opening shot of Apichatpong Weerasethakul’s Syndromes and a Century, where the camera breaks away from the two people it has been following to push out an open window. In Hong’s films these moments remind us of the richness of the world that goes mostly unnoticed by the neurotic individuals who pass through it. (A particular favorite, from Night and Day, is a gently floating dog turd that’s washed into a Paris sewer grate.) They are especially prominent in Yourself and Yours, perhaps because the characters’ self-absorption is directly challenged. If there’s any hope for them, Min-jung, and especially Young-soo, must find a way to look past themselves before they can truly see each other. As Min-jung tells one of her dates who can’t stop grilling her about her identity, “Don’t try to know everything.” He momentarily frowns, then relaxes. “This is mysterious and fun,” he says, breaking out into a wide grin.

Sidney Lumet once said of Prince of the City that its hero Danny Ciello “created the situation, and the situation stripped him down to his essence.” Such a remark describes Young-soo well: though in the moment he blames Min-jung for leaving, it was his accusations that drove her away, as he later realizes. His remorse and booze-fueled railing about the worthlessness of life (all “shitting and eating”) save for love, are startling in their clarity. He’s broken down and tearful, but steadfastly dedicated to overcoming his clumsy self so that he might be able to say to Min-jung, when—or if, since we’re never fully certain whom he’s talking to—they meet again: “Tell me everything about you.”