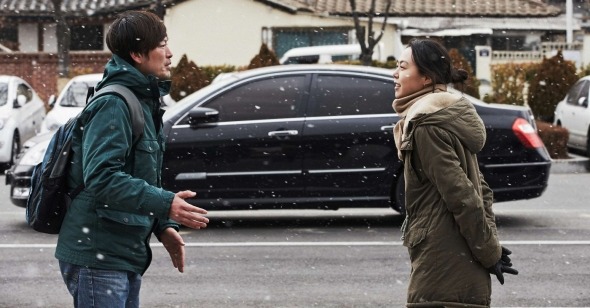 Know It All
By Adam Nayman

“Write what you know,” chide authors workshop lecturers, down through the ages. And so humble Hong Sang-soo includes a scene in Right Now, Wrong Then in which a South Korean filmmaker is subjected (and that’s definitely the word) to an onstage interview following a campus screening of his latest, putatively art-house opus—which is crucially unseen by us. As the writer-director of seventeen feature films in nineteen years (a Fassbinderian pace), whose work has been screened on multiple continents in the context of film festivals, Hong surely recognizes the ritual nature/torture of the filmmaker Q&A. The one that unfolds here is a doozy: when gently implored to unpack his work, upper-middlebrow auteur Ham Cheon-soo (Jeong Jae-yeong) briefly fumbles for words before blathering acidly and embarrassing himself in front of the tiny, student-age audience.

It’s a sequence that has the ring of documentary truth, and importantly, Hong places it pretty much at the midway point of a film that is cleanly cleaved in two. On a first viewing, Cheon-soo’s outburst seems like just one more amusingly awkward episode in a film, and a filmmaking career, chock full of just such precisely serrated slices of life; as we’ve already seen the filmmaker behave like a self-absorbed asshole in his interactions with winsome local painter Yoon Hee-jeong (Kim Min-hee), it’s hardly surprising to see and hear him insert his foot in his mouth. But the fact that Right Now, Wrong Then chooses the aftermath of this moment to press the reset button and become “GroundHong Day”—a twice-told tale in which our hero gets a second chance to meet and possibly seduce the beautiful woman who rightly spurns him at the end of Act One—suggests that Hong is saying something about what happens when artists try to over-explain themselves: namely, that things can go only go up from there.

It’s pointless to speculate about whether Cheon-soo is a self-portrait of the director: Hong always works closely enough to his own social, professional, and (it’s been implied) personal experiences that some sort of autobiographical component can be safely assumed and then filed away under the helpful heading of “who cares?” Hong writes what he knows, but he also finds a way to filter and refine these intimate aspects so that they signify outward without losing their specificity—a nifty trick attempted by precious few directors in an era of meaning-mongering and achieved by an even smaller cohort, of which our hero Hong must be something like a charter member. In last year’s lovely Hill of Freedom, he used two contemporary art-cinema commonplaces—shifting time frames and a transnational dramaturgy—to address a half-century of Japanese-Korean relations, and without ever straying from his vacationing characters and their silly, soju-soaked flirtations. The jumbled-love-letters conceit that gave the film its achronological structure was at once a gimmick and a graceful commentary on the non-fixity of memories; in merely 65 minutes, Hong does more with (seemingly) less than any filmmaker you can name.

Right Now, Wrong Then is nearly twice as long as Hill of Freedom and much easier to follow though it’s equally complex. In the first half, Cheon-soo picks up Hee-jeong and hovers over her like a shroud for the majority of a chilly winter’s day: he shadows her back to her apartment, where he offers some condescending (if wholly solicited) advice about her painting; takes her to a bar, where they both get drunk and amorous; and then gets happily dragged to a gathering of friends where Hee-jeong is suddenly alerted to his basically (self)-hateful nature and bails. As a self-contained short film, this is all very funny, very rueful, and very believable: the older man trying to simultaneously praise and control a younger woman who is aware of yet hesitant about the power she exudes in this scenario. The excellence of the actors’ work here reveals itself in the clarity we have about their characters’ respective and self-conscious role-playing: Cheon-soo the self-deprecating but arrogant artiste; Hee-jeong the hopeful and vulnerable initiate. The speed with which they move to fill these roles is mobilized satirically by the script, but it’s also sad—even if we wouldn’t root for them to hook up in light of the larger truths about their dynamic, it seems unfortunate that their meeting should yield nothing but mutual disappointment.

This is where Act Two comes in, and not a moment too soon. There are a number of beautifully deployed mirroring devices in Right Now, Wrong Then, and one is that Cheon-soo’s description of Hee-jeong’s painting is repeated three times in the first section: first from him to her; then back to him via her friends, which is how she’s tipped off to his intellectual laziness; and then finally in the Q&A, at which point they have the sound of a punchline. Of all the spot-the-difference dissonances between Act One and Act Two—or Film One and Film Two, as it’s never clear whether we’re watching a diptych or a single, self-contained work—the biggest may be that when Cheon-soo 2.0 talks about art he leaves himself (and his own) out of the equation. In Cinema Scope, Roger Koza points out that his discussion of Hee-jeong’s painting in the second section of Right Now, Wrong Then is more critical even though the artist herself seems more confident during the exchange. One way to read this is that Cheon-soo is less pandering and predatory than his counterpart; he’s not trying to butter up his hostess, who in turn takes the cue to stick up for herself. Another possibility is that here Cheon-soo also more confident—that instead of using somebody else’s work as a canvas for his own self-projection, he’s willing to engage with it on its own terms.

In either case, we might say that this version of the character is more honest than the one who came before, and in turn, what was bitterly comic in the first section of the film gets reconfigured as ineffably tender. This time, Cheon-soo’s attachment to Hee-jeong seems less leering even though he tries in much the same way to pick her up—at one point, when they’re both hammered, he confesses that even though he’s married, he’s fallen in love with her, and that he’s suddenly heartsick as a result. Just another horndog Hong husband, perhaps, and yet this admission, which comes lubricated in boozy tears, may just choke up those viewers who can recognize the familiarity and basic humanity of this paradox—and how Cheon-soo’s over-sharing in this situation is its own form of restraint. Similarly, when he embarrasses himself in front of Hee-jeong’s previously admiring film-buff pals—stripping off his clothes at the table while she’s passed out in the other room—the abject humiliation is softened by the visual metaphor of self-revelation (he’s exposing himself literally and figuratively) and the way that he bundles back up against the cold when he walks her home afterwards, a passage that’s tellingly extended in the second part even if it ultimately has the same net result of a chaste nighttime parting.

Hong returns to the Q&A at the film’s end, and the fact that it seems to go well this time—we see far less of it, and nobody loses his or her temper—is the best Right Now, Wrong Then can do for a happy ending. Not even this sweetly serene redux sees fit to contrive a rom-com consummation. But what’s finally so satisfying—and in its own way, romantic—about the film is the feeling it leaves that two regularly and relatably lonely people have given and taken something valuable to and from each other. It’s not a put-down to say that the film feels a bit like a variation on Before Sunrise where a Meet Cute doesn’t yield the love of a lifetime, or even a one-night stand. Rather, it unfolds the sort of incongruously emotionally intense experience that lingers even after the return to the everyday. This is the director writing something that probably everybody knows, even if they don’t totally know it yet. And that’s because as ever, Hong knows best—in fact, to borrow the title of one of his other wise and wonderful works, it’s Like He Knows It All.