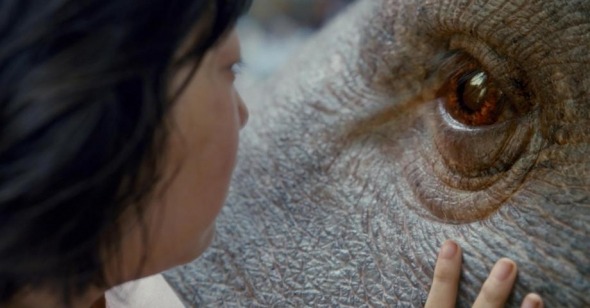 About 30 minutes into Bong Joon-ho’s Okja, the Korean filmmaker kicks the movie into gear and gives us one of his signature set pieces. A genetically engineered “superpig,” raised by a young girl (Mija, played by Ahn Seo-Hyun) and her grandfather in rural South Korea has been reclaimed by the corporation that created it. The titular beast, about the size of shuttle bus, is dragged off to Seoul, with Mija sprinting right behind the captors. Arriving in the capital, she tracks down her buddy and turns pint-sized Jason Bourne, leaping off buildings and hanging off trucks—only to have her caper interrupted by another rescue mission, the black-masked eco-group the Animal Liberation Front. The madcap sequence involves crashing semis, car-choked tunnels, an underground mall, and a spray of superpig dung. John Denver even comes on the soundtrack at some point.

The exhilarating sequence recalls an earlier one in Bong’s career, the monster’s rampage along the banks of the Han River in The Host. The movie—and the show-stopping set piece—suggested to the world the arrival of a new Spielberg. With another fantastical beast at its center, Okja reverses the premise—if The Host was about a monster that preyed on a terrified city, Okja casts the creature as civilization’s victim. Follow the chain of terror and suffering in both movies and you find the same monster-movie culprits: scientific hubris, man’s indifference to nature, the corporate imperative. Refracted through Bong’s mordant prism, these familiar scenarios emerge as fleet-footed, socially conscious updates of a hoary genre.

One of the great showmen working in movies today, Bong seems poised for a stateside breakthrough—if 2013’s Snowpiercer didn’t already count as one. Okja marks his second consecutive film with an international cast, featuring Tilda Swinton (also in Snowpiercer), Jake Gyllenhaal, Paul Dano, and Giancarlo Esposito, among others. Released on Netflix and in a few theaters at the same time, the movie will likely be his most seen in the U.S., thanks to the easy access and viewer-friendly premise. Quibble with the distribution all you want—and many at Cannes did—but a virtuoso with an instinctive grasp of movies as a popular art should be accessible to as many people as possible.

Okja may be the gentlest of Bong’s features I’ve seen (his debut, Barking Dogs Never Bite, is still on my watchlist). The movie opens with panache. A dilapidated factory in New York has been recast as a soundstage, where Lucy Mirando (Tilda Swinton), new CEO of Mirando Corp., announces to the world her company’s newest project: the development of a “superpig” that will emit less, consume less, produce more meat, and taste better than any animal you can sink your teeth into. Mirando will give superpiglets to 26 local farmers around the world, all of which will compete to create the best superpig in ten years. The glitzy talk is a tour de force of brisk world-building, not to mention a withering send-up of Jobs-esque bombast and slick corporate social responsibility—all of this before the opening credits are even done rolling.

Cut to South Korea, ten years later—“Far from New York,” a title card informs us. Okja and Mija frolic in an edenic landscape, jumping in ponds, foraging for fruits. It’s a lovely vision that Bong lingers on—the better to leave an imprint when the traumatizing climax arrives. When the two return to their hut, Mija’s grandfather says the Mirando liaison who’s been checking in on Okja all these years is coming for a visit. Mija wonders why—haven’t they bought Okja outright? Grandpa ignores the question. When the Mirando crew arrives the next day, Grandpa takes Mija for a stroll and reveals that Okja has to go to New York per his agreement with Mirando. By the time she gets back to their hut, Okja’s gone.

That betrayal kicks off the film’s Babe-meets-King Kong plot. In Seoul, amidst that tour de force chase, the Animal Liberation Front’s leader (Dano) tells Mija that they want to rescue Okja—but they first want to use the creature to infiltrate Mirando’s factory farm in America. The ALF flees the scene, but not before planting a camera in the folds of the creature’s ear. Just as they planned, Okja is recaptured and sent back to New York. Meanwhile, footage of the spunky Mija being manhandled by Mirando goons amid the wild chase goes viral. The company goes into crisis-management mode: why not bring her over to America as an honored guest, to be reunited with her prize-winning pet at Mirando’s Big Apple superpig event?

That obsession with branding and public perception is a recurring theme, and a hallmark of Lucy’s rule. Swinton plays her as a brittle, porcelain TED talker, mouthing buzzwords—“eco-friendly,” “natural,” “local”—that mask the actual conditions Okja and her fellow superpigs suffer in Mirando’s facilities. Never too far from Lucy’s thoughts is her sister Nancy (also played by Swinton), who was once the head of the company. Late in the film, Nancy returns to the scene and deposes Lucy, who has been ruined by the ALF’s exposé of Mirando’s ugly factory-farming methods. The no-nonsense sister imposes her own philosophy: never mind the happy talk of Lucy’s regime—let’s pump out some meat. Won’t the consumers be dismayed? She brushes it off: “If it’s cheap, they’ll eat it.” Lucy may be Whole Foods, Nancy may be Walmart, but they’re still kin.

Okja’s broad-brush progressivism will be familiar to viewers who’ve seen Bong’s other movies. Climate change, pollution, genetically modified foods, imperialism, militarism, and corporate greed are among the issues he’s tackled. (He doesn’t smuggle politics into his movies: he carries them openly.) In the case of Okja, the skewering of greenwashing gives way to something graver. The film’s climactic passage takes place in the slaughterhouse where the superpigs are killed, cut up, and packaged. The shift to graphic muckraking is jarring, especially within the context of a hasty and sloppy resolution, complete with a cartoonish depiction of gold-lust. Fearless when it comes to tonal shifts, Bong thinks nothing of switching from pathos to slapstick within seconds. He doesn’t quite nail it in his narrative’s denouement, though a final grace note, a choral dirge by a farm full of doomed superpigs, does reverberate.

If Okja’s American section is the weaker half of the film, it may be because Bong’s audacity gets the better of him. Okja herself becomes a metaphor for the film—big, smart, gentle-souled, and occasionally out of control. Performances have always been high-wire acts in Bong’s movies, and this one’s no different. With his weakness for the bug-eyed and the baroque, Bong gives his actors a little too much rope. Jake Gyllenhaal all but hangs himself; his Johnny Wilcox, an animal-show-host-turned-Mirando-spokesman, is a spluttering fool played for laughs but earning few. Swinton fares better, as does Dano as the fervid eco hero (the madness of true belief burns in those eyes). The rest are fine; the computer-generated superpig fares best.

The creature really is a marvel. Compare The Host’s monster—stunning at the time—with Okja and you can see a quantum leap in computerized imagemaking. Bong has always been an expert at subordinating the gee-whiz to the needs of his story and remains so here. When Okja works, it evokes a sense of genuine wonder. For all its brilliant mayhem, the movie’s bookending idylls may well be what endure in memory. Images of a paradise cut off from the world, they offer a vision of something close to earthly contentment—just a kid and her friend, playing around in a lush jungle, away from everyone else and very far from New York.