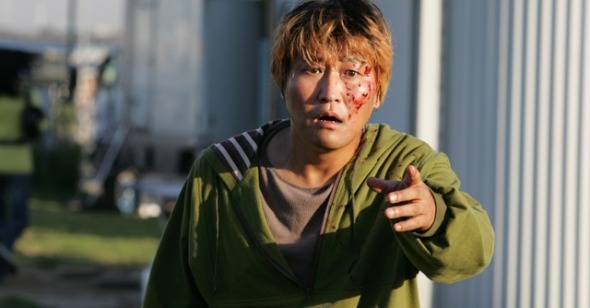 ...With the Most
by Adam Nayman

Reverse Shot offers its writers a comfy venue for dissent, but be warned: if you‚Äôre trolling for a takedown of The Host, you won‚Äôt find it here. Sometimes it‚Äôs good to be part of the mob, and so I‚Äôm pleased‚ÄĒrather than pained‚ÄĒto say that I like Korean director Bong Joon-Ho‚Äôs marvelous monster movie about as much as everyone else. Which is to say: a whole lot and without reservation.

In the waning days of the Toronto International Film Festival, it was rare for an afternoon to pass without somebody‚ÄĒa colleague, a volunteer, a stranger in line for popcorn‚ÄĒinquiring about the film, programmed in this neck of the woods as a ‚ÄúMidnight Madness‚ÄĚ selection. Generally, the Midnight Madness films in Toronto are a greasy-mixed bag of winking splatter-fests and serious-minded sado-porn: films that are fun to read about and taxing to watch. On one hand, it was nice to have The Host around to elevate the overall level of the programme, but it was also annoying to see so lucid and novel a piece of work ghettoized as something best watched after dark in the company of gore-hounds. This situation was an echo of its fate this past spring at Cannes, where it showed out of competition (ditto Jafar Panahi‚Äôs marvelous Offside, but one galling oversight at a time) the weirdo-Palme slot having been ceded to Richard Kelly‚Äôs Southland Tales.

Having not seen Kelly‚Äôs film, I can‚Äôt say for sure if this was the wrong decision, but I‚Äôve got a 50-foot hunch that it was. Tales of Southland‚Äôs apocalypse-oops zaniness and snotty social satire read more to me like optimistic projections than plausible reportage (or maybe I just really hated Domino). The point is that while The Host surely wouldn‚Äôt have won the Palme (even though it‚Äôs better than The Wind That Shakes the Barley, not to mention Flandres and maybe every other Cannes title I saw this year save Colossal Youth), its inclusion among the competitors would have gone a long way towards legitimizing it in the eyes of those who a) hadn‚Äôt yet seen it and b) weren‚Äôt hard-shelled genre nuts loyal to the cause. It‚Äôs been tough to convince a number of people in my life that this is the film they should run‚ÄĒsprint, actually‚ÄĒto see when it opens locally in the spring.

So, if you‚Äôre reading this and you‚Äôre an a) or a b), I‚Äôll try to get you excited. The Host is everything Steven Spielberg‚Äôs War of the Worlds tried and failed to be: a seamless, rough-intrusion-of-the-fantastic B-movie with a hard and real glint of contemporary relevance and resonance. It‚Äôs an us-vs.-It showdown featuring not one but two terrifying many-headed monsters: a righteously disgusting, bipedal trout-beast that emerges from the Han River in the middle of Seoul; and also the government bureaucracy doing damage control in its wake.

The film begins with a pair of pointed vignettes illustrating the script‚Äôs (by Chul-hyun Kaek, Won-jun Ha and director Bong Joon-Ho) central theme: a small problem, left unattended, grows to unmanageable size. Much has been made of the social allegory here‚ÄĒthe monster is revealed (even before the fact of its appearance) to be a byproduct of U.S. intrusion on Korean soil‚ÄĒa mutation caused by the dumping of gallons of formaldehyde into public reservoirs. At this point, the Yankee bogeyman card is pretty worn out, though, so the scene that follows is concise and charged with intra-cultural criticism: a pair of fisherman spot something small, wriggling and disgusting in the water with them. They marvel at its grotesqueness, wonder at its origin and throw it back, their curiosity replaced by an unwillingness‚ÄĒfamiliar to us all‚ÄĒto make the effort that necessarily follows discovery: gathering the thing up, bringing it to the proper authorities, waiting around, etc.

The fallout of their inaction comes ten minutes of screen time (and four years‚Äô worth of story time) later, as a lazy afternoon by the banks of the Han turns into a wildly dislocating broad-daylight nightmare. In writing about the film, most critics have focused their admiration on the way Bong introduces the monster, and rightly so: first as an unidentified mass hanging from the side of a bridge, then as a dark shape moving through the water towards shore, and finally as a clearly seen but lightning quick monster that‚Äôs quite necessarily a CGI creation but has the weight and tactility of a real animal. In the seconds before it comes ashore, the crowds‚ÄĒunsure as to what they‚Äôre looking at‚ÄĒcheerfully pelt it with garbage. It‚Äôs a slightly heavy-handed visual metaphor‚ÄĒthey‚Äôre literally feeding the beast‚ÄĒbut it‚Äôs also chilling: with apologies to Larry Fessenden‚Äôs Wendigo, ‚Äúthe more it eats, the bigger it gets‚Ä¶the bigger it gets, the hungrier it gets.‚ÄĚ

It's hungry enough to consume or kill pretty much everyone it comes into contact with on land; the one person it doesn‚Äôt eat right away is pretty high schooler Hyeon-seo (Ko A-sung). Instead, he wraps her in his tail and disappears beneath the waves‚ÄĒthe implication being that he‚Äôs saving her for a snack. Her slow-witted father, Gang-du (Song Gang-Ho) blames himself for her abduction‚ÄĒhe lost her in the chaos, accidentally saving the life of another young girl‚ÄĒand as it turns out, so do some of the members of his family: his unemployed intellectual brother Nam-il (Park Hae-il) and his professional-archer sister Nam-ju (Bae Du-na). Their father, Park Heui-bong (Byeon Heui-bong) is less quick to judge‚ÄĒhe dimly recognizes that his brood is united for the first time in memory, even if it‚Äôs in grief.

The foursome will eventually unite against something more tangible‚ÄĒthe monster itself, which they resolve to track down and kill. Gang-du seems to get a call on his cell pone from Hyeon-seo, which recasts their vengeance-themed operation as a rescue mission. But‚ÄĒand here is where The Host really gets cooking‚ÄĒthe family‚Äôs desire to get out after the thing that‚Äôs caused them so much pain runs up against a brick wall of procedure and paranoia. The government has rounded up everyone in the vicinity of the monster‚Äôs attack, claiming that they‚Äôve all been infected with a deadly virus‚ÄĒnobody shows any symptoms, however‚ÄĒand the powers-that-be seem less interested in catching the creature themselves than controlling public response. It‚Äôs a portrait of multi-tiered institutional idiocy that finally tilts over into savage, bitter comedy.

The rest of the film unfolds within a sturdy cross-cutting structure that would have probably worked ninety years ago: our heroes plot to escape captivity while Hyeon-seo‚ÄĒwho is alive, if not particularly well‚ÄĒtries to stay hidden in the monster‚Äôs lair. It‚Äôs honestly a wash as to who has a harder time. Hyeon-seo‚Äôs adversary is formidable, but also dumb (blank-eyed and snuffling, he‚Äôs the sullen antithesis of Jackson‚Äôs too-cute King Kong: no monster-movie Stockholm Syndrome here), while her family is grappling against people who are paid to be professionally inscrutable. Lest this description make the film sound too schematic, it‚Äôs important to point out that the story‚Äôs rhythms are completely sprung. We see the monster again before we expect it; the result of the group‚Äôs initial assault confounds our expectations; the climax seems to happen too early, then gets cut off and rebooted; the final casualty list is longer than one might suspect.

The Host dazzles with its craft‚ÄĒthere‚Äôs a Kings and Queen-ish exhilaration in the way Bong drags conventional scenes (like the memorial service for the monster‚Äôs first victims, including Hyeon-seo) well past the dramatic breaking point but retains our interest through twists of composition or perspective. The near-hysterical pitch of the action stops short of being bludgeoning‚ÄĒcredit here to the principal actors, who evince tangible weariness, soul-sadness and head-drooping fatigue in their scenes together, and a credible wide-eyed terror when they‚Äôre acting opposite a green screen. Bong‚Äôs aesthetic is perhaps best described as unraveling in frenzied fits-and-starts, and thus Song Gang-Ho is an ideal star: he‚Äôs drugged-dumb one moment, all wound up the next. The beaten-down and genuinely damaged Gang-du (it‚Äôs revealed that he may have real mental problems in addition to his being ostracized as a child) is as much a product of his toxic environment as the monster, a similarity driven home by a late shot of him dangling from a sewer grate in a manner identical to the monster hanging from the bridge.

The Host is an environmental horror movie (there were a bunch of those at TIFF this year, also including Jennifer Baichwal‚Äôs excellent documentary Manufactured Landscapes and Larry Fessenden‚Äôs startlingly good The Last Winter, a more abstract variation on the hell-hath-no-fury-like-Mother-Nature-scorned subgenre) that‚Äôs quite literally about the horrors of environment. Bong shoots Seoul like a place unfit for man or monster alike. Not only is its antagonist a living waste product, but its stomping, er, swimming grounds have been rendered untenable by their ostensible stewards‚ÄĒwe‚Äôre never cued to sympathize with its plight, but we recognize that it‚Äôs acting out of instinct (although one remarkable, heart-in-throat set piece towards the end does show it cross the line into pure cruelty). The Host is a great film because its subtext is quite literally sub-text: a large, variably divinable shape moving below the surface. It works as an allegory because it works first and foremost as a genre movie‚ÄĒsomething that I can‚Äôt claim for the rose-colored apocalypse of War of the Worlds or the arm-punching sociology of Land of the Dead. The testament to Bong‚Äôs artistry is that he‚Äôs made a film that‚Äôs impossible to misread and yet doesn‚Äôt seem to be spoon-feeding you. The Host is plangent and accessible, pitched down the middle instead of over our heads, and best of all, terrifically, consistently entertaining in a way that Hollywood (or anywhere else) hasn‚Äôt managed in a while. It‚Äôs a movie that everyone can like, which is why it would be a shame if it were sold, Midnight Madness-like, as a special-interest film upon its release. Bong hasn‚Äôt tried to weed out viewers in making it‚ÄĒyes, it‚Äôs a little stranger than Calendar Girls, but no more demanding or gory than War of the Worlds‚ÄĒso why should it only play to those already predisposed?