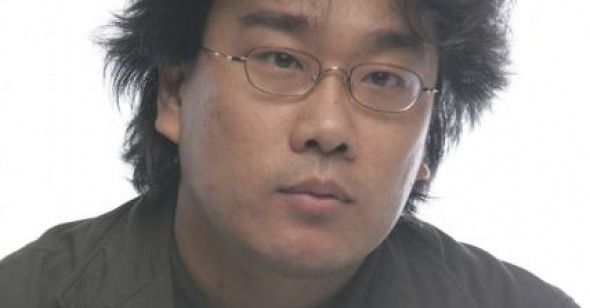 Fish Out of Water:
An Interview with Bong Joon-ho
By Adam Nayman

[This interview was cross-published in the current issue of Cinemascope]

REVERSE SHOT: Is it true that one of the starting points for The Host was when somebody gave you a photograph with the Loch Ness monster juxtaposed against the Han River?

BONG JOON-HO: I think you’ve got the wrong information. The picture was one I juxtaposed myself and showed to the executive producer. I loved Nessie when I was a child, so I cut out the famous photo of Nessie and put it on the picture of the Han River I took, using Photoshop. Without any proper storyline, I used the picture to present the film to the executive producer. He looked at it for ten seconds and without hesitation, he said okay.

RS: The second scene with the fishermen suggests that one of the film’s themes is that a small problem, left unattended, grows to unmanageable size—the monster used to be small, but it was ignored in the early stages of its development.

BJH: Exactly what you said. They could have very easily killed the baby monster inside the cup with their fingers. But they didn’t. In real life, that kind of thing happens a lot. The disaster or terror starts with a trifle.

RS: Another major theme, obviously, is family—the idea of people bringing their different strengths together to protect somebody weaker. This extends even to the first “victim” of the film, Hyun-Seo, who ends up protecting the younger boy even though she is herself in danger…

BJH: That is right. All the family members desperately want to save Hyun-seo, but at the same time, Hyun-seo struggles to protect the weaker boy inside the dark sewer. So it is a relay race of the weak to save one another. While the nation, the government, and the society neglect them, they fight for themselves. That is why they seem more sublime. If you see the film from the point of Se-joo, the weakest being in the film, it becomes more obvious. In the beginning, he was protected by his brother. When he was taken to the monster’s den, then he was protected by Hyun-seo. In the later part (through Hyun-seo’s sacrifice and fight), he meets Gang-du. The film ends when Se-joo eats the hot meal Gang-du prepares for him. While the nation and the system don’t take care of them, the weak come together and save this boy like a relay. This is actually a greater concept than “family.”

RS: Can you talk about the design of the monster? It seems like the opposite of Peter Jackson’s anthropomorphized King Kong—it has no clear personality.

BJH: The design is based on a fish, so it has less personality than King Kong, who is a mammal. But I tried to achieve some humanness through its behavior patterns. It was important to give the impression that the monster is somewhat clumsy—like when it misses its footing or rolls down the slope when it first attacks people. So I wanted it to be clumsy and violent and even hysterical—a character without charisma. Not like Hannibal Lecter, who’s full of charisma in The Silence of the Lambs, but like Steve Buscemi in Fargo. Actually, my creature designer and myself often thought of Steve Buscemi while working on the design. But it also has an unpredictable personality, like when it cruelly kills Hee-bong, or when it puts Hyun-seo down when she tries to escape. I wanted the audience not to be able to expect what the monster would do in the next scene.

RS: One thing you’ve probably been asked about a lot is reversing the Jaws tactic of revealing the monster slowly. It seems like you’re going to do that at first—the shape moving under the water during the suicide right before the opening credits—and then all of a sudden, there it is. Was the idea always to be so upfront?

BJH: There are three reasons. First, I hated the monster film convention or tradition that we have to wait for more than an hour to see just the tip of the monster’s tail. I wanted to break that. Secondly, this film is a sci-fi film, but it has a realistic mood. In real life when we confront the disaster, we are never prepared in advance. The car accident or earthquake happens quite suddenly, when we are not ready. I wanted to convey that to the audience. So I wanted to show the monster thirteen minutes after the film opens, when they are not ready. They see the monster killing people in a broad daylight. Thirdly, the structure of the story demands it. The film doesn’t tell a story focusing only on the monster. But there are chains of events after the appearance of the monster, such as the virus incident, Hyun-Seo’s capture, the family’s trying to save her, and so on. So the monster’s early appearance was a must.

RS: How did shooting around the visual effects affect your filmmaking process?

BJH: My mind and body were wrecked. There was so much to take care of as a director to make the film, and there are no sci-fi or visual effects film traditions in Korea. The Host is a small budget film in the Hollywood standard, but it is a big film in Korea. So from the preproduction on, everything had to be different. I had to control the number of shots with the monster, because the total budget depends on those scenes. As I mentioned above, I planned to have the monster appear from the very beginning of the film. But I had to carefully ponder not only how to control the number of monster scenes, but also how to suggest the existence of the monster in the scenes without it. I studied many visual effects-driven films, and prepared many previsualizations using storyboards. Luckily, those helped me solve many of the problems. For the postproduction, we used four companies in the U.S., Australia, New Zealand, and Korea. It was a very complicated job with a lot of difficulties, but it was exciting, too. Everything was a precious experience.

RS: I’m very interested in the parallels the film draws between Gang-du and the monster. It seems like they are both products of a toxic environment. Can you discuss the ways in which they are doubled in the film, both physically and metaphorically?

BJH: In some sense, Gang-du is the monster for the family. You can tell by how his brother and sister regard him. But there is actually an internal relationship between Gang-du and Se-joo more than between Gang-du and the monster. In the last part of the film, Gang-du looks after Se-joo, but actually, Se-joo is more like Gang-du’s past self. If you look into the dialogues about Seori, you will see what I mean. And I am not sure how well it was conveyed via subtitles, but the way the two speak is the same. It is a very childish way of talking, but there they are same.

RS: Can you talk about the balance between genre elements and realism—particularly with regards to acting—in both Memories of Murder and The Host? Was this blend more difficult to achieve in a “monster movie” than in a “cop movie?”

BJH: In regards to the acting, whether it’s a thriller or a monster film, I try to consider each film as a realistic film. I even thought about making a documentary-like feature starring the creature. Memories of Murder was inspired by the real serial killer case, but The Host has the monster. In this kind of sci-fi film, I wanted to have all the elements except the monster be as real as possible—the time, the place, and the feelings of the characters. I thought that kind of awkward unbalance would make the film exciting.

RS: One scene that strikes me as absolutely crucial to the mechanics of the film is where the family is grieving over Hyun-Seo right after she’s been taken. How do you keep something so over-the-top grounded in real emotions? The bit where the newspaper people close in to photograph their grief feels quite pointed…

BJH: To a Western audience, that scene may seem exaggerated or surreal, but it is very realistic for Koreans. Those kinds of things happen in the real joint memorials after big accidents. In any case, that scene is the most important sequence. It propels the narrative forward. The monster appears in the very beginning, kidnapping Hyun-seo, so there’s not enough time to introduce the families—how they relate to one another, how they live. The introduction and the kidnapping happen almost at the same time. So, all the family characters gather in one place after Hyun-seo is taken. It was necessary to effectively show in this scene that these characters are families with emotional bonds, and they really miss Hyun-seo.

RS: Genre movies have often played host to larger messages, but in The Host , the allegory is particularly strong. Was there a fear that the message would be too obvious?

BJH: Crude yet direct political satire has been the convention of creature films. I don’t usually enjoy that kind of direct satire personally, but this might be the only monster film I am going to make. When can I do such a thing, if not in this film? I want future audiences and critics to learn the direct lesson that the people in my time lived like that, that the monster was just as shown in the film.

RS: It’s been rumored that there will be a remake of The Host . Do you think the story lends itself to a different cultural context? Or is it too specifically Korean?

BJH: Universal Studio bought the remake rights last year. I think there are many universal elements in this film—the monster genre with familial love. So despite a few Korean details and nuances, this film can work universally.

RS: I noticed you at a Toronto International Film Festival screening of Woman on the Beach. Are you close with other South Korean filmmakers? I ask because the country’s cinematic output has gotten a lot of attention recently, but your films strike me as being somewhere between the art-house and the commercial. Is there a sense of a filmmaking “New Wave” in South Korea? Or is that kind of perception really only useful to critics or programmers?

BJH: There’s no official classification of the Korean directors as Korean New Wave, like New German Cinema many years ago. Many Korean directors make various types of films, and just like in any other country, there are groups of close directors. I am personally close to Chan-wook Park, Kim Jee-woon, and Ryoo Seung-wan. I also enjoy drinking with Hong Sang-soo.

BJH: I want to make a unique film about a Korean mother. In any other country, mothers are robust yet unusual. But I think they are really peculiar in Korea, especially. I want to see a strong drama about the unusual relationship of a mother and a son, their obsession. Without any CGI.