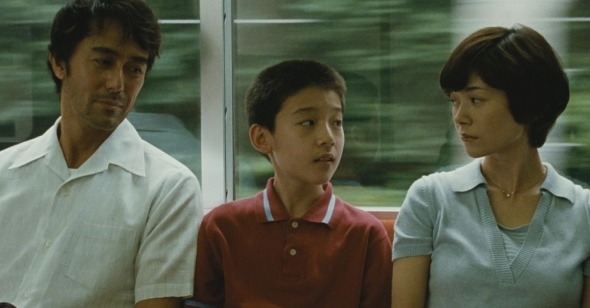 Still Learning
Kelley Dong on After the Storm

Hirokazu Kore-eda’s dedication to the study of family dynamics could easily have gotten old many years ago. What protects him from repeating himself, however, is his sensitivity to the fact that there is no universal meaning of family. Nor is there a universal bond that keeps a family together beyond the limitations of blood, time, and space. Instead, each family—from the nuclear unit to half-siblings (Nobody Knows), stepparents (Still Walking), friends (I Wish), and strangers (Like Father, Like Son)—is defined by its unique circumstances, from the food in the fridge to the divisions of responsibilities. Accepting this as truth, Kore-eda fixes his lens on the little quirks of family life and the development of each family member without the burden of providing an overarching moral lesson.

Kore-eda has explained that his latest film, After the Storm, is an unofficial sequel to his 2008 drama Still Walking. Both films contemplate the fresh wounds left by a deceased family member on the living; the former takes place over the course of a single day, the new film over several weeks. Both follow a main character named Ryota, played by the charming Hiroshi Abe. In After the Storm, Ryota Shinoda is a writer-turned-detective. With no stable income, he struggles to pay the child support needed to continue visiting his son, Shingo (Taiyo Yoshizawa) and his ex-wife, Kyoko (Yoko Maki), while secretly spying on them to make sure they haven’t forgotten about him. The death of Ryota’s deadbeat father also hovers over his life. The event is no tragedy: at one point Ryota’s mother, Yoshiko (Kirin Kiki), refers to his absence as a relief. But to everyone’s dismay, Ryota has inherited his father’s compulsive lying, fluctuating ambitions, and weak spot for gambling; it’s like the old man never left.

Tired of Ryota’s delayed child custody payments, Kyoko threatens to cut him off completely if he cannot provide the funds by the end of the month. In a sweet twist of fate, the big day coincides with the arrival of a typhoon, and the titular storm is so strong that Ryota, Kyoko, and Shingo must spend the night in Yoshiko’s home. Reunited with his wife and son for the first time in years, Ryota finally confronts the consequences of his shortcomings. In a series of two-person conversations, Kyoko, Shingo, and Yoshiko each have their own realizations, and by the next morning, the wind and rain has swept away the remaining debris. The on-the-nose but earnest weather metaphor warmly suggests that just as a typhoon eventually dissipates, so does the pain of coming to terms with reality, and both must be endured for what they are.

After the Storm is less concerned with the gaping hole left by loss than Still Walking and more with the qualities passed down from father to son that bind a family together. These invisible relics are especially significant within the context of the Shinodas, because the family rarely projects any sentimental importance onto physical objects. Before his death, Ryota’s father sold most of Ryota’s possessions to the local pawn shop; Ryota later attempts to sell his father’s possessions for extra cash. Thus, the most tangible memories are those embedded in their everyday lives. All others inevitably disappear, from the frozen treats Yoshiko makes for her now-middle-aged children to the lottery cards Ryota buys for Shingo. Ryota has little to offer Shingo aside from discounted gifts, so their likeness—they share a disinterest in worldly success—is a gift in itself, holding the two together even when apart.

Filmed concurrently with Kore-eda’s Our Little Sister, which was released in the U.S. last year, After the Storm offers a lighthearted balance between hope and pragmatism, returning Kore-eda to the same territory as 2011’s I Wish. A film about children affected by divorce, I Wish asserted that longing for an idealized past or future distracts from the intimate beauty of the everyday. In similar fashion, After the Storm avoids moments of immediate redemption, instead giving each of its characters time to move at their own pace in the present. Kore-eda, who initially began his career as a documentary filmmaker, invests more time into observing his characters’ daily habits—arguing about handwriting, watering plants, fixing windows, and taking many, many walks—than the resolution of their problems. As a partly autobiographical character, Ryota best embodies Kore-eda’s documentarian approach. At the end of each day, he covers his walls in Post-It notes as “research” for his next novel, though the actual manuscript adds up to only a few pages.

Perhaps more than his previous works, After the Storm emphasizes the importance of individual growth. Although Ryota may resemble his father, by the film’s end it becomes increasingly clear that he must assert himself as his own person, while Shingo must accept that Ryota may not be the perfect father. But this takes time. Early on, Yoshiko remarks that like a stew, people need to sit a little while before their flavor sinks in. All is a process in the film, as we watch Ryota, played by Abe with down-to-earth sincerity, strolling from one location to another, on the lifelong, quotidian journey toward becoming the person he wants to be. Subplots about his award-winning first novel and detective cases provide insight into his personality as a voyeur who ironically lacks self-awareness. Though these anecdotes occasionally distract from the main plot of Ryota’s relationship to his family, they help to establish Ryota as more than just a bumbling dad, a lazy husband, or an accident-prone son.

After the Storm’s original title translates to “Even Deeper than the Sea,” referring to the refrain of “Wakare no Yokan” by Teresa Teng, which plays on the radio during the storm. After pausing to listen to the words, Yoshiko asks Ryota if he’d ever loved anyone deeper than the sea. “In my own way,” he responds. The sympathy Kore-eda extends to Ryota resides in the conviction that though the rest of the family may only see his deceased father in him, Ryota’s love for them is entirely his own. The film upholds his constant striving to better his expression of that love as enough reason to cheer him on, because he wishes to try rather than surrender to a cycle of the same old mistakes. In After the Storm and all his films, Kore-eda portrays a world in which each individual, though far from fully realized, is still worthy of belonging.