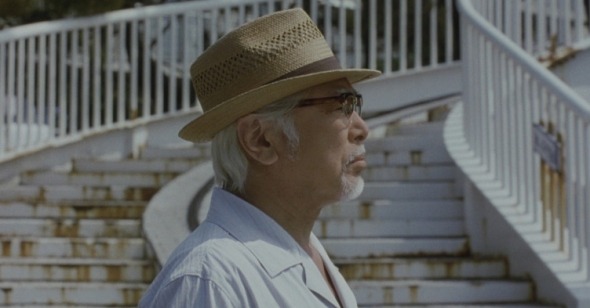 Hirokazu Kore-eda‚Äôs films are haunted by the specter of death‚Äîfrom the exquisite undercurrent of loss infusing Maborosi to the explicitly gimmicky conceptualization of the hereafter in After Life to the looming danger hovering over the abandoned children of Nobody Knows. His latest, Still Walking, again takes up questions of mortality. As the Yokoyama family reconvenes for what we gradually realize is a memorial day commemorating the eldest son‚Äôs death, remaining siblings Ryo (Hiroshi Abe) and Chinami (You) quietly grapple with the aging of their elderly parents.

From the start, small moments gesture toward the transition from one generation to another; mother Toshiko (Kirin Kiki) explains that the sushi at the store down the street isn‚Äôt as fresh since the son took over the business. Father Kyohei (Yoshio Harada), a retired doctor, takes step-grandson, Atsushi (Shohei Tanaka)‚Äîby way of Ryo‚Äôs marriage to widow Yukari (Yui Natsukawa)‚Äîaside to encourage him in the direction of his former profession.

But much like Olivier Assayas‚Äôs gorgeous Summer Hours‚Äîa more direct meditation upon the passing of parents‚ÄîStill Walking rarely feels gloomy; it hums too much with the buzz of life. Characters stream in and out of Kore-eda‚Äôs fixed frames during mealtimes, the family as organism on display. Sounds of cicadas and crickets often suffuse the soundtrack and provide a calming counterpoint to the bustle of activity. And in lovely, unadorned sequences, the director renders the magic present in even mundane moments: At one point, Yukari and Chinami‚Äôs children, often audible in the background even if offscreen, wander away, and the camera trails after them; Kore-eda captures their outstretched hands caressing a pink blossom against a white sky.

But life also entails the tricky negotiation of delicate family dynamics and demands. Ryo is out of work and refuses to tell his father, the latter disdainful of his son‚Äôs refusal to follow in his footsteps and take over the family clinic. Toshiko, on the other hand, notes the downside of her husband‚Äôs revered career; busy tending to other patients, Kyohei missed his own son‚Äôs death. And Ryo continues to harbor feelings of resentment over not being the favored child‚Äîthat fell to his deceased brother‚Äîeven as he attempts to figure out his role as a fairly new stepfather. Meanwhile, Chinami ponders moving her family into her parents‚Äô home in preparation for their old age, meeting Toshiko‚Äôs resistance.

Still Walking introduces a number of threads and builds slowly to something cloudily complex. Issues remain persistent and unaddressed, except in the passive-aggressive fashion of many families. Unlike Kiyoshi Kurosawa‚Äôs also wonderful Tokyo Sonata‚Äîanother Japanese film released this year dealing in family dysfunction‚ÄîStill Walking elucidates the quotidian rather than the dramatic or cathartic in familial interactions. More interested here in group dynamics, Kore-eda rarely singles out a lone character, in contrast to Kurosawa‚Äôs focus on the individual trajectory of each member in a family unit. But the former does visually isolate characters in order to highlight key moments; he heartbreakingly holds Yukari at one point in a rare medium close-up as her smile slowly freezes and then fades away at her mother-in-law‚Äôs suggestion that perhaps she and Ryo shouldn‚Äôt have children of their own.

For every such instance illuminating prickly family politics, though, Still Walking offers a countering scene of hopeful clarity and tenderness. Bonding over Toshiko‚Äôs tradition of battering and frying corn kernels, the family, gathered around the kitchen, laughingly banters and ducks the hot oil flying from the pan. Later, Yukari promises Atsushi that his stepfather will ‚Äúslowly but surely‚Äù become as much a part of him as his biological father, just as Ryo enters the room; all three are held lovingly in Kore-eda‚Äôs intimate frame.
Still Walking is marred only by a seemingly tacked-on concluding voice-over and final sequence too pat and obvious, out of sync with the rest of the understated film; more disappointingly, the sequence follows an unassuming one that would‚Äôve provided a perfectly irresolute and poignant endnote. Fortunately, even an unsatisfying ending can‚Äôt detract from the overall grace of Kore-eda‚Äôs film, which, because of its heightened awareness of death is more lovingly attuned to life‚Äôs fleeting pleasures.