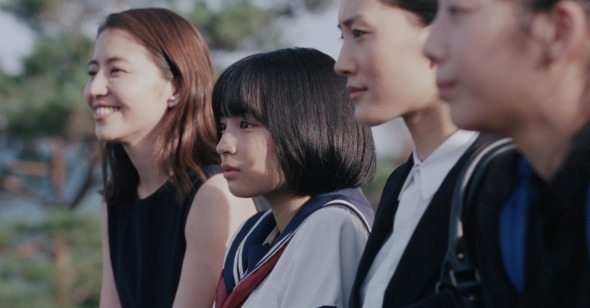 Women in Need
by Vadim Rizov

Hirokazu Kore-eda is most known for his small-scale dramas about children (Nobody Knows, I Wish) and interfamilial friction and reconciliation, as in Still Walking, the offensively innocuous Like Father, Like Son, and now Our Little Sister. (After the Storm, which premiered at this year’s Cannes, is reportedly much in the same vein.) Adjectives like “gentle” and “restrained” are commonly applied; for a skeptic, the pejorative dismissal “nice” may be closer to the mark. Our Little Sister is his most successful work in this idiom, cleansingly soothing in cumulative effect without being too gentle in its treatment of thorny subjects and traumas.

Our Little Sister’s story and characters are adapted from Akimi Yoshida's manga Umimachi Diary, whose narrative of three twentysomething sisters has been substantially condensed, reworked, and embellished; Kore-eda takes some of the source material’s images and framing, but the visual language is mostly his own. First we meet middle sister Yoshino (Masami Nagasawa), introduced in a decidedly not Kore-eda-esque fashion given his largely sexless work: sleeping naked under a blanket in the morning sunlight with a young man. She arrives home to diligent, sometimes sternly hectoring nurse Sachi (Haruka Ayase), the eldest, and the youngest girl, oddball Chika (Kaho). Upon Yoshiko’s return, we’re introduced to Chika in a framing that’s nearly cartoonish (and not taken from the manga): her head popping out from a doorway and resting lazily on the ground, emerging as if from another panel.

We gradually glean that Sachi's severity emerged after she had to take charge when both their mother and father left them. The two other sisters have been living with her in the family house under her guidance; responsibility is both her unavoidable fate and overindulgence of choice. A subplot has her contemplating whether to accept a promotion in her hospital to supervise the terminal care ward. Japan’s population of those 65 or older is a quarter of the country, and the Ministry of Health, Labor, and Welfare has said one million more nurses and care workers will be needed by 2025, so Kore-eda's emphasis on necessary but grueling end-of-life care is similarly topical. (The film's emphasis on hospital work overlaps with Ryusuke Hamaguchi's upcoming release Happy Hour, in which a nurse delivers a spellbinding monologue on the insurance liabilities—such as being found responsible for a patient with dementia wandering off and getting injured—that could destroy her career.)

Cheerful drunk Yoshino is Sachi’s opposite, although how happy she is in her cups is up for debate. “You don’t understand why some of us drink,” she tells Sachi, who snaps back, “I don’t want to.” Yoshino oscillates between booze and a string of inevitably disastrous boyfriends, but seems like the kind of person who thrives on a dose of volatility. Chika is the relatively secretive but modestly content one; the closing stretch revelation of her low-stakes retail job is a good joke, as is, visually, the introduction of her incongruously afro’d semi-DJ boyfriend. The sisters’ coexistence is not without friction, but they orbit securely and definitively around one another.

The death of their father, who long ago left their mother for another woman, necessitates travel to the funeral and meeting their half-sister, Suzu (Suzu Hirose), an alarmingly somber and composed 13-year-old. (As with Chika’s introduction, Suzu’s first appearance, in a schoolgirl outfit, her eyes cartoon-wide and quiet, is incongruous to the film’s naturalism.) Their father's estate is a mess, and—her compulsion to be a caretaker kicking in again—Sachi impulsively invites Suzu to live with the sisters in their big family house. The girl is herself clearly a little shell-shocked by her father’s death, leading up to which she did the bulk of nursing duties. The three sisters want to restore her to the state of childhood, which was abruptly ripped away from her, introducing her to foods they ate growing up and encouraging her to actually express herself. Drunk after accidentally consuming plum wine, a semi-conscious Suzu screams what she’d never say otherwise: that she hates her family for what happened to her. The film’s emotional trajectory is to get her from unconsciously expressed anger to conscious, literal primal scream.

Our Little Sister is thus a movie about long-term processing of emotional trauma, a not particularly uplifting topic. And more successfully than in Kore-eda’s other family dramas, which seem counterproductively hellbent on making sure no one’s feelings get bruised, it attains a balance between pain and comfort. This may be the result of the director honing his skills at the same genre over and over; there have been no thematic outliers in Kore-eda’s work since 2009’s ill-received sentient sex toy comedy Air Doll. The carefully calibrated sisterly dynamics prioritize comedy and joy in the everyday (with a particular emphasis on the fresh seafood delights of Kamakura), in an idiom that’s a little broader than usual.

With its sentimental score, passage of seasons, understated deaths, and aversion to the kind of confrontation that would make viewers truly uncomfortable, this is very much a Kore-eda film, but there’s a steely center: one sister hasn’t gotten completely past her teenage scars and another may never do so, and there’s not much to be done about that. Our Little Sister is deliberately small, but it’s “nice” (in the most charitable sense) because it’s a safe space to process, acknowledge, and momentarily dispel those feelings.