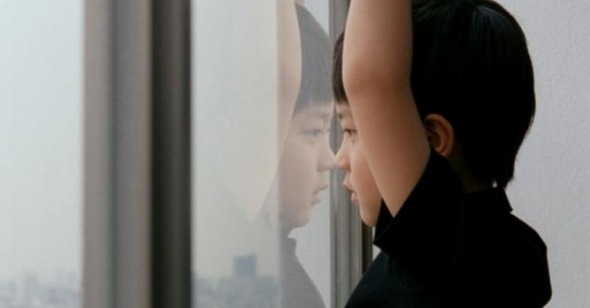 Switch Back
By Michael Koresky

Family units are impenetrable. They function on their own logic, communicate with their own specific language, run smoothly or faultily on their own ideas of happiness or misery. If a child wants to truly rankle a parent, there are few better approaches than comparing the codes and conduct of their family to another‚Äôs (‚ÄúWell, Tony‚Äôs dad lets him use the internet for five hours every day!‚ÄĚ). No two families are truly parallel, but this does not keep us from judging the way we interact with our closest relations in relation to others, and vice versa. These kinds of comparisons fuel Like Father, Like Son, the latest film from Hirokazu Kore-eda, in which characters‚ÄĒand filmmaker‚ÄĒstew on what it is that makes a good parent and what it is that defines a family.

In concept, it‚Äôs an admirable meditation, although it‚Äôs also an emotionally circuitous film, purporting to dramatize moral dilemmas but mostly biding its time before arriving at foregone conclusions. Skirting the line between gentle, Ozu-like observance and jarring melodramatic contrivance, Kore-eda dresses a ripped-from-the-headlines scenario in artful duds. Thirtysomething Tokyo couple Ryota (Fukuyama Masaharu) and Midori (Ono Machiko) discover to their dismay that their son, Keita (Ninomiya Keita), now six, was switched at the hospital with another baby, Ryusei (Sho-gen Hwang), who turns out to be the child of Yudai (Franky Lily) and Yukari (Maki Yoko). Irreconcilable class issues are the first markers of trouble on the horizon, as architect Ryota and Midori are well-to-do urban dwellers, ensconced in a sleek modern apartment, while Yudai and Yukari are painted as more salt-of-the-earth provincial folk. Further providing easy points of difference, Ryota is cold, largely humorless, and competitive, and has thus fostered a distant relationship from Keita; while Yudai is a jocular electrician and Mr. Fix-It‚Äďtype unafraid of hunkering down to grass-stain level with Ryusei or bathing right alongside him and his little sister.

Naturally, Ryota finds Yudai‚Äôs parenting choices dubious and the overall living quality of his and Yukari‚Äôs modest yet cluttered, garage-like house unacceptable for his own flesh and blood. His judgment of this family as lesser initially causes him to suggest to the other couple, in a wildly offensive overreach, that the two boys be raised by him and Midori, as it will be ‚Äúbetter‚ÄĚ for both; later, fueled by his increasing realization that he has little in common with the mild, potentially (to his eyes) unexceptional Keita, Ryota downgrades to the less aggressive proposal that they simply switch the children back, a suggestion that initiates the film‚Äôs frustrating third act. All of this odd business is dramatized with the utmost taste, so that when the film arrives at its inevitable, obvious realizations, we may feel we‚Äôve seen something of emotional import rather than a simplistic, stacked-deck evocation of a nature versus nurture debate.

Like Father, Like Son has the unfortunate effect of making Kore-eda‚Äôs greatest attribute as a filmmaker‚ÄĒhis sensitivity‚ÄĒinto a liability. Unlike his searing Nobody Knows, which justified itself by taking a subtle approach to a potentially sensationalistic topic (in that case, the true story of a cluster of young, neglected siblings left alone to fend for themselves up to and through a horrible domestic accident), this new film restrains its emotions so much as to make its central conflict nearly unreadable. Could an educated, successful, by all accounts sane businessman like Ryota really believe that trading kids would provide a workable solution? Would the openhearted, benevolent, utterly uncynical Yudai truly agree to the switch, which means wrenching his own beloved son out of his home‚ÄĒcertainly a form of child abuse? Nevertheless, the plot mechanics require that the plan move forward to its inevitable conclusion, so that illogical behavior can give birth to reassuring emotional logic.

Amidst all this, more troubling questions emerge: what about the dutiful wives, only mildly protesting at the men‚Äôs surprisingly rapid agreement to trade tots before barely speaking on the subject again? Initially, Yukari, painted as less submissive to her husband than the more traditional Midori, laughs off Ryota‚Äôs mind-boggling proposal, saying that it would not even be tenable for a pet. A case could easily be made that this is all an implicit denunciation of a long-standing patriarchy in Japanese culture, but by shunting its female characters off to the side in a film about fathers and sons, Kore-eda ends up simply reaffirming male superiority, letting the men dominate the film. Conversations about biological resemblances between the boys and their parents are always centered on the fathers‚Äô features; even Midori is preoccupied with legitimizing the child by noting physical parallels between father and son‚ÄĒlate in the film as she strokes Ryusei‚Äôs head, she marvels at how much it feels like her husband‚Äôs. Though his film goes on to indicate that such surface connections are less important than the spiritual ones forged through the transference of love and learning (in a recent video interview, Kore-eda stated his film‚Äôs self-evident conclusion, ‚ÄúPatrimony is not the only thing that determines a connection‚ÄĚ), Kore-eda doesn‚Äôt make room for the third reading: that these children are as much their mothers‚Äô creation, and in Keita‚Äôs case, probably more so.

The specter of death, and how knowledge of it affects the living, has often provided the emotional foundations for Kore-eda‚Äôs cinema, from Maborosi, with its widow trying to repair her life after her husband‚Äôs suicide; to After Life, a self-reflexive fantasy in which the deceased are tasked with making movies of their happiest moments before moving on from a heavenly way station; to Nobody Knows, Still Walking, and even I Wish, a film of deceptive bonhomie that‚Äôs in fact preoccupied with loss. Like Father, Like Son is not explicitly about death, but it is about legacy, and therefore implicitly about mortality. Ryota‚Äôs obsession with his bloodline speaks to a man well aware of his own expiration date. Even his chilly, hotel-like home‚ÄĒwhich assumes an even grimmer atmosphere when it essentially becomes Ryusei‚Äôs jail‚ÄĒhas the feel of a mausoleum.

With the behavior of the parents in Like Father, Like Son so difficult to fathom, Kore-eda ends up placing an unfair burden on the two tykes, whose ingratiating adorability ends up having to carry the film. (In the audience I saw it with, there were more patronizing ‚Äúawwws‚ÄĚ in the audience than one might hear at the Puppy Bowl.) As Keita and Ryusei, Ninomiya Keita and Sho-gen Hwang are indeed button-cute, tipping the film further into the realm of the sentimental than Nobody Knows or I Wish, which both featured preadolescent protagonists and risked but never succumbed to bathos. When these innocents are torn from their homes to satisfy Ryota‚Äôs paternalistic whims, the emotional effect feels cheap, as though the film were pretending to engage in a moral dilemma to which it already knows the answer.

Of course, there are wonderfully delicate touches: a recurring visual motif has Kore-eda‚Äôs camera drifting ever so smoothly to the right throughout patient master shots, granting scenes a sense of gradual becoming. As a filmmaker, he is never thudding, revealing character detail in marvelously minute ways‚ÄĒthe remarkable accomplishment of Still Walking is that it creates a full portrait of an entire family history over one 24-hour narrative period largely with a series of tiny gestures, glances, and reaction shots, all pregnant with meaning. Kore-eda is a master of mood, never pushing emotions into the realm of the mawkish. But this can only conceal for so long that Like Father, Like Son is essentially a maudlin morality play. To this viewer, the film seems to use its kids as emotional pawns as much as its dubious dads do. Then again, every family operates according to its own rules that some of us on the outside just can‚Äôt understand.