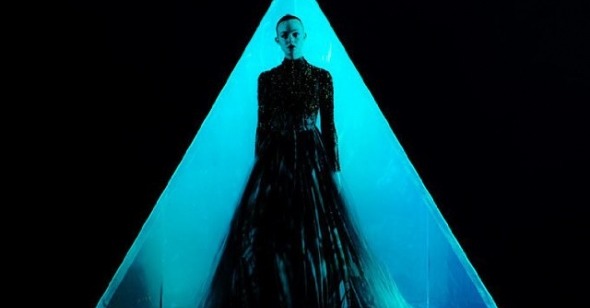 Tableaux Out
By Nick Pinkerton

In The Neon Demon, Nicolas Winding Refn continues following the aesthetic objective he plunged headlong towards with Only God Forgives: he’s in pursuit of a sumptuous, richly upholstered, all-enveloping style that unifies art direction, costume, bedazzled makeup, tamped-down performance, carefully modulated lighting gags, and soundtrack cues, all at work in a procession of hermetically sealed, meticulous framings. His latest takes place in and around the world of modeling in Los Angeles, which it imagines as fringed with quasi-Satanic blood ritual and occult mysticism, overhung with a mephitic air of Thelema and Nine Inch Nails music videos. It unfolds as something of a cautionary fable about female pride, jealousy, and consuming covetousness, and ends with an on-screen dedication to the director’s wife, Liv. As such it may be taken as a personal movie, and the personality reflected is that of a filmmaker who is trying desperately to convince you that, hoo boy, is he ever one real sick puppy, geez, wotta piece of work.

The film offers few inducements to audience identification. There is a thread of a story thin as a strand of saliva—one of Refn’s favorite porno-chic images—which begins but doesn’t end with Jesse (Elle Fanning), a milk-white naif fresh off the bus from Alabama who has begun to climb the ladder in the L.A. modeling industry thanks to some ineffable quality that everyone she meets immediately recognizes her as possessing, this played as a kind of running joke. Among those drawn to Jesse are Ruby (Jena Malone), a makeup artist who, when not mixing with the catwalking dead, moonlights at a morgue, restoring corpses to the colors of life, and two of Ruby’s model friends, Gigi (Bella Heathcote) and the indomitably poised Sarah (Abbey Lee, a model-cum-actress familiar from Mad Max: Fury Road). The girls keep up appearances with a regimen of cosmetics and reconstructive surgeries—as shot by DP Natasha Braier they have an almost plasticine sheen, a flawlessness that seems to dare you to find a single visible pore—while whatever Jesse has comes quite naturally, which begins to stir up resentment amongst her competitors.

Jesse’s sacrificial fate is anticipated in her first appearance, as she’s viewed lolling on a sofa with her throat slit and her décolletage painted with gore. After a moment it becomes clear that this is a photo shoot, a testimony to the eternal appeal of mages of beautiful women suffering horrible deaths, which has been the guiding inspiration for the career of Dario Argento, among others. This introduction sets the pattern for the film to come—once outside of the studio, Refn steers us through a procession of compositions which are self-consciously posed, micro-managed, and color-coordinated, as though arranged behind a vitrine by a small army of consultants. Between Jesse’s rounds of auditions, shoots, and runway shows for a series of men who first subject her to protocols of scrutiny—Alessandro Nivola’s prim designer and Desmond Harrington’s gaunt photographer-ghoul—she steps out with her sort-of boyfriend Dean (Karl Glusman, of Gaspar Noé’s Love). One night, looking over the downtown skyline as it passes through the various shades of dusk and nightfall, she tells him that as a girl she imagined the moon as a big eye, and accordingly she always seems to be hitting her marks for an unseen watcher—in this case, Nicolas Winding Refn, who never for a moment lets the viewer forget his authorial presence. It’s tempting to say his fingerprints are all over the movie, but truer of its immaculate aesthetic to say that they once were but have been wiped clean.

Still, Refn’s fuss-and-feathers doting is there in every just-so shot of The Neon Demon, a few of which are, admittedly, quite striking: those skyline images, Jesse lost in narcissistic reverie inside what appears to be a mirrored Thaumaturgic Triangle, or one image of Ruby relaxing in a shallow grave freshly dug into of a swath of lush green grass, the frame bedecked with soft-focus floral tufts. What is less clear is what these images are meant to provoke beyond appreciation of their not-a-hair-out-of-place polish. (Nivola’s character at one point seems to offer something like Refn’s credo, paraphrasing “Red” Sanders: “Beauty isn’t everything, it’s the only thing.”) There is a sense that they are meant to crawl under the skin, for eager-to-displease Refn piles pederasty, necrophilia, and cannibalism at the viewer’s feet, but there is nothing in his presentation that encourages us to feel for the film’s characters as anything other than mannequins made of sweet, supple, permeable flesh, and the aestheticized, antiseptic presentation further removes any sense of peril, turning the atrocity exhibition into a gore-and-glitter floorshow not so far from the S&M cabaret that Jessie and “friends” attend toward the beginning of the film, the presence of which tells you that Refn has some clear concept of what he’s doing. It’s a model illustration of the fact that a work can be at once cerebral and pretty dumb.

The Neon Demon matches exotic, voluptuary images to commonplace themes: the idea that the marketplace of female beauty encourages or even demands predatory behavior, and is peopled by spiritual cripples. The film lives or dies on its ability to seduce the viewer into an awed trance state with sheer technique, but the technique is by intention glossy and frictionless, and unable to get a handle, I found myself continually slipping into a restless indifference. There is an argument to be made that Refn is working in the register of “black comedy,” as Jesse’s rise to fame is handled as a Star Is Born success story stripped down to the most basic of dialogue clichés delivered in affectless deadpan (“You’re going to be great . . . We’ll work with all the top designers,” says a fashion executive played by Christina Hendricks). But anything resembling comic timing is bent in submission to the film’s monotonous, slide-show pacing, where each framing arrives with the air of an unveiling.

Maybe Refn intends for his portfolio of knockout images to express something about Los Angeles or female competition or male lechery or the industry that buys and horse trades in young meat, but it seems inappropriate to talk about The Neon Demon in terms of what it says about the real world when it seems so much more invested in the world of cinema. At 45, Refn has established himself as a brand-name stylist, the subject of not one but two documentaries about his creative process—remember this when anyone tries to cast him as an underdog—and the curator of a 2015 coffee table book Nicolas Winding Refn: The Act of Seeing, a “Look at my shit” collection that offers a tour of his trove of one-sheets, many of which are for the horror and exploitation films he claims as guiding influences. Among The Neon Demon’s clear points of reference are Walerian Borowczyk’s Immoral Tales (1974), likewise steeped in the legend of Countess Elizabeth Báthory, and Roman Polanski’s Repulsion (1965), from which Refn cribs the image of hands emerging from the walls of a claustrophobic chamber to menace a panicked virgin, here Jesse in her Pasadena motel room, a riot of loud, clashing patterns lorded over by manager Keanu Reeves. The set-up is noir by way of Lynch, while, like seemingly every filmmaker of large-scale ambition today, Refn has a Kubrick hang-up, manifest here in a variety of ways: Glusman first appears in the well-known glowering, lowered-brow pose, and the use of a lipstick color called “Red Rum” to write on the surface of a mirror as well as a peculiar variation on the elevator gush both register as nods to The Shining. SoCal Satanism, glam trappings, and messianic pathology can recall Kenneth Anger and Curtis Harrington, while in his gesamtkunstwerk ambitions, at least, the filmmaker Refn most resembles is Paul Schrader, particularly in the period of American Gigolo (1980) and Cat People (1982), the latter evoked when a mountain lion makes a cameo in Jesse’s room, the former in everything but the breakthrough of spiritual succor, which has no place in Refn’s nihilistic fable. (Schrader assembled a small crew of collaborators to form his atelier—Italo-disco innovator Giorgio Moroder, “visual consultant” Ferdinando Scarfiotti—while Refn’s emergent right-hand man is composer Cliff Martinez, here contributing a skeletal synth soundtrack.)

In a moment when pop movies are divided between a numbing “Based on a True Story” naturalism and sword-and-sandal or superhero fantasy, it’s all to the good that someone with Refn’s pull is trying to connect these various auteur traditions which find a rapprochement between stylization and realism. Having said this, there’s no comparison that The Neon Demon tempts which Refn doesn’t come off the worse for. The presence of Reeves is a silly stunt compared to the dense, allusive thicket of allusions that is the Lost Highway cast list. Refn is a prim provocateur next to the likes of Anger and Harrington, who worked from an experience of genuine sexual outlawry. As for Kubrick, well—along with Darren Aronofsky’s Black Swan, The Neon Demon may be said to belong to the burgeoning subgenre of Kubrickian kitsch. Though Refn’s index of culled cinematic references are in order and unimpeachable, he himself remains out-of-focus, remote. We have some idea of what the term Lynchian entails, but what would it mean to call a film “Refn-esque”?

It’s tempting to quote Gertrude Stein on Oakland in answering this question, but if Refn has an identifiable signature, it’s an inviolable belief in The Shot, using behind-glass framings as his basic cinematic unit, while sparing little consideration for how one image leads into the other. (There’s an experiment in cross-cutting here that’s laughably rudimentary in conception and execution.) We’ve all probably heard someone compliment a film’s cinematography by saying “You could frame every shot,” and Refn seems to work with this as a conscious goal. There’s a sense that he would be better suited designing Blue Oyster Cult gatefold LPs, or exploitation movie posters. Talking about assembling The Act of Seeing, Refn called the process “like editing a movie—what experience would you want to have when you turned the pages?”, and watching The Neon Demon you have a definite sense of flipping from one set-up to another.

The Neon Demon is as lethargic as it is elegant. While being methodically slapped about by its cold, magisterial images, I found myself thinking about a passage in Dawn Powell’s novel The Happy Island, in which a character muses on the perfect, serene profile of her friend: “One look was enough. Ah, there, Beauty, OK Beauty, farewell, Beauty. For there was nothing unknown here, no other quality suggested beyond the patent virtues of contour and hue, no hint of magic, no twinkly of malice. Here was Beauty Clear, and it was not enough.” Much the same can be said of The Neon Demon, a lapidary encasement containing nothing. Yet it’s one of those movies where there’s nothing you can throw at it that can’t be tossed back at you with a “But don’t you see that’s the point?” And maybe it is, but, as Mr. Schrader signed off a review of Easy Rider a long time ago: we are all too old for this kind of game, no?