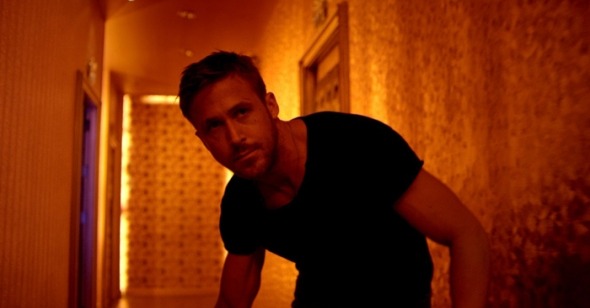 Since it‚Äôs a good bet that Nicolas Winding Refn has seen Lars von Trier‚Äôs Antichrist (2009)‚ÄĒhis father Anders edited it, after all‚ÄĒit‚Äôs likely that the ludicrous dedication that concludes his new feature, Only God Forgives, is at least partially intended as a shot against his countryman‚Äôs bow. Von Trier (in)famously flashed a card reading ‚Äúfor Andrei Tarkovsky‚ÄĚ at the conclusion of his genital-mutilating hootenanny, and the gesture was interpreted either as proof of its author‚Äôs cynicism or his cinephilia. As usual, von Trier was muddying the waters, which is one way to give shallows the impression of depth. The meanings of Refn‚Äôs citation of Alejandro Jodorowsky on the credits for Only God Forgives, meanwhile, are crystal-clear. The invocation of the octogenarian Chilean icon is at once a game of auteurist one-upmanship with von Trier (who may yet respond by dedicating Nymph()maniac to Jess Franco, or maybe Wilt Chamberlain) and an act of self-congratulation disguised as loving homage. By name-checking the crazed maker of El Topo and The Holy Mountain‚ÄĒmovies whose productions were likened by Jodorowsky to the manufacturing of psychedelic tablets‚ÄĒRefn is really running his own freak flag up the pole for an earnest salute.

That banner, held so high in the gory Viking epic Valhalla Rising (2009), was only at half-mast for most of Drive (2011), which is probably why it proved so popular with audiences and critics. A self-willed shape-shifter whose dalliance with hardscrabble (if still brutally violent and dramatically overwrought) realism began and ended with the Pusher trilogy, Refn has since made a habit of inhabiting muscular genres‚ÄĒthe biopic/prison-flick hybrid of Bronson (2008); the neo-epic sweep of Rising‚ÄĒand trying to explode bloodily through their surfaces. In Drive, Refn cunningly sublimated his more flamboyant tendencies in favor of a glistening minimalism; these faint frissons of finesse fooled more than a few smart reviewers into anointing this goony Dane as a standard-bearer for the ongoing hostile art-house/grind-house takeover.

Drive was enough of a hit that Refn didn‚Äôt have to hedge his bets making the follow-up, and if Only God Forgives has anything going for it, it‚Äôs that it‚Äôs clearly the movie that its creator wanted to make. Of course, that‚Äôs also mostly what‚Äôs wrong with it: it turns out that Refn‚Äôs sensibility, when so fully distilled, is purely and potently toxic. If the scene where retired Bangkok detective Chang (Vithaya Pansringarm) tortures an informant by impaling metal chopsticks through his hands and feet before moving onto his orifices is meant to indicate the character‚Äôs ruthlessness in the pursuit of his goals, it winds up pulling double duty as an illustration of Refn‚Äôs own overdetermined cruelty; that said sequence unfolds amidst a gaggle of demure Thai women who‚Äôve been instructed to keep their eyes closed for the duration of the interrogation only cinches the preening aspect of the filmmaking. Refn is showing us repulsive things and then daring us to blink. It‚Äôs a game of chicken initiated by a coward whose discomfort with the things that go into really making cinema‚ÄĒlike characters, a basic sense of drama, and an idea or two about the world‚ÄĒreduces him to shameless grandstanding.

Like pretty much everything in Only God Forgives, Chang is a clich√©. I defer to Kong Rithdee‚Äôs excellent observation in Cinema Scope that the character‚ÄĒwho is introduced quite literally dis-arming a man who has murdered the man who raped and killed his daughter‚ÄĒ‚Äúunites [the] enchanting Asian duality of nihilism and tranquillity in a single figure,‚ÄĚ except that I don‚Äôt find this trick any more compelling than the ciphers masquerading as symbolic archetypes in Drive. Artisans as varied as Guillermo del Toro and Michael Mann will attest to the usefulness of such blank yet familiar figures, who can pull their weight in narrative terms while also imparting a deeper sense of gravitas if they‚Äôre posed just so within the right seductive genre-movie environment: the only things that certain viewers like more than predictable characters and situations are predictable characters and situations tricked out as newer‚ÄĒand recently, preferably artfully tarnished‚ÄĒmodels. In Drive, Ryan Gosling‚Äôs (pointedly) nameless freelance wheelman did just enough (which is to say barely anything) to register as either a humorless lump or an enigmatic neo-knight-errant. Refn‚Äôs refusal to build up anything of substance was taken by many as evidence that he had in fact successfully stripped something down to its vital, pulsing essence.

In exchange for actually getting a name in Only God Forgives, Gosling gives up about fifty percent of his dialogue from the earlier film: his Julian, an American expatriate who runs a Muay Thai boxing gym as a front for his family‚Äôs international drug-running operation, seems to have had his mute button jammed into place with a crowbar. Stoically overseeing the action at a tournament being held in his gym or silently inviting a prostitute to pleasure herself in one of the back rooms, he‚Äôs a man of few words; when he learns that his older brother and partner-in-crime, Billy (Tom Burke), has been killed, he can‚Äôt even muster up a response. His tight-lippedness is infuriating to his mother/underworld superior Crystal (Kristin Scott Thomas), who blows into town hell-bent on avenging her first-born‚Äôs death and fills the awkward silences with her other son with an endless stream of invective. After inviting Julian‚Äôs quasi-girlfriend, Mai (Yayaying Rhatha Phongam), to dinner, Crystal refers to her as a ‚Äúcum dumpster,‚ÄĚ a moment which makes one wish that she‚ÄĒor maybe the posturing-writer-director feeding her lines‚ÄĒwould get with the program and shut up already.

It‚Äôs not that Only God Forgives is nasty‚ÄĒit‚Äôs that its nastiness doesn‚Äôt point to anything except the attitude of the man behind the camera. As a statement about reckless Americans adrift in an exotic, dangerous paradise, the movie is at best redundant (‚ÄúOne Night in Bangkok‚ÄĚ got there first and rhymed ‚Äúchess world‚ÄĚ with ‚ÄúYul Brynner‚ÄĚ besides) and at worst lazily racist: the locals are to a man scraggly malefactors (excepting Chang‚Äôs monkishly monstrousness tidiness) and to a woman meek, uncomprehending observers. The use of women as sculptural elements within a highly controlled mise-en-sc√®ne‚ÄĒcarried over from Drive‚Äôs egregious claw-hammer-and-hookers set-piece‚ÄĒrecalls Kubrick as surely as the blood-red d√©cor of the various hotels and opium dens or the ominous industrial thrum of Cliff Martinez‚Äôs score. But while it is probably unfair to compare a titan to such an obvious lightweight, the fact is that in, say, Full Metal Jacket, Kubrick visualizes Da Nang as a tawdry cesspool to contrast and contradict the gleaming sterility of Parris Island. The West and East are consciously and simultaneously stylized: for Refn, Bangkok is simply a grotty playground to stage his violent flights of fancy.

It would be miserly to deny the excellence of the lighting by cinematographer Larry Smith (who also worked on Eyes Wide Shut). The colors bleed across a wide spectrum of shades and tones‚ÄĒgritty dusks and muted dawns‚ÄĒand Refn does manage a few nice effects in collaboration with his usual editor, Matthew Newman: by placing the actors dead center in almost every frame and then cutting suddenly between medium-shots, the filmmakers create the impression of characters suddenly and subliminally switching places with one another. It‚Äôs a clever motif for a film that is on some (very low) level about karma and retribution, and which goes all in on a tit-for-tat rhythm that sees Chang and his crew execute each of Crystal‚Äôs lieutenants in turn between unsuccessfully staged attempts on the old cop‚Äôs life. The only real suspense has to do with whether or not Julian‚ÄĒwhose reticence in the middle of what is basically all-out warfare seems a combination of fear and common sense‚ÄĒwill eventually join the fight, and in the only scene that wrings any sort of intriguing change on narrative formula, he proves to be a pretty lousy combatant. Watching Gosling get his ass handed to him by Pansringarm (who‚Äôs got a great stone face) is surprising in light of the actor‚Äôs (increasingly silly) indestructibility in Drive, and it sets up the possibility that Only God Forgives will interrogate this well-tailored poseur‚Äôs basic weakness. But, digging so deep into his barrel of punk-ass tactics that he scrapes the very bottom, Refn decides to pivot the movie on the character‚Äôs moral fiber: even after being beaten to a swollen pulp and taking up arms against the people who‚Äôve decimated his clan, Julian is too much man to take a child‚Äôs life‚ÄĒand the filmmaker nudges us to applaud his staunchness.

Julian deserves a hand, but instead, he loses both of his: Only God Forgives concludes on a punitive exchange that is supposed to give everything that‚Äôs come before a thick gloss of honor (or something) but instead comes off as laughably pretentious‚ÄĒthe faux-Zen detachment of these final passages is the directorial equivalent of one (cleanly severed) hand clapping. What truly separates Nicolas Winding Refn from, and subordinates him to, a true pop surrealist like Jodorowsky is his obvious vanity. Say what you will about El Topo‚Äôs genuinely exploitative contents, but its peyote-flavored set pieces risk ridicule rather than simply stoking the audience‚Äôs bloodlust, and Jodorowsky‚Äôs performance as a questing and finally self-immolating faux-Leone gunfighter is far ballsier than Refn‚Äôs employment of the pinup-pretty Gosling as his onscreen surrogate. And it almost goes without saying that Jodorowsky is funnier; the only laughs to be had in Only God Forgives are at the film‚Äôs expense. El Topo‚Äôs dusty old atrocity exhibition may be a Technicolor relic, but it at least begs the question of how well it‚Äôs aged. Only God Forgives, meanwhile, will be forgotten by the time Refn makes another movie‚ÄĒor at least, he‚Äôd better hope so.