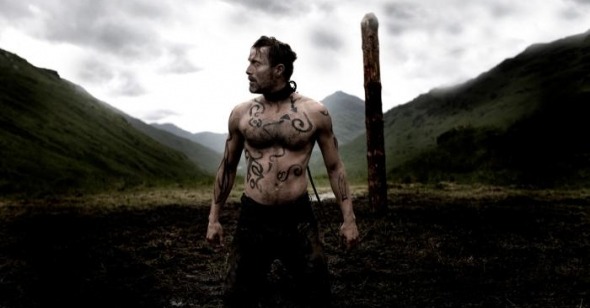 Not long into Nicolas Winding Refn’s new Viking film, Valhalla Rising, the main character, the mute and mutilated One-Eye (Mads Mikkelsen), beheads an opponent with the rope that tethers the cyclopean brute to a post in the ground. Shortly after that, he bashes in a skull with a rock, sending brain pulp the furthest afield it’s been since the fire-extinguisher scene in Irreversible. Much of Valhalla Rising plays out as so many Mortal Kombat fatalities; you can practically hear the cowriter-director’s off-screen shouts of “Finish him!” The rest is pure mood—a preposterously doomy blast of nonsense. The Middle Ages–set film is an ambitious but insufferably self-serious slo-mo death-knell, hypothetically ballasted by some ridiculous roots-of-American-duplicity material.

Valhalla Rising is Refn’s labor of love following the work-for-hire Bronson, so it’s somewhat surprising that the new one picks up right where the last left off: with its protagonist locked away behind bars. In this minimally designed version of the year 1000 A.D., that means a mist-enveloped stand-alone cell constructed from sticks and stones. With the help of his red-drenched dream sequences (shades of Refn’s bloodshot Fear X here)—in which One-Eye appears to himself as a barrel-chested transcendental being, and in which he also envisions the real-life locations of useful items, such as a lock-picking spearhead—the warrior gets sprung and brutalizes his captors, brandishing one’s head on a pike for good measure. The wind howls. An unflappable young boy, Are (Maarten Stevenson), enlists himself as One-Eye’s spokesman, and the two are shortly thereafter off with a boatload of bloodthirsty Christians to “reconquer the Holy Land.” Their leader speaks with scarifying fervor of establishing a “New Jerusalem.”

The only part of the zealots’ journey that Refn chooses to show is a stretch in the foggy doldrums. In theory, this focus on an agonizing moment of suspension is intriguing; in practice, it feels interminable (“It’s not a curse. It’s just a mist. Nothing more”—the actors are themselves stranded by the stilted English dialogue, of which there is thankfully very little). The currents eventually carry the vessel not to its intended destination, but to the verdant shores of North America, or “Hell,” as one of the film’s terse-portentous chapter titles proclaims it. There, One-Eye, inked himself with mysteriously curlicuing glyphs, builds a miniature Stonehenge; others are picked off one by one by the arrows of unseen “primitives.”

This New World-as-cesspool segment grows more abstract and more stultifying to sit through, but from the volume of the soundtrack and the amount of slo-mo utilized, one gathers that it’s meant to be the apex of the movie’s head-trippiness. Though Malick and Herzog in The New World and Aguirre, respectively, dealt with nominally similar material in idiosyncratic ways, Refn’s avowed inspiration here is Kubrick’s 2001, which perhaps partially explains his disinterest in context, not to mention whys and wherefores. He’s stuck somewhere between extended history’s-mysteries reenactment and totemic science fiction, lost in a generic no-man’s-land.

If Valhalla Rising is about anything, it seems to be the way in which Christianity has been bound up with the idea of America since its founding. Refn and cowriter Roy Jacobsen connect the deranged religious fervor of the Crusades with a distinctly proto-American strain of greed. Money is the “only way to reason with the Christians,” says a sage Norseman early on. The link between the religion’s earlier, more patently brutal incarnation and the supposedly mollifying creed of the present-day family values set is always implicit; for this reason, early Christ adopters make for convenient walking metaphors in ultra-gory period films like Valhalla Rising and Robert Zemeckis’s considerably more successful motion-capture adaptation of Beowulf. In Refn’s film, the crucifix becomes the bluntest instrument of all, but the mad-monotheism theme isn’t developed past this disappointingly adolescent point.

Refn, a 40-year-old Dane, has weathered style-over-substance charges since the release of his first film, Pusher (1996). His body of work is small but admirably varied, and he’s a talented establisher of moods, if not a sound judge of what constitutes a finished script. But while it didn’t seem possible that he would put before the camera a flimsier scenario than Fear X’s elliptical murder mystery, Valhalla Rising, with its unfiltered dread and mock-profound pacing, momentarily proves the detractors right. By comparison, the enjoyable but somewhat blockheaded Bronson looks complex, even novelistic: It’s an exuberant display of pathological behavior that posits the perpetual incarceration of Brit Charles Bronson (né Michael Gordon Peterson) as a sort of performance piece, all framed as a lunatic variation on Lola Montès’s autumnal big top. Valhalla Rising, on the other hand, merely plays like Refn’s botched bid for visionary status; it’s as if he drew a great deal of inspiration from the IFC Center’s auteur-touting, album-cover-aping Cinemetal T-shirts, but never got the joke.