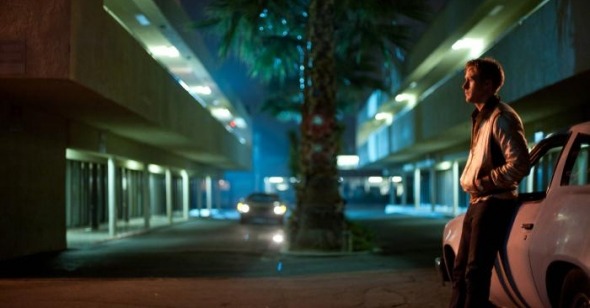 Mything Out
by Andrew Tracy

That Drive is a stupid movie doesn‚Äôt necessarily dictate that it be a bad one. Some of the more exuberant and enjoyable films of the past decade and beyond‚ÄĒthe collected works of Paul Verhoeven, Neveldine/Taylor‚Äôs Crank diptych and Gamer, Werner Herzog‚Äôs Bad Lieutenant: Port of Call New Orleans, the mighty Anchorman, William Friedkin‚Äôs upcoming Killer Joe‚ÄĒachieve greatness by embracing stupidity so heatedly that they burn right through it and look back at it, commenting upon their own stupidity (and the stupidity of the formulas, conventions, and culture that they share in) while giddily exulting in it. The now Cannes-anointed Nicolas Winding Refn has attempted to chart a similar course to the sublime by way of the stupid by treating 1980s action-movie tropes as if they were holy writ, but just as with his painfully lugubrious, Kubrick-biting Valhalla Rising, Drive breaks down under the weight of its pomposity. If nothing else (and it is nothing else), Drive is a useful example of the ways in which opportunistic filmmakers can fuse art-house gestures with baldly commercial material, particularly the idea that playing clich√©s straight equals a Bressonian revelation of their ‚Äúessence.‚ÄĚ

This last is perhaps Refn‚Äôs most pernicious, or at least most annoying, trait. Ingenuousness is the new irony, evidently, though without abandoning the old irony‚Äôs two-faced nature. ‚ÄúI used to produce action movies in the eighties. Some critics called them ‚ÄėEuropean.‚Äô I called them shit,‚ÄĚ says Albert Brooks‚Äôs mini-mogul-cum-gangster to Ryan Gosling‚Äôs nameless, toothpick-chewing Driver midway through, a wink-nudge that both mocks and validates the film‚Äôs project, and courts the like-minded in the audience. Just as music critics had a mercifully brief love affair with the likes of Andrew W.K. and The Darkness‚ÄĒwho cannily crafted stupid (that word again), regressive rock anthems, but Really Meant It‚ÄĒtheir film-beat colleagues can chortle at Refn‚Äôs retro affectations (the pink cursive titles, the tangerine dream of a synth-pop score) while blithely validating the noxious pretension of his pallid Cannon Films pastiche. If Drive is, in outline, no sillier than any of Michael Mann‚Äôs paeans to macho romanticism‚ÄĒand its effusive reception from some corners no more humorously overheated than the raptures of the Mann acolytes‚ÄĒit crucially lacks the sincerity and seriousness, however unwarranted, that Mann has always tried to bring to his signature brand of shiny pulp. Where Mann strives to give his archetypes/stereotypes human weight, Refn takes the easy route of mythic bloat; where Mann‚Äôs leadenness derives from a rooting interest in the real world, Refn happily resides in a purely intrafilmic universe.

This would be less of a problem if Refn had the stylistic chops to at least get some propulsion out of his navel-gazing silliness. The opening sequence, which depicts Gosling plying his getaway-genius trade spiriting two break-and-enterers away from the pursuing cops (and making neat use of a basketball game broadcast), is passably nifty. And as the usual wearisome tropes are duly trotted out‚ÄĒGosling‚Äôs mildly risible strong and silent act; the pretty next-door neighbor (Carey Mulligan, doing her usual elf princess act), with adorable moppet in tow, who draws out the soft heart beneath the hard-guy exterior; the hobbled mechanic mentor (Bryan Cranston) who just loves the kid like a son, don‚Äôtcha know; and the mobsters (Brooks, ostentatiously playing against type on his way to a possible Oscar nomination, and Ron Perlman, giving perhaps his first bad performance) whom the mentor unwisely ropes in to a business deal‚ÄĒone anticipates, hopes, that Refn will at least unleash some inventive mayhem to counter this parade of triteness.

As he did in his slog of a Viking epic, however, Refn demonstrates that tasteless trait common to such other transnational provocateurs as Park Chan-wook and Gaspar No√© of lingering slavishly over his violence, not stressing its kinetic impact but rather relishing the agony and mutilation it causes (recall Mads Mikkelsen helpfully removing a chained man‚Äôs innards with his bare hands in Valhalla). As Gosling starts stabbing, hammering, and battering his way through the underworld after that proverbial one last score inevitably goes sour, Refn lovingly focuses on the trauma visited upon heads, hands, eyes, and any other unwary body part, absent either Mann‚Äôs sobering gravitas (such as the chilling, almost serene slow-motion blowing apart of two undercover feds at the beginning of Miami Vice) or the breathlessly goofy velocity of Crank, which turns a comparable compendium of corporeal carnage into a giddily hilarious series of sick jokes (a severed hand turned against its fighting-mad owner, a valued comrade‚Äôs remains unsentimentally used as a human shield, etc.).

Of course, Refn is aiming neither for Mann‚Äôs real-world ambience nor Neveldine/Taylor‚Äôs culture-sponging surrealism, but Myth, or rather the bastardized pop-culture version thereof. Gosling‚Äôs purity of purpose (‚ÄúIf I drive for you, you give me a time and a place, I give you a five-minute window,‚ÄĚ he tells a prospective client; ‚ÄúAnything happens in that five minutes and I'm yours, no matter what. One minute in either direction, and you‚Äôre on your own. I don‚Äôt sit in while you‚Äôre running it down. I don‚Äôt carry a gun. I drive.‚ÄĚ) sets him up as this fantasy world‚Äôs knight errant, complete with his own heraldic insignia in the golden scorpion emblazoned on his silver bomber jacket (the kind of instantly ‚Äúiconic‚ÄĚ touch that should make any mature viewer immediately wary).

Refn has made much of this ‚Äúfairy-tale‚ÄĚ element in interviews, proudly presenting it as some sort of creative masterstroke. Mythic resonance comes cheap these days, and Refn accordingly relies almost exclusively on such paltry allegorical weight, pillaging the rag and bone shop of tired, mass-produced pop-culture tropes and brandishing them as revealed truths. Even the oft-repellent sexism intrinsic to the genre is venerated as gospel: Gosling‚Äôs hammer-wielding interrogation of a skeezy middleman is conducted against a background of bare-breasted dancers in a strip club‚Äôs dressing room, the ladies‚Äô posed indifference rendering them de rigueur formal elements rather than objects of honest prurience. (Compare, once again, Crank, with its literally ornamental pool bunnies reclining topless in transparent orbs, objectification and a comment on same all at once‚ÄĒplus the butt of a good throwaway joke when one unlucky lady discovers that a plastic globe is not the best place to be when the bullets start flying.)

Allegory inherently puts meaning at a one-step remove, and it is telling that Refn puts more stock in extrinsic interpretation than the impoverished sounds and images he has actually assembled. Gosling, for his part, has speculated on his character as a psychotic, ‚Äúa guy who‚Äôs seen too many action movies‚ÄĚ and has constructed himself as the hero of his own inner movie‚ÄĒvery nice, except that that movie is the one we are watching, and this semantic step outside the film‚Äôs text has no correlative in the text itself. The Driver‚Äôs regressive fantasy is the same one promulgated by the film‚Äôs makers, absent either an ironically critical remove or the honestly heedless dedication that might push that fantasy to its logically idiotic end. Drive derives from stupidity, but refuses to own it; Refn and company want to have their stupid cake and not eat it, offering up the film‚Äôs vacuity rather as obeisance to ‚Äúmythic‚ÄĚ patterns larger than itself. Contra Drive‚Äôs crate-digging theme song, we don‚Äôt need another hero; far more valiant is the film that indulges our idiocies to such an extent that we have no choice but to look back at our own stupid selves.