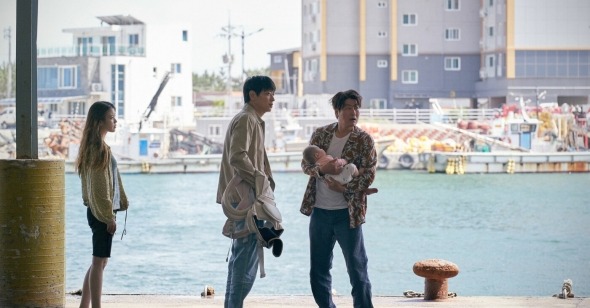 Thick as Thieves
By Matthew Eng

Hirokazu Kore-eda’s filmography is a career-length exploration of what it means to relate to others beyond the rigid determinants of age, bloodline, and class, and how the bonds we make by choice are no less authentic than the ones into which we are born and conditioned. This is not an atypical focus, but Kore-eda generally abstains from the grand sermonizing that has hobbled similar efforts by more didactic peers. In 2015’s Our Little Sister, a minor-key miracle every bit as affecting as 2018’s Palme d’Or–winning Shoplifters, three adult women gradually become devoted to their deceased father’s secret teenage daughter, an emotional thawing spelled out first and foremost in the delicate gestures and loosened bearings of the film’s bright, buoyant actresses.

Like several of Kore-eda’s previous films, his latest, Broker, coaxes its story from the headlines, though this time the Japanese writer-director has temporarily relocated his practice to South Korea. Here, Kore-eda alights on the country’s proliferation of the insulated, alarm-triggering chambers known as “baby boxes,” in which parents can abandon their newborns without obstruction or punishment. (In America, pro-lifers seeking to expand safe haven laws have latched onto these centuries-old sites as a welcome alternative to abortion.) Broker begins on a rainy night in Busan as a sex worker named So-young (Lee Ji-eun, best known as the singer-songwriter IU) reluctantly leaves her son Woo-sung outside of a church-run dropbox before a ragtag assemblage of characters are thrown into the mix. There is the fanatical detective Soo-jin (Doona Bae) who places the baby inside the metal hatch as part of an impromptu sting operation. Soo-jin knows that the baby is likely to be abducted by one of the church’s employees, Dong-soo (Gang Dong-won), who has partnered with Sang-hyeon (Song Kang-ho), a formerly incarcerated, debt-ridden laundryman, to sell these infants to prospective parents. When So-young attempts to retrieve her son, she is intercepted by Dong-soo and quickly becomes a begrudging accomplice in his and Sang-hyeon’s cross-country efforts to peddle her child. Together, with a young escapee (Im Seung-soo) from an orphanage, the group overcomes their initial unease and settles into a makeshift, provisional family, trailed from city to city by Bae’s detective and her partner (Lee Joo-young).

As part of his research for the film, Kore-eda interviewed a number of Korean orphans, many of whom voiced doubt about whether their birth was “a good thing.” In press notes for Broker, Kore-eda writes, “Could I really declare to them that there is no one on Earth who didn’t deserve to be born?” No matter Kore-eda’s good intentions, this is a loaded and even regressive question for a filmmaker to pose to present-day viewers, whether based in post-Roe America or South Korea, where abortion was effectively decriminalized by court order in 2021. Try as Kore-eda might, this is not a question that can be fenced off from the global fight for reproductive justice, a battle from which this politically evasive film has been totally sequestered.

It doesn’t take long to detect an undercurrent of conservative decorum in Broker. Kore-eda treats abortion in a coy manner that verges on the archaic; those who allude to the procedure or suggest it, sotto voce, as a reasonable solution to So-young’s predicament are mostly women, tertiary characters swiftly vilified for their views. Abortion is a dodgy practice in the world of Broker, but child abandonment is the film’s real lightning rod, a “sin” in one character’s words. By Kore-eda’s logic, the regrettable experiences of South Korea’s unadopted demand a scapegoat in the form of blithely callous birth parents. Dong-soo, an orphan nursing the chip left on his shoulder by a mother who promised and failed to return for him, subjects So-young to plenty of vitriol for deserting her child. When the detectives reveal themselves to So-young, enlisting her help in entrapping her co-conspirators, Soo-jin lashes out at the younger woman with equally inflamed critiques.

Kore-eda situates So-young’s decision to give up her baby as the film’s main ethical quandary, a selfish and unthinkable offense condemned ad nauseam, until it is finally qualified by the dark details of the character’s predicament. She seemingly has her reasons for renouncing the child, all of which draw back to her precarious history of sex work and the john who sired her son. Once presented with this history of suffering, Dong-soo and Soo-jin ultimately change their minds about So-young. But one may rightfully wonder why the motives of an ambivalent and terrified mother should come under deeper scrutiny than those of two human traffickers, whose hustle is never framed as more than a criminal quirk.

That the film summons compassion only through tragedy and antiquated stigmas seems like a surprising failure of empathy on Kore-eda’s part. He is incapable of elucidating So-young’s see-sawing motivations, making a muddle out of the lengths she resorts to so she can both keep and dispose of Woo-sung. As a writer, Kore-eda keeps putting his finger on the scale, rendering an array of background figures—a pair of scowling gangsters, a vapid pair of potential parents, a slovenly foster mother/amateur madam—as colorless caricatures in order to further flatter his central trio. As a director, he forgoes the disarming communal chemistry that always distinguishes his ensembles. Bogged down with rote banter and choppy cross-cutting, the film’s earliest passages feel at once forced and lackadaisical, flatly shot by first-time Kore-eda collaborator Hong Kyung-pyo, the otherwise gifted cinematographer of Burning (2018) and Parasite (2019).

Around Broker’s halfway mark, during a trip to an amusement park in Seoul, however, the film’s tepid comedy gives way to a gentle, melancholic register and the actors finally find their groove. The shift occurs over the course of two key moments: a hotel-room confession, played with admirable restraint by Ji-eun, and a beautiful, sensitively acted scene set atop a Ferris wheel, in which So-young breaks down and Dong-soo responds with soft-spoken tenderness and a single merciful gesture. This scene, too, threatens to sour when So-young is made to grovel for a man’s forgiveness for her supposedly unforgivable deeds, but the actors keep it afloat with their unwavering sincerity.

Even in deeply flawed melodramas such as this, Kore-eda’s belief in his actors reaps rewards in the form of unbroken scenes full of rich, heart-searching feeling. The disappointment that Kang-ho summons during his partner’s tacked-on reunion with an estranged daughter is what likely clinched the veteran star’s Best Actor prize at Cannes this year; in the actor’s final scenes, he turns his face into a punching-bag pummeled by a lifetime’s worth of regrets. Meanwhile, the perfectly deadpan Bae has the most difficult assignment, investing emotional nuance in the role of an all-business detective whose pursuit of these brokers may perhaps stem from more personal sadness. This ensemble earns the film its rueful final note, which hinges on the sorts of life-affirming human connections that transcend the barriers of time, space, and compromised films.