Looking Up: Arguments in Favor of Bigness

On the occasion of See It Big!, an ongoing film series at the Museum of the Moving Image designed to showcase the power of big-screen movies in its beautiful new theater, guest curators Michael Koresky and Jeff Reichert, the editors of Reverse Shot, created the above short film, The Big Question, and the below accompanying text on the idea of cinema as a large-format art form.

"Alone, hidden in a dark room, we watch through half-open blinds a spectacle that is unaware of our existence and which is part of the universe." That was André Bazin, writing in 1951. It's an admission that cinema is essentially solitary. But is it?

Then there's this: "Beyond a certain scale, architecture acquires the properties of Bigness. The best reason to broach Bigness is the one given by climbers of Mount Everest: ‘Because it is there'; Bigness is ultimate architecture . . . discredited as an intellectual problem, it is apparently on its way to extinction—like the dinosaur—through clumsiness, slowness, inflexibility, difficulty. But in fact, only Bigness instigates the regime of complexity that mobilizes the full intelligence of architecture and its related fields." Substitute "architecture" for "cinema," and this quote, written by radical Dutch architect Rem Koolhaas (whose buildings look like the spawn of movie set designers' nightmares/wet dreams) in his 1994 polemic "Bigness, or the Problem of the Large," suggests the other half of the dialectic introduced by Bazin, the less often discussed relationship that undergirds the cinematic experience.

Anyone who has thought and read seriously about film has been introduced to analyses of the subject/object, viewer/text interaction; unpacking this nexus is a cornerstone upon which all film theory is based. But what of the highly fungible relationship of the text and the screen on which it reaches its eventual viewer? Screen and text are inseparable, but if we are truly in an age of proliferating screens of countless types and sizes, how does a text change when shrunk down or writ large?

This question is usually framed by the cinephilic set in less conceptual terms. We ask: How are movies meant to be watched? The question inevitably, frustratingly, then raises a second question: What is a movie? And then more questions: Does the form necessarily demand the grand theatrical treatment, or does it invite an intimacy that doesn't require a communal aspect? Should we be overwhelmed or drawn in? Are movies big or small, film or video? Should they be spliced through a projector, transmitted over airwaves, or streamed onto a screen the size of a human palm? Answers will generally be delivered straight from the gut, depending on whom you ask and where they stand in relation to the ever-expanding divide. The different formations and genres that have come to fall under the title "motion picture" are so varied and so difficult to adequately lump together that it's only natural a cultural confusion about how best to receive their images has grown.

Modes of viewing have been in flux since the first stirrings of the film industry. There have always been various, and at times, competing interests in how to deliver the visual information of moving images, from laboriously named arcana like Mutoscope (which used flip cards to simulate motion), Kammatograph (in which images are etched on spinning glass), or Kinetoscope (a cabinet-like device with a viewfinder) to more sleekly modern-sounding instruments like Watchman, iPod, or iPad. We've seen films in grand movie palaces and multiplexes but before the establishment of venues specifically for film exhibition (around 1905), we watched them in penny arcades, in rented storefronts, vaudeville theaters, and tent shows. We have been alone with movies in our homes or have watched them surrounded by fellow thrill-seekers in auditoriums. We have glanced down at them while huddled over computers or looked up at them as if gazing at the stars.

Historically, film hasn't been taken all that seriously in relation to other art forms; therefore there hasn't been a widespread commitment to defining its proper viewing methods. In contrast, would anyone disagree that seeing Matisse's "The Piano Lesson" in person at a museum is preferable to looking at its photographic reproduction in a coffee-table book, or argue that listening to an audio recording of Beethoven's Piano Concerto No. 5 provides an experience as rich and nuanced as hearing a live performance of it? Film is regarded as a largely commercial endeavor, and therefore the rise and fall of its various viewing methods have been driven largely by shifting economic realities and market demands, from the licensing of films for broadcast television, to cable, to videotape and DVD, and now to downloading and streaming.

These days, accessibility and availability are prized above all. For such a vast medium plagued by years of neglect and a distinct disinterest in preservation and posterity (the number of lost films of the past 100 years is impossible to gauge), not to mention the overwhelming financial burden of producing a film, that's understandable. But this tendency paired with the 21st century's almost pathological preoccupation with mobility has called the essentialness of the moviegoing experience into question.

One could see the rise of IMAX and the recent 3-D resurgence as desperate gimmicks to get a scattered generation of movie-watchers back in the theater along the same lines as those used in the 1950s to counter the tyranny of television (CinemaScope was at the time a response to a converted TV audience—as much as the curved grand dome of Cinerama, the first brief explosion of 3-D, and the briefly wafted Smell-O-Vision—regardless of its lasting effects on filmmaking and Truffaut and Rivette's unbridled enthusiasm for it in the pages of Cahiers du cinéma). But more charitably they could also be read as attempts to remind viewers of cinema's vital properties: its kinetic movement, its sensory impact. Valid complaints about the rising costs of 3-D tickets and the form's debasement via shoddy effects and postproduction retrofitting have overshadowed the fact that, facedwith a film like Avatar, viewers are once again watching the big screen in awe, mouths agape, astonished by the possibilities of the medium, and by the fact that the screen can't seem to contain the impossible sights within its parameters.

So is this search for transcendence the reason we should return to the theater to watch movies? Is it why one should advocate putting down those minuscule viewing devices, if only for a moment, and going back to the confines of that, as Bazin infers, solitary place where so many of our dreams were born? Movies, by their essence, captivate when looming large. Yet the entire mainstream cultural and economic apparatus of film promotes the malleability and mutability of the filmic image, prioritizing content (read: "stories," as per the endless parades of film festival slogans) over how the content is experienced. In that sense, to shrink the movie image is just another way to commodify it.

Stories themselves transcend medium; the truly cinematic is a delivery method unto itself. Yet there are movies that seem to emotionally require the big-screen treatment. The stories of some can't really even be comprehended on a regular-size television: David Lean's Lawrence of Arabia demands that you feel lost in its vast desert terrain; Jacques Tati's Playtime, on the other hand, loses its own actors in its wildly complex mise-en-scène, cramming them into corners of frames you might not know exist if you watch the film on a smaller screen. Others have psychological properties that shift depending on their scale: Kubrick's The Shining functions perfectly well as intimate, domestic horror on television, yet swallows the viewer whole into its labyrinth when viewed big; on video, Scorsese's Raging Bull has the feel of an informal, ripped-from-the-headlines biopic, while on the big screen it's pummeling and voyeuristic, almost pathetically grand.

Yes, the option to watch Lawrence of Arabia on an iPod, ear buds firmly implanted, bringing the sound ever so close, while taking the Bolt Bus from New York to Boston, is available to us; and if we didn't feel like paying inflated IMAX ticket prices to see Avatar (or weren't financially able to—there are class issues related to scale as well), any number of legal and illegal small-screen options exist. But when art grows subservient to convenience—and to the business that makes convenience seem more in-demand than it really is—then everybody loses. 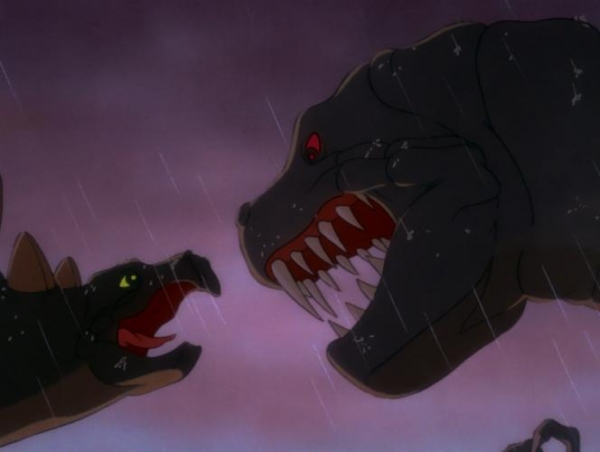 Though most of us of a certain generation have seen more films on television than in the theater, how many of us truly remember the first movie we ever saw at home? On the other hand, our first experiences in the movie theater are etched in our minds with singular, transporting, vivid narratives all their own. For the record, these writers' first films were Disney's animated feature Cinderella and Bruno Bozzetto's very not-Disney animated feature Allegro non troppo. We recall being one with each film, spellbound and held immobile; perhaps Bazin was right about moviegoing as solitary. This is the first way we truly are bearing witness to the world, alone. Even in fantasy there is verisimilitude; there is motion, there is performance and gesture, there is, always, as Bazin called it, the "myth of total cinema."

There is thus no set way that a moving image needs to be viewed, but can we finally state, incontrovertibly, that the condition of viewing affects the spectator simultaneous to the text itself? Yes, we can hold a film in the palm of our hand, but it's been traditionally the theater that we return to in order to be awed, where the spectacle of cinema can best be grasped, where we can feel its nearly gravitational pull forward. Perhaps it'll take someone schooled in the ways of neuroscience to prove just how different the effects can be, but it's a concept graspable even to a child: when Disney's Fantasia, for example, was finally announced for home video release in 1990, after many years of delays (at one point in the '80s, the studio had sworn that it, along with its crown jewel, Snow White and the Seven Dwarfs, would never come out on tape), the feeling it engendered in some of us was more disappointment than anything else. Suddenly something huge was being taken off its pedestal (and Fantasia is nothing if not a film about pedestals). The question of theater versus home-video viewing is therefore not a question of right versus wrong but rather a matter of the ever-shifting aesthetic value we place on a medium.

Perhaps some of this confusion could be cleared up with a phenomenological (and/or neurological) understanding of how the size of the delivery screen affects the act of viewing. When Bazin (and for that matter, Eisenstein, Agee, and Greene) wrote about cinema they were less preoccupied with the experience of viewing than the properties of the film that created those experiences; there were hardly any drastic variations in the way they were receiving images—their perception came from the combination of darkened room, looming screen, flickering projector. So the way we talk and write about films has necessarily changed because we can't help but consciously take into account the method of watching; that we also, with this knowledge, try to elide it and treat every viewing experience as the same, is the flip side of the same coin. So is cinema the dinosaur lumbering toward extinction that Koolhaas spoke of? Or are we—those of us, cinephiles and casual moviegoers alike, desperate to relive that everlasting moment of bigness—the dinosaurs? If it's us, then the irony in this would be that, in relation to the image at least, we want to be small.