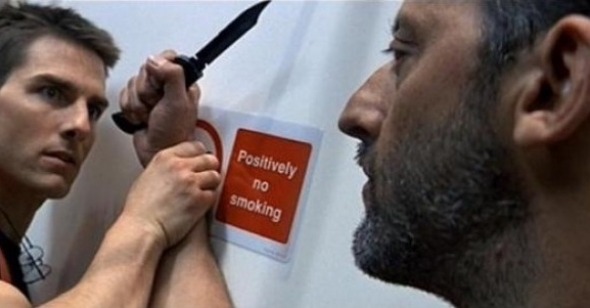 Spending a little time with the odd ducks in a filmography as vast and arguably varied (more on this later) as Brian De Palma’s often proves instructive. It’s when a director is perhaps least in his or her element that the recurring tics and traits of an oeuvre become most observable—small authorial life boats in an unfamiliar generic sea that might go unnoticed by the casual viewer, but for the aficionado send up immediate red flares. These less likely films are the ones that get relegated to the status of “minor,” or “bad” in the career wrap-ups, but works like Ang Lee’s The Hulk, Jane Campion’s In the Cut, David Gordon Green’s Undertow, Atom Egoyan’s Where the Truth Lies, or M. Night Shyamalan’s Lady in the Water, for all their variances in quality (and some of these are, to be sure, bad), are no less their individual directors’ own than more heralded outings. And in many cases, they’re often more intriguing than the agreed-upon critics’ choice—I’ll take the utterly bizarre Hulk over The Ice Storm’s plodding literal-mindedness just about any day.

The degree to which any De Palma film (excluding, perhaps, Wise Guys) represents a departure from his norm is certainly debatable given how consistently and openly he’s worn his signature obsessions on his sleeve over the course of his 30-odd films. A perhaps unlikely choice to kick-off an action franchise, coming into Mission: Impossible (1995), Brian De Palma wasn’t exactly a stranger to big budget filmmaking, and was definitely more than conversant with those elements that work best together to create audience suspense (his focus on voyeurism in his films is only important to the extent he’s manipulating what we look at in order to manufacture tension)—this is, after all, the raison d’être of his filmmaking. He’d flirted with big action set pieces in Scarface and The Untouchables, but still, Mission: Impossible, with its globetrotting team of spies and extensive digital effects work was certainly a leap; I certainly wouldn’t count the feints at international espionage (or the spurting fake blood) that run throughout The Fury as really delving into a similar milieu. Any questions about who exactly made Mission: Impossible (conventional wisdom would suggest the suppression of authorship at the hands of studio financiers, but De Palma’s manipulated that system from the inside for ages) are quickly laid to rest: immediately after the IMF team pulls off a piece of trademark deception in the opening sequence, they literally strike the set revealing a Kiev hotel room to be nothing more than a manufactured space within the confines of a soundstage, a nod back to the opening credits of Body Double.

And so on from there. The entire Prague embassy stakeout is built around apprehension and looking, with strangers masquerading and surveilling each other, and then trailing off in pursuit into the night. What could be more De Palma? Shot in scope, the whole movie is awash with walleyed spaces and canted angels (a mid-film sequence with Vanessa Redgrave is extreme to the point of recalling Eisenstein at his most baroque) punctuated by his trademark, bisected scope frames: a split focus shot with Jean Reno’s face in extreme closeup and a mouse approaching from further away, Tom Cruise in a phone booth at the extreme left edge of the frame, the side of the booth neatly cutting the image in half. These not to mention a few trademark extended POV sequences (part of De Palma’s filmmaking since his very earliest works), and those even more unsettling moments of omniscience that maintain the feeling of the camera as an eye associated with someone, scanning around a room or between characters.

All of this is just a shorthand way of saying that De Palma, a filmmaker of an obviously earlier generation, films his spaces with care even in the face of largely banal material and the possibly intrusive hands of nervous financiers or Tom Cruise. There isn’t some kind of deeper subtext at play in Mission: Impossible, this is, like Scorsese’s The Departed, a chance for a talented stylist to hone chops and muck around—and who’s to say there’s anything wrong with that? Where J.J. Abrams’s Mission: Impossible III tipped the hand of a TV hack working with an overzealous and overconfident DP (Dan Mindel has lensed notable gems like Domino and The Skeleton Key), Mission: Impossible is filled with care in the camerawork and an intuitive visual sensibility, to be expected given that De Palma’s worked with Stephen H. Burum regularly since Body Double. Only ten years on, it already looks like a piece from another era—carefully lit, designed, and edited (by Paul Hirsch, a regular since Hi, Mom!). That these things are notable at all is only due to the deplorable state of contemporary action filmmaking. It may be too early and too crotchety to be nostalgic for the last decade of filmmaking, but during the climactic bit which finds Tom Cruise chasing Jon Voight on the top of a bullet train (Strangers on a Train pushed to illogical ends?) as it speeds towards the Chunnel, I was surprised and openly thankful that De Palma made so simple a choice as suppressing the score in order to allow for a few minutes of whipping wind that perfectly captures a sense of huge velocity and thus, the death-defying stakes we ask of good stunt work. It’s all obviously green-screened, but it’s credible in a way that nothing in a recent digital abortion like Ultra Violet approaches.

By the Eighties, the oddly political bent of some of De Palma’s earlier films (especially Greetings, Hi, Mom!) had long been sublimated into a more generalized state of anti-establishment paranoia, which raises its head here. The star turn by Cruise, a perfect choice for that late Nineties moment which he so utterly dominated, also represents familiar turf for De Palma—he’s played with questions of image and identity as bumped up against that brand of scrubbed-clean masculinity of über-stars like John Travolta, Kevin Costner, and Michael J. Fox throughout his career. Mission: Impossible also offers bloody nightmares, masked deceptions, a few needlessly gruesome murders (Emilio Estevez impaled in an elevator shaft reminded me more than a little of Sisters), characters returning from the dead, and an exploding aquarium that unleashes unreal amounts of water into a Prague square—it’s surprising how much gaudy excess De Palma is able to pull off within his studio confines. Given how comfortably it all fits, perhaps we should be asking why bigger budgets don’t regularly produce films of bigger imaginations.

Proving again that reviewers are just about as likely to lose the plot as the average moviegoer, many complained of Mission: Impossible’s complexity (probably largely in response to a terrific late film sequence in which Jon Voight narrates his version of the botched Prague job that exonerates him, while Cruise imagines and De Palma shows us the correct version), but what they’re actually responding to is intricate, airtight filmmaking in an arena that had been long since ceded to the most simpleminded of hacks. It’s certainly not the most vital entry in his filmography, but the obvious filmmaking hand continues to make the case for De Palma as an auteur of note. So if Mission: Impossible is a Brian De Palma film through and though, then the only real question to ask of it is: Why no William Finley?