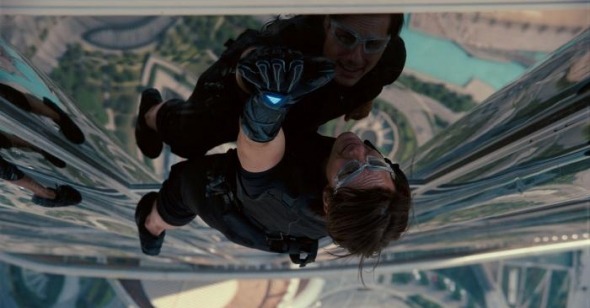 The Heights
by Jeff Reichert

Most people who pay top-dollar to see Brad Bird‚Äôs Mission: Impossible‚ÄĒGhost Protocol in IMAX will likely never notice that, as the film sprints along, the size of the image changes with some regularity. At times, usually of high action/daredevilry, the picture grows taller to fill out the entirety of the 52-foot screen. When the film calms down, its image shrinks to a more manageable size. Sometimes this transition is hidden in the space of an edit; at others, the careful observer can spy the image stretching vertically. Only portions of the film were shot with the massive cameras the IMAX format requires, marking this iteration of the Mission: Impossible series another of those ungainly hybrids that have cropped up in these recent years of high-tech experimentation with theatrical exhibition formats (remember that The Dark Knight tried this same trick back in 2008‚ÄĒto much lesser effect). What makes Ghost Protocol unique is that it‚Äôs one of the first legitimate tentpole films to go out solely via IMAX screens first, yet another in a string of desperate gambits by studios and theaters to create excitement amongst an ever-dwindling crowd of people who like to and can afford to go out and see a movie.

Luckily, though it may make for a future textbook entry about the cataclysmic shifts that marked the end of cinema‚Äôs first hundred years, the film itself is more than merely a vestigial limb. I‚Äôve long harbored a fondness for the Mission: Impossible films, the only running action franchise in which each new entry has featured a different director (usually one of some repute), each given the space to flex his individual authorial muscles, usually to audience benefit. Thus Brian DePalma‚Äôs elegant, Hitchockian kickoff gave way to John Woo‚Äôs impressionistic, hallucinatory (and often hilarious) sequel, which fed into J. J. Abrams‚Äôs (never more clearly a TV-man over filmmaker) rough and narratively twisty take‚ÄĒthe least of the bunch, but a practically Spielbergian epic compared to any of the Transformers films or other recent superhero abortions. The series has also benefited greatly from appearing with a regularity that isn‚Äôt at all suffocating‚ÄĒfour years separated the first and second, six the second and third, five the third and fourth. Clearly, no one finances the production of a Mission: Impossible film without at least vague interest in making some money, but, by maintaining a respectful distance and never rushing out entries to make for the obvious cash grab, these sequels have, more than most, retained something like integrity.

Cruise returns in Ghost Protocol as IMF super-agent Ethan Hunt, and his team has been swapped yet again to include Benji (Simon Pegg), a new-to-field duty computer wiseacre; Brandt (Jeremy Renner), a nervous analyst with a lightly mysterious past; and Jane (Paula Patton), resident bombshell with a roundhouse. The M:I films are always similar, yet never the same‚ÄĒHunt has only been granted a slender backstory over the course of four features, leaving him more or less a cipher; his satellite cast is infinitely interchangeable so long as some general marks are hit; there will be an exceedingly glamorous party arrived at via souped-up vehicle; and at some point in each film Cruise will hang or fall from a great height. The formula is durable, simple, and immediately familiar (just like Lalo Schifrin‚Äôs venerable theme), yet because it doesn‚Äôt rest on the heavy baggage surrounding the continuance of a long-running personality like, say, Bond, it has proven malleable enough to withstand the stylistic excesses of both De Palma and John Woo (when was the last Bond film directed with a sense of brio?). Brad Bird‚Äôs outing ditches the grimness of M:I-3 and returns to focusing on the Brookstone-catalogue gadgetry, mediocre-to-fair joke-making, and high-wire acrobatics that have become staples of the franchise. It‚Äôs not as idiosyncratic as any of the first three, but Bird‚Äôs clean back-to-basics approach is suitably human-scaled (the threat of mortality always hangs lightly over the series) in sea of oversized and impersonal spectacles. His overpraised The Incredibles struck a similar balance, and now seems something of a warm-up.

So, what then are Ethan and his team up to this time? First off, they must spring their leader out of a Russian prison, where he‚Äôs been kept isolated for reasons unbeknownst to them. Seemingly minutes later, the trio of Hunt, Jane, and Benji are given four hours to don disguises, break into the Kremlin, and collect information about the mysterious nuclear threat codenamed Cobalt. The job goes awry, and when the subsequent explosion that destroys the venerable architectural icon of communism is mistakenly pinned to the IMF team, tensions between Russia and the U.S. mount and the president invokes ‚ÄúGhost Protocol,‚ÄĚ thus disbanding the agency entirely, even though all parties concerned know their mission is far from complete.

Left to their own devices, they jet off to Dubai, where Ethan flings himself off the side of world-tallest 163-story Burj Khalifa hotel, and then on to Mumbai, where they must attend a Bollywood-esque party and contend with South Asian traffic to stop an imminent nuclear war. The thirty or so minutes of IMAX escapades are generally compelling and built around humans flying and running through actual space, providing a kick absent from most strictly CG affairs. A look around the audience after Cruise fell from a precarious position hanging from the side of the Burj back into safety caught plenty of mouths agape or grinning widely in the crowd. Just like in the old days of moviegoing.

But in truth, what the M:I films are ‚Äúabout‚ÄĚ (on the level of plot‚ÄĒforget grander thematics) is beside the point, by design. Notable Swede Michael Nyqvist (hero of the homegrown adaptations of the Millennium novels) has been called in to play the nefarious Hendricks (n√© Cobalt), an ‚Äúendgame theory expert‚ÄĚ who believes that world peace can only be achieved through the total annihilation of the planet, but he‚Äôs barely more present than his file photos. The recruiting of Philip Seymour Hoffman to chomp scenery through M:I-3 led to a welcome change of pace, but his inclusion tilted the balance too far from the main attraction of the M:I films: Cruise himself, resplendent, death-defying, ageless, one of the best and truest movie stars we have left. Hendricks is too absent to really register as a threat, thus blunting somewhat the film‚Äôs overall arc towards a thrilling climax. But there are sequences here, expertly crafted and almost wholly Cruise-centric, that provide more than just a momentary jolt to the senses. They leave one awash in honest-to-goodness movie pleasure.