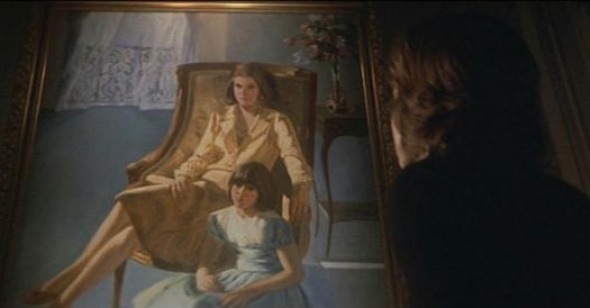 I remember reading a particularly dismissive review of one of Brian De Palma’s 1980s or 1990s films, in which the director was characterized as having “made a career out of ripping off the work of Alfred Hitchcock.” The claim is nearly indisputable, yet it’s how one values the product of said career that determines whether that’s the end of the conversation, or merely the beginning. Obsession (1976), directed and co-written (with Paul Schrader) by De Palma, is perhaps the most overt “homage” to the Master of Suspense in his body of work. “That’s a bold statement,” Vincent Vega would say, given an oeuvre sporting such Hitch-by-numbers gems as Sisters, Dressed to Kill, and Body Double.

Obsession nearly drips Hitchcock, so much so that while watching it I became preoccupied with the question of whether it’s even intelligible without the existence of Vertigo as an “intertext.” Indeed even Netflix seemed somewhat concerned I might not “get it,” informing me on its mailing-sleeve synopsis, “Brian De Palma helmed this unabashed homage to director Alfred Hitchcock’s classic thriller Vertigo.” In addition to the simple plot similarities (a man whose love has died seemingly as a result of his own ineptitude falls in love with a mysterious woman identical in appearance to the first and is offered a “second chance” at redemption, only to find himself the victim of a sinister plot), Obsession is a layer cake of Hitchcock’s greatest hits. Among the most identifiable nods are direct stylistic or thematic references to Rebecca, Dial M for Murder, and Notorious, not to mention obligatory borrowing from Sixties’ world cinema such as Kurosawa’s High and Low and an audacious camera move straight out of Godard’s Contempt.

And then there’s the music. Obsession is Hitchcock’s standby composer Bernard Hermann’s film as much as anyone else’s. Notwithstanding the aforementioned references and plot similarities, Hermann’s relentlessly baroque original score is the element in Obsession most evocative of Hitchcock (ironic that the distinctive qualities of one artist’s work should remind us more strongly of another’s). Hermann plays along with De Palma’s undertaking, not quite sending up his collaborations with Hitch, but distilling its essence and pushing it nearly to its breaking point, just this side of parody. Though the score seems to accompany every frame of the film—ethereally romantic phrasing continually contrasted with foreboding stabs of brass—one never gets that sense of exhaustion typical of overly scored films. Instead, the foregrounded music track is itself often the film’s primary pleasure, at least as integral a part of its rhetorical impact as the image. One sequence in particular, in which Michael Courtland (Cliff Robertson) must deliver a suitcase full of phony ransom money aboard a riverboat, maintains a dynamic sense of tension unimaginable without Hermann’s contribution.

All this begs the question, what, if anything, is new here? Does Obsession successfully meld all this reference-making with a separate, distinctive authorial vision? Do we really need it to? There’s no doubt most of the pleasure in watching Obsession comes from playing a somewhat self-congratulatory postmodernist game of comparing the “new version” to the original—a recurring motif of the film itself. Veterans of Vertigo, for example, aware of the deception of “Scottie” Ferguson’s “friend” will be convinced of the villainy of Courtland’s business partner Robert Lasalle—played with a delicious cajun slipperiness by John Lithgow in his breakthrough—from the start, while those unaware of the source material could harbor some doubts until it’s finally made explicit.

It’s far too easy to use the notion of homage (or theft) to avoid evaluating the additions De Palma and Schrader have brought to the equation. The main twist on the Vertigo scenario seems obvious in hindsight, given the passage of time made clear in the narrative. Yet it’s the impropriety of the secret—a very bold choice some 30 years before the excesses of Oldboy—that keeps one from guessing it, while upping the ante on the nearly nauseating misanthropy at the core of Vertigo’s plot against poor Scottie.

Many changes—some subtle and some less so—work precisely because they play so well against Hitchcockian expectations. Cliff Robertson deftly underplays the Jimmy Stewart sad sack; pathetic and morose throughout, he nearly mumbles his lines, yet somehow manages to convey that air of bland charisma so essential to success in business. Courtland is arguably in even worse shape than Stewart’s Scottie, who is at least afforded a smidgen of last-act dignity by finally getting wise to his conspirators. Courtland’s obsession is so all-consuming that he’s blinded to anything beyond doing right by his “second chance.” Confronted with a second ransom note, a newspaper clipping of the exact message he’d received 15 years earlier, Courtland stops nary a moment to consider the irony or ponder the identity of the kidnappers, instead rushing frantically to borrow money from the very man so clearly behind his longstanding misery.

The drive towards desperation and doom so inherent to Vertigo (and so clearly voiced in Hermann’s score for both films) is thoughtfully and ambiguously upended in Obsession’s climax. What seemed certain to end tragically is instead resolved in an ostensibly joyous reunion. As the camera swirls around Michael and Sandra (Geneviève Bujold) locked in embrace (citing Scottie’s re-possession of Madeleine via Judy), finally coming to rest on a freeze-frame of the gleeful pair, we have to wonder what the image really means. Is this truly a happy ending, or are we witnessing two completely delusional, hopelessly fucked-up individuals rejoicing when they should be recoiling in shame?

Obsession has aged well. The distance afforded by the passing of time and an ever-growing, popular predilection for quotation and reference seems to have dulled the critical compulsion to eviscerate such audacious attempts at reworking sacred texts, allowing the merit of Obsession’s variation on a theme to find acceptance. The “experiment” of Obsession—and the best of De Palma’s nods to the Master—enacts a number of interesting juxtapositions. Contrasting a hypermodern emphasis on style—for all his virtuosity Hitch’s work belongs to a “Classical Hollywood” aesthetic—with the “quoted” classicism of Hermann’s score, Obsession looks both forward and backward, theorizing an extension of Hitchcock’s work marked, contradictorily, as much by evolution as regression.