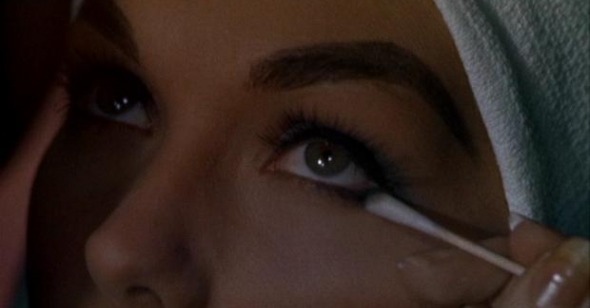 There’s something I should clarify right away. Though I had not, to my secret shame, seen Alfred Hitchcock’s Vertigo until last week, I had seen the first four reels, or, more specifically, the upper-right quadrant of those reels and little more, approximately two-dozen times. Having seen those and vaguely heard the soundtrack that went with them, I was able to fake my way through conversations with my grad-school peers. “Oh yes, Vertigo. Jimmy Stewart and Kim Novak. Great. Love the blood-red wallpaper in reel two.”

This was not some elaborate exercise in deconstructing cinema, but rather, an after-effect of my training as a projectionist. I learned how to thread 35mm with a great print of the Hitchcock film, and focus the lens on the deep black of the spiraling credits sequence. After that, my picture of the film narrowed rapidly, because I was staring fixedly at where my changeover cues would eventually come, the upper-right-hand corner. For the record, in the first three reels, they happen when Jimmy Stewart is driving his car.

Despite my extremely circumscribed experience of the movie to date, it saddened me that I’d be getting my first real viewing of it on DVD and a 20” TV. Just knowing that there’s a Hitchcock print on 35mm in your zip code makes you lament even more the flattening of the colors, the depths of the blacks, the tiny details that scream at you on the screen but are compressed into oblivion on the television, but there was nothing to be done. Universal DVD it had to be. Once I had gotten past the first four reels’ worth, and the wonder that there was four times the image I had been able to see before, I settled into the heart of the movie, the shocking narrative twists, and something akin to awe regarding Jimmy Stewart and the man directing him. As a film student, I know that this is “officially” a good movie, and I’m aware of the reputations of the principals, but tonight, I “got it” as a filmgoer too. I wasn’t playing the little analytical games that usually mark all of my viewings (“Oh, there’s the Hitchcock cameo. Oh, there’s the gaze and the fetishization”). I was just aghast of how scared I was of Jimmy Stewart. Über-wholesome Mr. Smith? I have always appreciated how Stewart played so many of his roles as a man clearly a few sheets to the wind (is there any way his L.B. Jeffries in Rear Window hasn’t been drinking all day?), which adds a hysterical and almost charming instability to his All-American men, but this Stewart character is not a happy drunk. He’s closer to psychotic. This collaboration between Stewart and Hitchcock pushes the model American male over the brink into a terrifying space, and it’s all the more effective because of Stewart’s prior film history and the warping made possible by it.

Though having seen some of a 35mm print makes me envious of audiences who saw this film on the superior format when it was new, I might be willing to concede that I got the better deal in the end. The DVD format seems a poor substitute for the enveloping experience of the theater but perhaps makes me appreciate all the more the strength of the suspense that kept me rapt even in my living room. And though I don’t get to have the excitement of novelty with this film, I do get the luxury of retrospect, the chance to appreciate where it fits into the big pictures of Hitchcock’s films, Jimmy Stewart’s assorted roles, and, not to be too grandiose, film history itself. It’s a wonderful thrill of recognition to be able see this as a shaping moment in Stewart’s career, when Hitchcock gave him a chance to prove that his strength didn’t lie in niceties, and that on the screen maybe he wasn’t always a man a girl should be eager to take home to Mother, or even take home at all.

Though Hitchcock’s films have been clichéd fodder for psychoanalytic study in film writing for some time now, it’s nice to have the historical perspective when watching this, thinking about the Rock Hudson and Doris Day films of the time, and to be reminded that at this given moment, at least one director was urging the view that all was not well at home with Mr. and Mrs. America. Maybe, in the postwar years, we were all post-traumatic time bombs. Hitchcock’s enthusiasm for dealing with deviant psychology is not just a projection of his own numerous neuroses but also a welcome break from the sugarcoated valium façade prevalent in many films of the era. Sure, Marnie was a psycho-babbling misogynist nightmare, but a lot of its failure lay in overexplanation and misdiagnosis. In Vertigo, Stewart’s Scottie, sent out to investigate the mysterious Madeleine, who appears to be yet another “Hitchcock woman,” turns out to be far more disturbed himself. (Although anyone who accepts a “Will you stalk my wife?” assignment might be a bit suspect to begin with.) But we never find out why Scottie is so obsessed with this ideal female image, and with rebuilding it at all costs. Scottie is too damaged to be easily explained, but there he is, and rightly so. Very few of us ever get a full diagnostic workup on that scary ex, just a profound sense of relief that we got away.

And Midge was lucky to get away. Initially, this girl-next-door type appears to be the film’s most well adjusted character. She’s not stalking anyone, she’s not convinced she’s some dead Spanish woman, and she hasn’t fallen from any great heights. Played by Barbara Bel Geddes, she seems to radiate good sense and wry humor, the stalwarts of a girl with glasses competing with Kim Novak for a man’s attention. But it is in the character of Midge that some of the most disturbing aspects of the film begin to surface. Despite her apparent grounding and resigned, almost ironic patience with Scottie’s obliviousness to her and his deepening obsession with “Madeleine,” her eventual attempt to get his attention is as bizarre as nearly anything he’s up to. She recreates the portrait of the “ghost,” only with her own head imposed on it, and shows it to Scottie. And, strangely, it’s the clumsiness of this attempt that seems to doom it, not the notion of the masquerade itself. After all, Scottie will be more than willing to order Judy to impersonate Madeline, after he has lost her. Midge’s reaction to this failure is overwrought and violent, totally unexpected. She literally beats herself up for the misfire of her plan and his negative reaction, and after one strike, she’s out, making no further attempts. Further, the casting of Bel Geddes as Midge intrigues me, because I best recognize her as Leonora from Max Ophuls’s Caught (1949), in which a girl not unlike Midge completely transforms herself into the image of what she imagines will snare her a wealthy man and the consumer comforts that would accompany marriage to him. She succeeds, only to discover that the man her carefully instructed image captured turns out to be a dangerous psychopath. The failure of the Hitchcock Bel Geddes character in her comparable attempt spares her another dangerous relationship this time around, and sets up an interesting play off of an existing star image.

When we look at Hitchcock in the auteurist mode, which we can’t help at this point, the impulse is to map the congruencies between the film under examination and the layout of his career. This can often be a one-way ticket to dullness, a predetermination to pigeonhole everything exactly, but it can also be beneficial. At this point in film studies, I have a lot less interest in saying, “How can I prove that this is exactly like all his other films and thus fits,” and a lot more interest in asking, “How is this different and why?” Having the blueprint of the Hitchcock Film from the work done by previous film scholars enables me to recognize, “Oh, it’s another Hitchcock blonde, she’ll be punished by the end,” but also draws my attention to the fact that we have two blondes, Midge and “Madeleine,” one surviving and the other not. “Madeleine” really only exists in Scottie’s mind, and because Midge fails to become her adequately, she is spared. Judy succeeds too well and dies for it. The image is unstable and cannot last. Being Madeleine is not the same as being alive, it is the exact opposite: a fiction imagining she is a ghost. And this proves Hitchcock was a little more self-aware of his doomed blondes than most feminist readings of his films give him credit for.

I have learned a dangerous lesson: I’m so glad I put off watching Vertigo until I had seen more Hitchcock. I’m glad I saw Caught first. I’m glad I somehow never had the ending spoiled for me. Because it’s one hell of a twist, that ending, and 50 years has done nothing to diminish it. You should see it, if you haven’t.

And I still love the blood-red wallpaper in reel two.