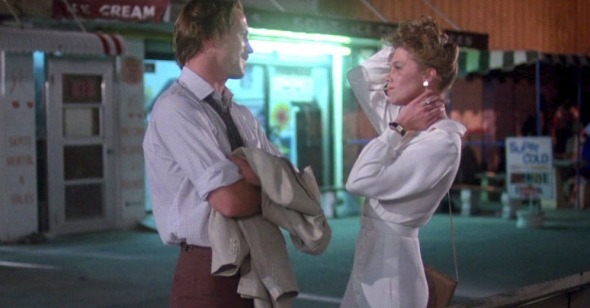 You’ve certainly heard someone at some point extol a particular movie year. When discussing American film, more often than not it’s 1939 that gets the gold star as “Hollywood’s Greatest Year,” citing TCM-approved behemoths like The Wizard of Oz, Gone with the Wind, Mr. Smith Goes to Washington, Ninotchka, Stagecoach, and others as shining (and don’t forget money-making) arbiters of a newly perfected industry. Recently, 1999 has been giving it a run for its money as, per the hyperbolic title of a 2019 book by Brian Raftery, “Best. Movie. Year. Ever.”—enshrining a moment when the excitement of the 1990s independent boom had seemingly influenced or at least allowed for a wave of ascendant international filmmakers making experimental films of both high and low budgets, from Magnolia to The Blair Witch Project to Run Lola Run. Still others may claim 1979 is The One, the last gasp of the hallowed American ’70s, with such formally and intellectually ambitious films as All That Jazz, Apocalypse Now, Being There, Manhattan, and The Tin Drum hitting screens with hurricane force. Then there's 1989, which has understandable vocal partisans considering Do the Right Thing, Crimes and Misdemeanors, sex, lies, and videotape... It surely isn’t a coincidence that these are all the ends of decades and thus the perceived ends of eras.

But wait. Isn’t 1940—with The Grapes of Wrath, The Great Dictator, His Girl Friday, The Shop Around the Corner, Rebecca AND Foreign Correspondent, Pinocchio AND Fantasia—well, “better” than 1939? And doesn’t 1999, soiled by overpraised rear-view-mirror duds like American Beauty and Three Kings, seriously pale in comparison to 2001, which had Mulholland Drive, A.I., In the Mood for Love, and The Royal Tenenbaums? And we love 1979, but what about ’72...and ’74... and ’75?

Okay, this is getting ridiculous. The point is, of course, that these conversations are not merely subjective but also, like all types of canon-making, prone to willful blinders, heaps of generational nostalgia (also known as personal bias), and the often unexamined arbitrary nature of putting films into sharply defined groups based solely on release dates. Yet here we are, launching a new series of symposiums based around, if gently ribbing, this particular critical approach. What we have discovered over the many years that we have conducted year-end polls and decade-end essay symposiums at Reverse Shot is that looking at the general releases of any given year is valuable, and to elevate some above others only serves to remind one of the necessity of historical completeness and complexity.

So then, why 1981? Our initial answer was a curt why not? In fact, this was our first guiding principle. If we agree that every year is worthy of study, then we felt we could select any to make our point clearly. The year 1981 made us laugh. Cinematically it’s neither here nor there, sandwiched between agreed-upon renaissances. A cursory inspection proved more mildly interesting than awe-inspiring. There were marvels, there were duds, there were mediocrities, like any year. The randomness became less important, however, than what might be revealed and clarified by the selections. As we always do with Reverse Shot symposiums, we wanted the ideas—the general cohesion of our vague editorial guidelines—to come from the writers.

At some point, however, this exercise began to take on a different political tenor. It felt likely that by discussing these films we would reveal something about a U.S. and larger world caught at a perilous moment. This was, after all, a year that kicked off with Ronald Reagan's inauguration, and therefore one cannot discuss 1981 without acknowledging the beginning of an inevitable slide towards the reactionary social and fiscal conservatism that, in 2022, has, with shocking harshness and seeming finality, been achieved in the Supreme Court. (In 1981, Brett Kavanaugh was still having a blast at Georgetown Prep, the Federalist Society for Law and Public Policy Studies was one year away from formation, and the first AIDS cases were officially reported—history’s awful wheels set in motion.) As this year has trudged on, and our world—and especially this perhaps irreparably damaged country—seems to be ever more on the precipice of moral and physical collapse, 1981 started to feel to us more of a turning point than a middling cinematic interzone.

What does this mean for the movies, which by this time had begun unofficially giving up on the idealistic promise of the lonely ’70s? The death knell is commonly attributed to the treatment of Cimino's Heaven’s Gate, which had its disastrous official premiere in November 1980, before a truncated edit and re-release in April 1981. Heaven’s Gate is a film out of time—it’s not very ’80s, but this defiantly faux-maximalist, anti-western immigrant drama doesn’t feel very ’70s, either—but then so are many of the films that will be discussed in depth as this symposium rolls out over the coming weeks. There are pre-digital special effects extravaganzas, depressing comedies, urban crime thrillers, early no-budget American indies, animated family movies. Almost all of them, though, are about failure—the failure of systems, of relationships, of rescue missions, of political action. Maybe this wasn’t so random after all. Welcome to our Summer of ’81.