Best of the Decade #4: Toni Erdmann 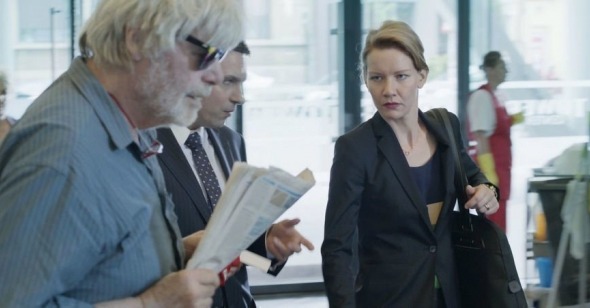 In German writer-director Maren Ade’s prickly relationship drama Everyone Else (2009), flailing architect Chris (Lars Eidinger) reproaches his sprightly music publicist girlfriend, Gitti (Birgit Minichmayr), after a get-together with a more accomplished, bourgeois couple ends sourly. “You’re so embarrassing,” he declares, cutting through her like a knife. You’re so embarrassing. That sentiment, so seemingly infantile yet replete with frustration and pity and dissatisfaction, in part describes Ade’s three films so far.

Consider 2016’s Toni Erdmann. When her father appears sporting fake teeth and a bad wig, claiming to be the life coach of a high power executive, corporate consultant Ines (Sandra Hüller), crucially, decides to play along. Winfried (Peter Simonischek) calls himself “Toni Erdmann” in this guise; it’s a nod, Ade has said, to funnyman Andy Kaufman’s similarly obnoxious alter ego, lounge singer Tony Clifton, though Winfried’s dopey getup more resembles an off-brand Tommy Wiseau. Disguised as this oddball character, Winfried inserts himself into Ines’s life, approaching her friends and colleagues as if he belongs to their milieu of worldly professionals, despite spotty English and a brusque, unbecoming manner. In Toni Erdmann, the distress of mortification reaches toward absurdism without crumbling into mere cringe-humor. Such embarrassments counterintuitively dignify the meaningless, the silly stuff that exists for its own sake, by pitting it against the treachery of a neoliberal project increasingly defining the 21st-century vision of European progress.

Toni Erdmann opens with Winfried answering his door, then retreating and reemerging as his alleged twin brother—who, he says, recently went to jail for sending mail bombs—to a confused delivery man. At a family gathering later that evening, Winfried appears donning chalk-white face paint without giving an explanation. “I have a stomach ache” he offers the curious. Ines, on a short visit home, extinguishes her father’s game. “Am I supposed to get it?” she asks, mildly annoyed. So easily could Simonischek have leaned into the trope of the old, delusional fool, self-amused with his childish pranks and gags, and ignorant to his own pesky ways. Yet with the Austrian actor’s warm, deliberate touch, Winfried’s eccentricities come across like curious relics, wholesome attempts to seize a bit of joy in a world of cold propriety and dull exchanges. The sun is setting on his generation of postwar idealists and starry-eyed revolutionaries, whose worldview is rendered increasingly obsolete by the saturation of capitalist imperatives, streamlined productivity, and time-is-money mentality that defines his daughter’s working philosophy. Winfried, a semi-retired music teacher, lives his day-to-day seemingly as a series of goodbyes: a teenage piano student drops by unexpectedly to announce he’ll be ending his private lessons—he simply lacks the time. In turn, Winfried asks the boy to take a look at his Mac computer, which he hasn’t quite figured out yet. Later, at a recital celebrating a teacher’s retirement, Winfried and his students emerge in zombie makeup (the same pasty maquillage he’s wearing when he meets up with Ines) and launch into a cheery elegy: “Here today, gone tomorrow/just arrived, gotta go.” And of his beloved dog Willi, old and practically immobile, his mother inquires why he hasn’t put the poor animal to sleep. “Why don’t I put you to sleep?” Winfried retorts.

There is no one more seemingly unlike Winfried than his own workaholic daughter, Ines, whose name brings to mind the cruel Inez Serrano of Jean-Paul Sartre’s No Exit, a woman who, unlike her fellow condemned, exhibits a shrewd intelligence and self-awareness of her condition. Living in Bucharest in an expensive, but sparsely filled condo, Ines is an ambitious consultant for an oil-company with dreams of executive power. Work-related validation attenuates a deeper misery. So entrenched is she in her career that professional substitutes hijack personal activities: social events take the form of networking opportunities and team-building exercises; sex is wielded and restrained to sharpen her business acumen and to summon psychological control over her male colleagues. Such a calculated, insular existence is thus threatened with the unannounced arrival of her hippie-ish father, who first makes himself known with a gag, by joining her phalanx of walk-and-talkers in his Toni duds as the group breezes through a foyer.

Ines’s eyes flutter as she registers her father’s appearance with a microsecond glance—it’s one of Hüller’s many brilliantly restrained reactions, glimpsing panic before reverting back into autopilot. Stunned, she pretends not to see him. Ade draws parallels between these forms of performance, that of Ines’s corporate yes-woman and Toni Erdmann’s bumbling prankster, a simulacrum of elitism based upon Winfried’s off-the-cuff, mocking ideations of what elitism might look like (like being chauffeured around in a preposterous Hummer limousine). Scooped up by Ines’s assistant, Anca, following his failed first attempt to make contact, Winfried inquires of the young woman what it’s like to work for his daughter while Anca nervously lists off a number of hotels and their amenities as if he were an important client. “Performance, that describes your job?” Winfried muses when Anca praises Ines’s helpful performance reviews.

Ade’s past work demonstrates how self-conscious motivations, the desire to sculpt impressions, is guided by performance, though the protagonists of Everyone Else and The Forest for the Trees decidedly fail in their performative attempts to convey normalcy, success, and cool. If Ade is interested in Winfried as relic, this fascination applies not just to his generational incongruity but also to his childlike spirit, his delight in playing games and dumb jokes. Ade repeatedly leaves traces of childhood on her grown characters, rendering them, to varying degrees, unfit for their adult environments. Melanie, of The Forest for the Trees, cathartically scribbles on her wall like a defiant child in an episode of rage; and at the film’s beautifully ambiguous conclusion, a seeming act of suicide doubles as a moment of soothing regression, in which Melanie abandons the wheel of her car and crawls into the backseat, hoping to return to a time manned by mom and dad.

Gitti and Chris of Everyone Else anchor their relationship in play: ugly dancing in a makeshift discotheque, turning knobs of ginger into lascivious voodoo dolls, falling dead into a pool after a pretend gunfight. Perhaps such games distract from the reality of their disaffection, yet I can’t help but understand their childish form of bonding as an expression of their trust and emotional transparency, and that through these methods, for better or worse, they feel at home with one another. Indeed, Ade takes seriously the Freudian dictum that our truths, or at least our inhibitions, are relayed and released in the form of jokes. This notion blooms into a compelling humanism in Toni Erdmann, which avoids, through Ade’s precise characterizations, the ugly, short-sighted Kumbaya spirit of Hollywood’s recent humanist fare, and its attempts to bridge racial divides through humor (i.e. Green Book, The Upside).

How are you doing? Countless times I’ve felt the empty perfunctoriness of this question thrown my way without regard for the answer. Ines shares such a cynical worldview. “Lots of words buzzing around here—‘fun,’ ‘happiness,’ ‘life,’” she reacts to her father’s attempt at a heart-to-heart. So clouded is she by the metrics of corporate progress and ladder-climbing that basic human feelings come to sound like advertising jargon. By this logic, human lives themselves lose significance, allowing cruelty to go unchecked under the guise of economic efficiency. Ines’s position in Bucharest involves dealings with an oil company, whom she must convince to outsource their labor force, effectively firing a significant number of their employees. On a trip to one of their oil fields, Toni accidentally prompts the firing of a protocol-defying laborer, which he scrambles to undo. Later, in search of a spot to pee in a nearby forest, a friendly local invites Toni into his modest home to use the toilet; moments later, Ines reveals this man and his family will be kicked out of their soon-to-be-demolished residence when the company buys out the land rights. “Are you even human?” Winfried asks his daughter at one point, a question that goes beyond Ines’s mechanical behavior, seeming to apply to the merciless business practices plaguing Europe, whiplashing poor and working-class people in less affluent towns and countries into unemployment and homelessness. Bucharest is home to the largest shopping mall in Europe, Ines points out. But who is even shopping there? Few have money to spend.

So too does Ines willfully suppress the sexist inequities that persist in her workplace, even in spite of her hyper-competency. Though certainly put off by Toni’s methods—farting induced by whoopee cushion, impromptu cheese grating, and most egregiously, claims of extravagant importance—her colleagues merely shrug. Several give him their cards—because who knows what might play to their advantage, and because, after all, Toni is a man. Meanwhile an important contact, the American CEO of a Romanian company, enlists Ines’s services to take his wife shopping. News gets around that she’s sleeping with a colleague. The man, a small, douchey sort, admits their boss is fine with it. But he’s been told not to fuck her too much, or else she might “lose her bite.”

Before Toni Erdmann, Hüller was best known for her breakout performance in Hans-Christian Schmid’s Requiem (2006), where she plays an epileptic student convinced that her condition is a demonic possession. That performance, a maximalist tour-de-force wherein coming-of-age romanticism meets a physically embodied madness, demonstrates the limberness and precision of Hüller’s craft in broad strokes. As Ines, however, the actress achieves a rare feat, registering simmering interiority while playing off Simonischek’s dowdy goofball in a deadpan that brings his performance full circle. Hüller transmits depths through the slightest modulations: Ines—her fluttering anxiety, bouts of dead-eyed dissociation, and eventually, flickers of amusement—comes through in the cracks of an otherwise frigid, hawkish demeanor. Perhaps the film’s greatest moment of all, and certainly Hüller’s most delectable, comes seemingly at its most purely random. Toni runs off to attend an Easter gathering arranged in the home of a woman he met at one of Ines’s networking events. Ines joins, under the alias of Miss Shnook, Toni’s assistant. She paints eggs. Why? Because it’ll be nice, her father insists—so would a song. Toni jumps on the keyboard and loops the intro to Whitney Houston’s “The Greatest Love of All” until Ines—mortified, angry, vulnerable—looks out at the expectant audience, and launches into a full-blooded rendition. Presumably like in the old days.

Why does Ines play along? Why isn’t there a moment of fiery resistance on her behalf? In her father she sees a man so detached from the world she now occupies, a rumpled oddity from another country, not clever or willing enough to put on the sanctioned airs of chic and sophistication of Bucharest’s business elites. But while there’s shame inherent in the act of looking down on your loved ones, which so frequently comes not just with generational transitions but economic, educational, and cultural ones as well, so too is there an inevitable recognition. Ines originally rejects the notion of her disheveled, goofy father imparting useful lessons, yet “life coach” Toni delivers an oddly life-affirming education through the sheer uselessness and gratuitousness of our most inane and vapid comic impulses. Not because they deliver a solution, or forge among us a sense of unity, but because tapping into these depths keeps us honest. To the most embittered, the greatest pessimists among us (a dominant mode, I would think, in these politically dire times): “Don’t lose the humor.”