Best of the Decade #5: The Master 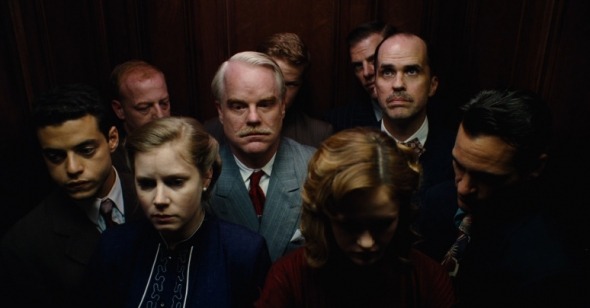 All You Zombies
Violet Lucca on The Master

I first heard the story, with the understanding that it was almost certainly apocryphal, while I was working at a comic book shop: Robert Heinlein, Kurt Vonnegut, and L. Ron Hubbard were drinking together after a science fiction convention, bemoaning how poorly the genre paid. Hubbard said that the real money was in religion, and so the three writers made a bet to see who could invent the most profitable one. Vonnegut created Bokononism, the paradoxical faith of Cat’s Cradle; Heinlein, an agnostic who grew up in the Bible Belt, seemingly abstained; and Hubbard produced Scientology.

That the least talented writer among them won this bet is less of interest to me than the idea these very different men were just hanging out, as colleagues do, and that they were indeed colleagues for many years. I imagine them together, embodying the sort of wild incongruity that an “opposites attract” Hollywood flick perpetually strives for. Had Hubbard—who peddled the sort of cheap, hastily penned dreck that made Vonnegut want to distance himself from science fiction—successfully taken the edge off of some uppers he’d popped earlier by drinking with them? Was he resentful that he was taking away time from grinding out some sci-fi to be social? Was Hubbard carrying himself like Lancaster Dodd, a confident and honey-throated bullshitter? Or was he behaving like Freddie Quell, a jittery wreck with only the desire to fuck and get fucked up, thoroughly unsettling Heinlein and Vonnegut?

These, of course, are the characters of The Master, which was released a few years after the heyday of Project Chanology’s righteous and dadaesque campaign against Scientology, is plainly about the process of building a cult on the scale of empire, and the sort of lost souls (rich and poor) who get sucked in. But Paul Thomas Anderson’s film—which alternates between sly innuendo, historical references, and bald expressions of heterosexual, masculine id (such as the scene in which the cult leader belts out “Go Roving” in a room full of naked women)—isn’t simply about America’s unique deference to and abuses in the name of religion. The distended fight between Freddie (Joaquin Phoenix) and Lancaster (Phillip Seymour Hoffman) could represent any number of tensions: between a father and his wayward son; the older Hubbard who battles a flawed, younger version of himself; Classical versus Method acting; Freudianism versus empirical behavioralism; the scientists behind MK-Ultra and the type of people they unethically experimented on, or so on and so it goes. But it’s also a philosophical riddle emblematic of the great science fiction of the twentieth century, a time and space-crushing black hole in a narrative that is always expanding. Though it’s generally bad form to present multiple interpretations of a film in a single sentence, the implication being that the director has rather cowardly created ambiguity rather than stand by a single idea, all of these readings ring equally true. In choosing this postwar milieu, Anderson expresses something elemental and yet highly specific to its time—Lancaster is the type of deeply flawed, selfish man with too much power who led the latter half of the 20th century astray, and remains at the top well into the 21st. He is the past, our horrible present, and even worse, the future: a time-traveler of the most diabolical variety.

As in the opening scene of There Will Be Blood, which shows a man crawling in and out of a hole he’s made in the earth, like a lizard, The Master starts off with Freddie peering out from beneath his tan navy helmet, same color as the ship—a primitive man poised to emerge onto an expressive landscape. When he’s on shore leave, he sits by himself, clumsily chopping up coconuts. He’s apelike, using simple tools to create beer-coconut water; but there’s no 2001: A Space Odyssey monolith in sight. His fellow seamen are wrestling and hooting elsewhere on the beach, men that are also apes or roughhousing boys or puppies. Yet when Freddie joins them, and pantomimes fucking the sand-woman they’ve built for a bit too long, it becomes clear that he is another beast entirely. Later, back on the ship, his mates pitch bananas at him as he lies on top of one of the highest parts of the destroyer.

It’s Freddie, not Fred or Frederick—the cheerful “ee” sound at the end giving his name a nonthreatening, childlike sensibility, or maybe that of a pet. Back on land, at a hospital for other servicemen who have endured “stresses” during wartime, Freddie folds into himself. The institution offers no diagnosis, and his encounters with its staff are meaningless: a nurse gives him pills; a Rorschach test reveals that he’s as sex-obsessed as his sand-fucking might suggest; he chuckles at a doctor who wants to know more about a crying spell and bedwetting. The audience—we who have the ability to identify and say what couldn’t be said about traumatized veterans in the 1940s and 1950s—are only given the most oblique clues about his problems, a stark contrast to the vast majority of other period pieces, which, when attempting to depict the past as messy as it truly was, imbue it with contemporary values that make it anachronistic, or insert markers that make clear to us present-day folk what exactly was going on. (Similarly, in Phantom Thread, it’s unclear whether Reynolds Woodcock fits into the modern-day categories of homosexual or bisexual, or if he’s simply willing to bed his wife Alma at least once in a while.) Deprived of hindsight, we can only see what civilians of the time saw: a damaged vet, as inscrutable as any other film noir antihero or villain. There’s no telling if he’s victim or villain, denying us a point of identification.

After failing to reintegrate into civilian life—as a department store photographer, or as the lone white day laborer on a farm—Freddie escapes mob justice (after an old Filipino man ODs on his toxic moonshine) by stowing away like a rat on Lancaster’s ship. We never see the men’s first meeting, only the morning after, when Lancaster is at once charmed by Freddie’s mixology skills, but also wary of his pugilism. Lancaster tells Freddie that he’s “aberrated” and should not be working, the sort of rigorous psychological diagnosis that could only come from a writer. Yet he allows Freddie to join the entourage of true believers, and Freddie soon becomes a test subject for the Method.

“You’ll be my guinea pig and protégé,” Lancaster tells Freddie, something that a man without serious problems would know to run away from.

The Method that Lancaster is refining is alternately pleasurable and frustrating—the opportunity to excavate emotions and past traumas in a society that orders everyone to bury their feelings and move on. During an informal, experimental processing session (in which blinking is forbidden) with Lancaster, Freddie reveals that his mother is in a mental hospital, his father died of alcoholism, and he had sex with his aunt Bertha (twice, because she looked good). A miserable history, one that could perhaps explain away all of his pathologies. But this isn’t science. Next, Freddie reveals the thing he thinks is his problem, the one that leads him to leave Lancaster’s fold: Doris Solstad (Madisen Beaty), a girl back home.

He relives—or maybe imagines—a reunion with Doris as part of the processing. He looks tall and gallant in his navy blues, walking in the sunlight near white picket fences, a contrast to the dim overhead lights of the ship’s interior. They sit together on a park bench, and Freddie can barely look at her when she asks him why he hasn’t been writing. He’s as embarrassed as a teenager, slumped down so that she’s taller than him. There, he does the math and figures out how old she is: sixteen. So is it that Freddie is in fact a much older man lusting after a teenager, or is it that he can’t envision himself as anything other than a hunched-over degenerate who looks like he’s in his forties? Has the stress of war aged him so drastically, a man who was already vulnerable and fragile? Is this our clue that Freddie’s trauma caused him to become unstuck like Billy Pilgrim in Slaughterhouse Five, and he has been condemned to relive his difficult life again out of order, and thus perpetually disheveled and out of step with those around him? The reverie ends on the morning he ships out for Shanghai, as he rips open her bedroom window screen and passionately kisses her goodbye. The cerulean, predawn light fades into the blue of the rippling sea, and Freddie returns to 1950 and Lancaster’s ship, mystically becalmed.

Much later, after he’s served as a pitchman, official photographer, toucher of windows, brutalizer of critics, transcriptionist, and carrier of heavy objects for the Movement, Freddie returns to Doris’s house. (It’s also after he’s stolen Lancaster’s motorcycle during a game of “Pick a Point” in the desert, one of many moments of humor in The Master that are underappreciated in appraisals of the film.) When Freddie walks up Doris’s street, Anderson shoots from the opposite side as it was in Freddie’s memory/fantasy, violating the 180-degree rule. This subtle disorientation makes clear that his wild romantic plea won’t end as he’s dreamed—yet the film’s most explicitly mystical moment isn’t too far away. Doris’s mother appears at the door and, through a long, awkward conversation, informs him that his time has long since passed; she’s got two kids and is called Doris Day now. Freddie, who has likely self-medicated with some mixture of turpentine, gasoline, and grain alcohol, is next seen sleeping in a movie theater during a children’s cartoon matinee. An usher brings him a telephone: it’s Lancaster, that other great love of his life, urging him to come to England immediately. He’s figured out how to cure the insane! He knows in which past life they’d met! Then, Freddie wakes up again. Was what he experienced a dream, a telepathic message from Lancaster, or a rip in the space-time continuum? A form of communication only available to souls who have been properly processed?

Freddie, who has failed to make his dreams with Doris and so many others come true, finally realizes his desire to resolve his bond with Lancaster. His final tête-à-tête with Lancaster in England follows the classic pattern of an abusive relationship: he first threatens Freddie (vowing to make his assault fiercer in the next life), and then serenades him with the old standard “Slow Boat to China,” gradually circling back to hostility with a menacing enunciation of the line “All to myself alone.” Despite these theatrics, performed just for him, Freddie still chooses to leave. Through a stroke of luck or proper visualization (honed through hours of trying to touch a window and feel something else), Freddie finds a woman in a pub with proportions like the one his crewmates made out of sand; he’s traveled back in time again, all the way back to the start. He begins a playful processing session mid-coitus, clumsily imitating the sort of encouragement that Lancaster might (“you’re the bravest girl I’ve ever met!”). Whether any part of him is less damaged, save for his kidneys and liver, is unclear; he might even be worse. But now, the damage remains submerged. At least he got one last fuck.