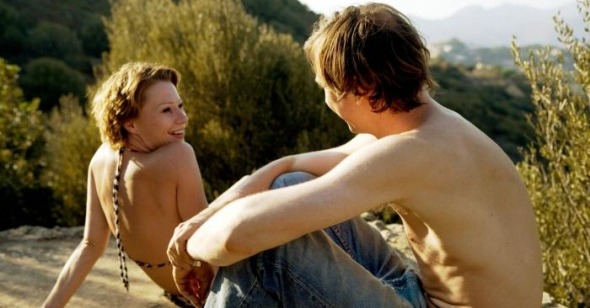 With or Without You
By Eric Hynes

It‚Äôs as a couple that we come to know Gitti (Birgit Minichmayr) and Chris (Lars Eidinger), the two main characters of Maren Ade‚Äôs Everyone Else. Their individuality arises from within couplehood, rather than the other way around‚ÄĒor rather than separate from it. But the more we learn about them, the more they seem to strain against the boundaries of togetherness. The central tension‚ÄĒin a film defined by frictions‚ÄĒis whether Gitti and Chris are better off together or apart. Everyone Else holds absolutely nothing back yet still leaves that tension unresolved, and it‚Äôs as good a filmic Rorschach as you‚Äôll ever see: one is tempted to speak of the film with shoulder-shrugging clich√©s about the irrationality, impossibility, cruelty, and fickleness of romantic love or about the intertwined dance of love and hate. But the events of Everyone Else are simultaneously too uniquely banal and too irreducibly profound for those handles. In its own wild way‚ÄĒand precisely because of its wildness‚ÄĒAde‚Äôs film is a perfectly complete portrait of romantic entanglement. Being on the inside can be brutal, but few things are as worthy of the trouble.

As the film begins, Gitti and Chris are passing pleasant days in Chris‚Äôs mother‚Äôs Sardinian summerhouse. They babysit Chris‚Äôs sister‚Äôs kids, lounge by the pool, take afternoon naps and make mascots of ginger snaps. Their differences are apparent‚ÄĒhe‚Äôs inward, quiet, and faintly noble, while she‚Äôs emotive and earthy‚ÄĒyet complementary. But mutual annoyances quickly make themselves known. Gitti can‚Äôt sit still. When Chris retreats to the quiet of a book, she gets restless and pesky. Chris tends to kill joyful moments with waves of mopey self-doubt. He not so silently disapproves of her watching TV, and she thinks he takes himself too seriously. Whenever each is feeling vulnerable, the other offers comfort but also a bit of malice. He worries over his masculinity, and then she praises his prettiness. She says she loves him, and as if to avoid both appeasement and clich√©, he refuses to say the same. Subtly, and without Ade formally privileging either party, we see Gitti through Chris‚Äôs judgmental eyes. Then over time we feel that gaze, identify with Gitti, and look anew at Chris. Yet on second viewing, with plot expectations aside, the above can just as easily be reversed. Each of the characters is dominant, and each is subject. Everyone Else works as well as it does because it witnesses an even fight.

After a bloody encounter with a glass door, Chris spends a day on the couch with a bandage stuck to his forehead and his thoughts sifting through his life and future. When Gitti returns from an excursion, he wants to talk. ‚ÄúIt‚Äôs so silly, how I live,‚ÄĚ he says, and she freestyles a long rejoinder about his idealism, his fear of failure, and why they should just take a chance and move in together. When she finishes he looks at her with contempt. ‚ÄúWhy do you think you know me so well?‚ÄĚ

By now we‚Äôve learned that he‚Äôs an architect and she‚Äôs a music publicist, and can infer that Chris is the more educated and moneyed of the two (his family has a house in Sardinia, after all). She doesn‚Äôt really get what he does, and he in turn doesn‚Äôt seem particularly interested in what she does. The latter isn‚Äôt so much of a problem, as Gitti‚Äôs sense of self seems independent from what she does for a living, but the former is no small matter. In a later scene she says, ‚ÄúI don‚Äôt care if you‚Äôre not successful,‚ÄĚ not realizing that instead of comforting Chris she‚Äôs exposing their incompatibility. Chris can‚Äôt live with himself if he doesn‚Äôt succeed professionally and artistically, and her unconditional acceptance threatens to hold him back.

Our sympathies shift when Chris‚Äôs impatience starts to resemble condescension, which becomes most apparent when two new characters invade their idyll. At the supermarket they first avoid and then greet Chris‚Äôs old friend and fellow architect, a hulking Julian Schnabel type named Hans (Hans-Jochen Wagner), and his Crystal Gale‚Äďhaired girlfriend Sana (Nicole Marischka). They agree to have dinner at Hans‚Äôs place, where they drink champagne, talk about architecture and design, and watch the small fractures in their relationship split wide open. Facing this self-satisfied yet admiring colleague, and eyeing his porcelain-pretty‚ÄĒand pregnant‚ÄĒpartner, Chris shows a self-doubt eclipsed by envy, aspiration, and a sudden revulsion for Gitti, who tries to defend Chris against Hans but mistakes collegial encouragement for belittlement. Chris repays her by unleashing his inner Haneke. ‚ÄúYou‚Äôre so embarrassing,‚ÄĚ he says.

Considering the math‚ÄĒstrictly twos and fours‚ÄĒit‚Äôs a miracle that Ade‚Äôs scenes don‚Äôt come off as acting exercises. The world comes crashing down and then rises up again all within a dinner conversation, and then again in a day hike, and then again and again‚ÄĒbut Minichmayr and Eidinger are so fully present for every second of screen time that there‚Äôs no stepping back to admire the strain. Which is not to claim that performance isn‚Äôt happening, or that the actors are somehow realer than real, but simply that narrative and character progression never yield to scene-making. Considering the intensity of what transpires in those scenes, Everyone Else (and not the futon films of Swanberg & Sons) merits comparison to the work of John Cassavetes, in which the momentum of life similarly pushed characters from one unbearably honest moment to the next.

Like Mabel in A Woman Under the Influence, Gitti stifles herself and retreats inward, appeasing Chris and hating him for letting her do it. ‚ÄúSometimes I want so badly to be different for you,‚ÄĚ she says, and he never really protests. So she buys a bourgeois dress, cooks a proper meal, and plays the role of docile wife when Hans and Sana come over for a retry. Chris is slow to recognize her sacrifice, and by unknowingly forsaking her for these bourgie pigs he risks destroying whatever love she has left. The real Gitti returns before the night is through, yet now she‚Äôs motivated by anger rather than joy. She pulls a knife on Sara, leaps from a window unnoticed (echoing a daydream that Chris recounted earlier in the film), and fucks Chris goodbye precisely when he feels most committed to her. It‚Äôs never clear if these people should be together‚ÄĒI flipped from no to yes from one viewing to the next‚ÄĒbut in this climactic dinner party actions and reactions rapidly outdistance wants or intentions, as if the relationship were a slippery fish eluding hands and vanishing downstream. The relationship may be ending, and maybe it should be ending, but a sudden demise can still feel like a cheat, or like a tragedy.

For a few moments during the dinner party sequence, Everyone Else elevates from an uncommonly wise, collaboratively masterful film about couplehood‚ÄĒindeed, it‚Äôs among the best ever made‚ÄĒto something unspeakably sublime. The drunken foursome lounge in Chris‚Äôs mom‚Äôs kitschy birdcage room (glass birds hang from a white porcelain tree) as a saccharine German torch song plays on a rack stereo system. Hans puts the song on randomly and exults with ironic appreciation. Sana, the very embodiment of high class, goes girlish, revealing that she used to adore the singer, Herbert Gr√∂nemeyer. While the men groan, Sana looks to Gitti to commiserate, but Gitti‚Äôs too preoccupied with this violation of Chris‚Äôs mom‚Äôs sanctum (during an earlier visit, she endures Chris‚Äôs interpretive dance to Julio Iglesias and Willie Nelson‚Äôs ‚ÄúTo All the Girls I‚Äôve Loved Before‚ÄĚ‚ÄĒshe also retreats here when Chris stays out all night drinking). But the song continues to play. The camera settles on a two-shot of Chris and Gitti, with him standing at left, looking back at her while she sits against the wall. ‚ÄúI love you so, so much,‚ÄĚ Gr√∂nemeyer sings. ‚ÄúMore than you realize.‚ÄĚ For a moment it seems they‚Äôre alone together, and the lyrics bounce between them, a borrowed, sentimental language of true feeling. Then Hans stops the music. ‚ÄúI can‚Äôt take it anymore,‚ÄĚ he says off-screen, as the camera (Bernhard Keller‚Äôs cinematography is an invisible force of geometric relational articulation throughout) hangs on Chris and Gitti for a moment longer. Then Hans enters from the right and disrupts the frame, and the moment, and perhaps the couple, is broken. Events speed up again, things happen as they will, and that brief convergence of kitsch feels more and more like the bleeding heart of the film.