Best of the Decade #12: Moonlight 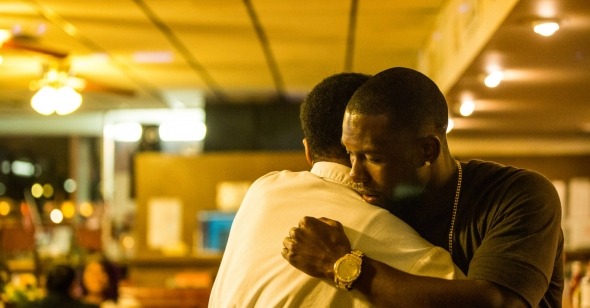 In the first act of Barry Jenkins’s Moonlight, Little, played with quiet reserve by Alex Hibbert, is taken under the wing of Mahershala Ali’s Juan. The local drug dealer has developed a soft spot for the boy after he finds him hiding out from bullies in an abandoned apartment complex. In one of the rare sensorially calming moments of the film, Juan teaches the young boy how to swim in the ocean. James Laxton’s camera dances in the waves, dipping below the water line as the strings of composer Nicholas Brittell’s chopped and screwed classical score merge with the lapping of the waves; it all feels like a grand and distant memory.

The scene is a trust fall. Little, who has spent the preceding time onscreen withdrawn, enfolding himself into a thick shell of quiet self-preservation, is quite literally being held, possibly for the first time in his young life. Not the cloying way his drug-addicted mother holds him, but the kind of holding that lets you know you are both completely safe and completely free. Juan tells him, “Let your head rest in my hand, relax. I got you. I promise you, I'm not going to let you go... feel that right there? You’re in the middle of the world.” Soon Little is swimming on his own. Afterwards, Juan and Little sit on the beach facing the waves. Juan says, “At some point you gotta decide for yourself who you’re going to be. You can’t let nobody make that decision for you.” Little looks up at him in silence, as he often does, taking it all in. This early lesson sets up one of the major themes of Moonlight: how to keep who we are alive within the socially dictated confines of who we are perceived to be.

Soon after it premiered in 2016, Jenkins’s timely second feature already felt like one of the most aesthetically and socially important American films of the new century. Moonlight arrived as an answer to a call that mainstream culture was only faintly beginning to hear, shining tender light on the coming-of-age story of a young, gay, black man from a rough neighborhood in Miami. The film is divided into three segments, each at a different phase of Little’s life. The acts are labeled with the name he chooses for himself during each period. In childhood, he accepts Little, the nickname given to him by his bullies. In the second act, Ashton Sanders expertly transposes the experiences of a bullied boyhood into the boiling frustration of a frustrated high schooler; the shy and tormented teenager now goes by his given name, Chiron. In adulthood, Trevante Rhodes plays the hardened man Chiron becomes, now going by Black, the nickname bestowed on him by his childhood friend and secret love Kevin. The scenes comprising the first two acts unfold in a way that feels both specific and habitual, circling back to common threads that compose Chiron's formative experiences. The cinematography, editing, and sound design support this sensation of repetition and circularity. When teenage Chiron is accosted by his mom, Paula, on his way to school—in a brilliantly unwound performance by Naomie Harris—the camera becomes subjective, almost dizzying. Sound and image go out of sync, mirroring an expression of the disassociation that occurs when something familiar is failing you; reality no longer feels real, but it's more present, in-your-face than ever. Paula wants her son to give her his money so she can buy more drugs; the camera movement accentuates both Chiron's deepening emotional withdrawal and his mother's desperation. In this scene, we are witnessing one moment of trauma from his childhood, with full knowledge that this episode could have been substituted by any number of others.

Each moment onscreen creates a rhythm that gives texture to all the other days surrounding them. That is not to say that the early scenes of the film are made of interchangeable moments, but rather it shows how, as in life, sometimes it’s difficult to know which moments will be significant until much later. Formative experiences are treated as they come in reality, like a passing breeze, yet the cumulative impact creates an inescapable imprint that carries over into whatever comes next. Jenkins, who often cites his early influences in the films of Claire Denis, Wong Kar-wai, Hou Hsiao-hsien, and Lucrecia Martel, builds the narrative not through plot points, but through a pervasive dance between feelings of pressure and release. This approach, favoring the emotional flavor of a scene, as opposed to the narrative arc, is rare in American cinema generally, and nearly unheard of when focused on subjects who are not white and middle- or upper-class.

Jenkins adapted the screenplay from Tarell Alvin McCraney’s play In Moonlight Black Boys Look Blue. Though the two didn't know each other at the time, they were contemporaries in the same Miami neighborhood, Liberty City, where the film takes place. The play was based on McCraney’s experiences growing up quiet and gay in an environment steeped in toxic masculinity. Jenkins took McCraney’s foundation and incorporated feelings from his own childhood into the emotional landscape of the film. These roots are palpable in the final work; more than anything the film feels like a window into an internal process rather than something manufactured for external consumption. No scene in Moonlight feels disingenuous or exaggerated in order to take the viewer on an emotional ride. Instead, the film gently and precisely offers a chance to bear witness to the alchemy of change unfolding within the shy young protagonist as he comes of age in a world hostile to his sensitivity.

As the film builds, the societal constraints gripping Little/Chiron/Black become increasingly oppressive. McCraney’s original script covered the earlier part of Chiron’s life, the third act was Jenkins’s invention. The film language in this final act changes as well—the moments become more specific, as if all the earlier impressions were building toward the long-awaited reunion between Kevin and Black. By adulthood, Trevante Rhodes carries the weight of all the years that led him there into every micro-action. The release that occurs as he approaches his truth by the end of the film is as powerful a catharsis as anyone could hope to see onscreen. In its highest exaltation, cinema has the power to lead audiences toward greater empathy and understanding, yet rarely in mainstream media is that empathy given the chance to emerge from the story of a gay dark skinned black man from South Florida (or anywhere else). This is what makes Moonlight’s relative commercial success and Best Picture win at the 89th Academy Awards so remarkable; it isn’t a star vehicle, it isn’t about a heroic figure overcoming insurmountable odds, it doesn’t attempt to astonish the viewer with any kind of sensational crescendo. The stakes of the film are wholly internal: can Chiron be himself? It's as simple as that, as devastatingly complex as that.

There is a full video online of the bizarre unfolding of Moonlight’s Best Picture win in 2017. It’s worth revisiting as an uncannily apt document signifying an important cultural moment. To recap: Warren Beatty and Faye Dunaway, Hollywood royalty of yore, stand on-stage to present the trophy. Beatty stares at the envelope a moment too long, Dunaway stares at Beatty and whispers, “You're impossible—come on!” He hands the envelope to her and she warmly announces La La Land, the predicted winner. The La La Land producers are two minutes into their acceptance speech before the mistake is finally caught. “This is not a joke, Moonlight won Best Picture,” producer Jordan Horowitz repeats until the enormity of the gaffe fully sinks in. The Moonlight team comes on stage, and there is a literal passing of the baton, from the staid self-celebratory past to a more complex future belonging to the underdogs. All of this occurred just two years after #oscarssowhite, and one year after the Academy tried to correct course in a concerted public effort to diversify its voting block by inviting 683 new members. Hollywood could not have orchestrated a more explicit scene to describe such a turning point.

Without wanting to overstate the importance of the Oscars, since most great cinema flies under the Academy's radar anyway, Moonlight's win that year matters. It came at a politically critical time, just a month after Trump's inauguration, while the simmering hatred of our country's bigotry was still boiling over. It was important for such a nuanced work to receive the highest of mainstream accolades when it did; a gentle, if passing, reminder to the American public that this country's story can, and should, be told in a multitude of ways. For a brief moment, there was a kind of hope that mainstream culture was becoming more inclusive, not in the mass-market superhero way, but in actual recognition of a wider and subtler variety of expression. Of course, two short years later, Green Book won Best Picture. With each passing year it becomes clearer that both the Academy’s and our country's representational problems are far from over, but Moonlight's win showed us what is possible and that we always have a choice.