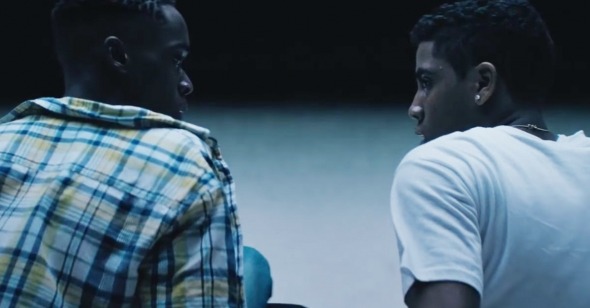 In a perfect world, the arrival of Moonlight wouldn’t be very special at all, but it has been heralded, rightly, as a groundbreaking work. In the way it dares to make a gay African-American man not only the center of its narrative but its guiding emotional perspective, Moonlight feels distinct and new, but it’s also remarkable in form, coasting on a unique internal rhythm. Directed with a rare combination of aesthetic vigor and emotional delicacy by Barry Jenkins, and based on a play by Tarell Alvin McCraney with the beautiful title In Moonlight Black Boys Look Blue, this is a film that resonates in our culture and moment not because it was manufactured to matter, but because in its every breath it has clearly stayed true to itself. This is all we should ask of film.

Moonlight constantly vibrates with a rich specificity of vision and place: an increasing rarity in an American film industry in which movies are erasing all signs of cultural particularity in the hopes that films will play just as easily—or even easier—to foreign markets, especially in Asia. What gets sacrificed then are such insignificant matters as language and desire, environment and politics . . . dreams. Moonlight is a dream movie, however sobering, an unintentional corrective to the unwelcome path of contemporary movies, a work that, right from the beginning, feels both of its moment and ours.

To the strains of Boris Gardner’s “Every Nigger Is a Star,” drug dealer Juan, played by wildly charismatic Mahershala Ali, pulls up in his car in an anonymous driveway in the lower-class Miami suburbs, the camera following him in an elaborate Steadicam shot as he steps out of the driver’s side and crosses the street to meet with a group of other men on the job. The camera is restless, circling them to seemingly no end, taking in the broad scope of the sun-drenched neighborhood, before their casual business conversation is interrupted by a bunch of kids who fly through the shot like a flock of geese. After a cut, we see that the majority of them are in pursuit of one tiny boy, who seeks refuge in an abandoned apartment. Juan, clearly having picked up on the unfair chase, comes to inspect upon the timid, barely speaking lad (Alex Hibbert), whom we come to learn goes by “Little.”

This nickname is, in fact, the first chapter title of the film; the two subsequent chapters will also be named after the young protagonist, charting his growth and the effect of social conditioning on his sense of self-worth. What makes Moonlight particularly resonant for so much of its audience (at a second, larger screening I attended, grown men were wiping their eyes midway through the film) is that by focusing on one man’s experiences it says so much about the toxic culture of masculinity that creates, aids, and abets so much of what happens to all of us. “Little,” né Chiron, and later renamed “Black,” is a mess of always legible human contradictions; his fear of his own incipient homosexuality leads circuitously but rationally to violent, aggressive behavior, but never in this empathetic film is it implied that such behavior is strictly his fault. In one of the film’s recurring sad truths, even those who reach out to him are in some way part of a system that keeps him down. A rare source of patience in a pressure cooker neighborhood, the kindly Juan becomes a father figure to Little, much to the chagrin of the child’s emotionally abusive mother, Paula (Naomie Harris), addicted, in a terrible irony, to the crack sold by Juan and his associates. Later, after teenage Chiron (Ashton Sanders, his whole body and face folding in on itself in exquisitely essayed adolescent torment) finds his first sexual and emotional outlet, with his cocky yet sensitive longtime friend Kevin (Jharrel Jerome), the latter is easily manipulated by a gang of bullies to publicly beat and humiliate Chiron, an event that leads to a no-turning-back moment for the young man. With Juan, with Kevin, and with his mother, Chiron experiences a constant dance of pain and love; it’s a coming of age story in which, for much of its running time, the negative far outweighs the positive, though the glimmers of positive (a calming swimming lesson; a beachside sexual awakening) are so quietly glorious and forceful that the film, like Chiron, still seems on the verge of possibility. That dreams can still be made and perhaps realized.

The final chapter is all about the ache of romantic possibility, and it’s the heart of the matter. Now buff and sculpted, packing a gun and sporting a grill on his teeth, Chiron is “Black” (Trevante Rhodes) and he looks like a model of male strength, or at least an idea of what male strength is supposed to look like. Selling drugs in contemporary Miami, he would seem to have followed in Juan’s footsteps, yet Jenkins and Rhodes never let us forget the quiet Little and the quivering teen Chiron behind the steely façade. After being contacted by Kevin (Andre Holland), trying to get back in touch after years of not communicating, Black drives off to meet him at the diner in which he now works as a short-order cook. One could see everything else thus far as prologue. The remainder of the film, a scene of constantly thwarted and misdirected seduction mostly set in that diner, best shows off the film’s stage origins, but is perhaps even more reminiscent of the kinds of elusive games of desire seen in the films of Wong Kar-wai (Jenkins has cited Three Times as an influence, the most Wong-like of Hou Hsiao-hsien’s films). What one remembers about this exquisitely choreographed final section is not only the subtle thrusting and parrying of the writing—in which Chiron and Kevin each make timid advances, only to retreat, talking of their pasts and their presents in heavily coded words of unmistakable romantic longing—but the physical positioning of the actors: Rhodes, still and hulking in his diner booth, Holland bustling about the restaurant as he delights in making something flavorful for his long-unseen friend. This is a perfect visual expression of how it’s always been for Chiron, neurotic, pained, anchored in place while the world moves around him. It also recalls the film’s first diner scene, in which Juan feeds the nearly mute Little, after rescuing him from the bullies. Then, as now, he can barely speak while another man tries to wrench information out of him. As a child, it was his name and address. As a man, it’s what he wants. In either case, the question is the same: who are you?

Moonlight hinges on the best kind of cinematic suspense, and it’s as heart-grabbing as the tension in any thriller: can our main character—he is our eyes, our point of view—finally show us and himself who he is? By this point in the film, Jenkins has presented such a finely crafted cinematic world that he can let the camera and actors rest. What Moonlight is saying and doing is so powerful and singular that it barely has to push very much at all for its climax to be cathartic. Its quiet ending has the power to speak volumes: to black men, to gay men, but also, one hopes, to all men, for whom bottling up painful truths is a daily way of life, every choice a maneuver in a society that prizes stoicism and straightness, in all its meanings. Moonlight is a love story, but its romance seems beside the point, in a way. How often have we seen such vibrations pass between two men on-screen, whether friends, family, or lovers? It’s enough to make you tremble.