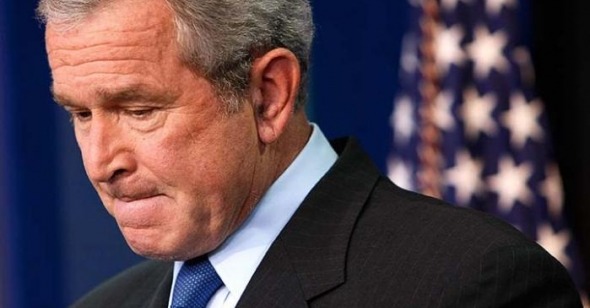 It became quite apparent in 2004 that the root of the Michael Moore problem is that both his captive audiences and vehement critics tend to make grander claims for his films than he ever does. It’s a situation that quite poisons the discourse for the rest of those who might just be entering the fray. Must we love him or hate him? Can’t we just regard him and his films as (sadly) curious objects floating amidst the unending tides of Hollywood banality and Indiewood quirk? It’s a pity, as his movies are nothing if not curious, never really answering as many questions as they raise, never coming across as strident as those arguments that take place after they’ve finished. That he happened to put together his most cinematically accomplished and topical work in Fahrenheit 9/11 only fed fuel to the fire. Unfortunately, in most cases it was Michael Moore, and not the issues his film raises, who ended up tied to the stake.

If there is any single reason why Fahrenheit 9/11 is invaluable, it is as a resource for future generations—the widespread claim that the film will irrevocably date after November 2 is very nearly dead wrong. As a cause-and-effect narrative of our America of the past four years, the film lays out not only the questions we should now be raising but those we will still be asking 50 or 100 years from now. Agree or disagree with its conclusions and innuendos, the film breathes deeply of its—wholly American—ability to raise the inquiry that forms its core. Michael Moore’s right to make Fahrenheit 9/11 is indisputable (at least for now), and if you can turn your conclusions to $100 million at the box office, then more power to you.

It’s doubtful that Fahrenheit 9/11 will be remembered as a work of art as great as, say, Peter Davis’s comparably infuriating and brilliantly structured Hearts and Minds, released in 1974, similarly at the moment of duress it was hopelessly documenting with mounting rage. However, if the recent events at the nefarious Republican National Convention taught us anything (besides that voices of reason within that party have now been completely snuffed out of its platform), it should be obvious that in the current American mentality direct address is more crucial than art-world acceptance. It’s sad to say that we don’t need Marker or Godard right now, but it may be terribly true. What better revealed our country’s encroaching ahistorical sensibility than that startling moment when Governor (!) Schwarzenegger spoke quite apocryphally about the evil Communist tanks rolling down the Austrian streets of his boyhood, then one day hearing President Nixon speak out against the Reds and exclaiming “the Republican party is the party for me!” That the invocation of Nixon’s name was greeted with whooping cheers and grateful applause was otherworldly and disconcerting; that this was all happening at the same time that right-wing revisionists were on a rampage to tear down John Kerry’s war hero legend and, in effect, reclaim the U.S. failure in Vietnam as some sort of partisan triumph, was downright dystopic. Let’s not even go into the creepy Vonnegut-ish “flip-flop wave,” just one hand’s half-turn away from a “Heil Hitler” salute.

If it’s not clear yet, what’s at stake in this critical time is not so much the further entrenching of a specific political ideology but that the end game of that ideology is the destruction of all dissenting views, and with them the death of America as we’ve always been taught to envision it. The great experiment, the so-called “melting pot” of cultures, peoples, and ideas, now threatens to turn out nothing more exciting than a flavorless beef stew, and everybody’s so caught up in election polls and the latest attack ads that they don’t even realize what’s truly at risk. However, for all our bluster about democracy and equality, is there a chance that maybe we’ve overrated ourselves a bit? Was the U.S. of A really a break with the past or just a bend in the river? And if we choose to believe in the fundamental optimism of the former option, what can we meager film-lovers and writers do to counter this current moral and political downfall?

Perhaps not much, but it’s become so taboo to constantly centralize our place in the world, to view every economic and social base as symptomatic of some sort of American identity issue that this sort of self-aggrandizement has become a self-fulfilling prophecy of paralysis. Film-lovers we are, but there’s nothing in the rulebooks that suggests that we need to be check our politics at the box office. For this issue, we asked our writers to pick a film that spoke to them about where America is right now, and where it might be heading in effort to erect our own platform, however shaky, on the foundations of cinema. The results prove that European and Asian filmmakers can reveal as much about American influence on the world as those born on U.S. soil—Michael Joshua Rowin’s examination of Rainer Werner Fassbinder’s 1979 Nabokov adaptation Despair shines as much light on the current sociopolitical climate as Stacy Meichtry’s Bush-era interpretation of Kevin Costner’s panoramic western Open Range. Both conservative and liberal discourse currently present themselves as united fronts, leaving less and less room for compromise. As with our This Means War symposium from the dreadful summer of 2003 (a summer that doesn’t seem to have any end in sight), Reverse Shot is trying to re-inject some sense of plurality into the debate, through our favorite medium.

Even if granted a second term to muck around with, it’s unlikely that George W. Bush will be able to shake the reek of historical footnote that hangs over his figure. That he will one day sit alongside Harding, McKinley, and Nixon in the pantheon of disgrace doesn’t make our situation any less urgent, but might provide light at the end of the tunnel. As always, where better to look than to our artists for answers…no, better yet, questions? What Michael Moore’s critics don’t ultimately understand is that his populist tactics do not reveal pandering or condescension but a pure impulse to get Americans to disrupt their own complacency and question the world around them. It’s an age-old approach to philosophy; maybe that’s why it seems so antithetical to politics.