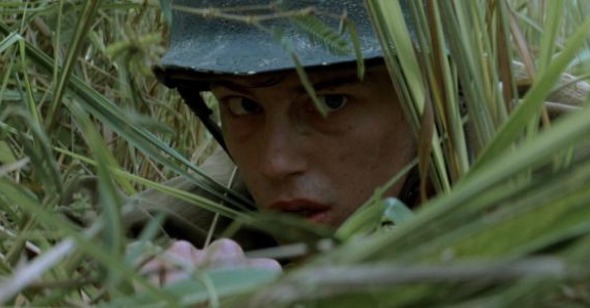 Project for a New American Criticism,
Or: How We Learned to Stop Worrying and Hate the War

A cursory scan of the seven or eight film reviews in the New York Times on March 21, just a few days after the United States’ “decapitation strike” that launched the new Iraq War reveals no mention of the dramatic goings-on, unless you count a half-hearted nod to “the world outside” buried in A.O. Scott’s review of Dreamcatcher. Seemingly innocuous, this type of elision is indicative of a widespread critical epidemic. By denying movies their status as the late 20th Century’s most important format for intellectual and cultural exchange, apolitical criticism has managed to blunt their potential impact. If even the nation’s most influentual critics can only judge movies only as cheap “entertainments” that exist in a cultural vacuum, it might be time to start reassigning the blame for the sorry state of American cinema from clueless corporate studio heads to their equally unimaginative counterparts in the realm of film writing.

What’s passing for film criticism these days operates under the same rules as the Bush administration’s foreign policy. Both offer a categorical denial of causes, effects, opposition, and difference—in short, erasing all traces of reality to avoid true political discourse. The “Bush Doctrine,” put to paper in 1997 by the conservative “Project for a New American Century” (signatories include hawks Cheney, Rumsfeld, and, appropriately enough, Dan Quayle), asserts that “..a Reaganite policy of military strength and moral clarity may not be fashionable today. But it is necessary if the United States is to build on the successes of this past century and to ensure our security and our greatness in the next.” These principles all but dictate that any successful global policy must consider War as preferable to diplomacy—boiling international complexities down to the level of a vast video game. Let us not forget that this is a time when the most overtly self-proclaimed politicized Hollywood movie is simultaneously the most apolitical. If The Matrix and its birth-defect sequels purport to leave their audiences questioning the validity of their simulated environments, and then refrain from any sort of specific social or political discourse, its viewers remain stuck in their pods, complacent subjects of the very Hollywood system that pretends to be “opening their eyes.” However discreetly, the Wachowskis’ CGI fashion show doesn’t truly want to reveal the corrupt machines that control our airwaves, broadcasts, and perceptions; rather it validates the video game mentality that has plagued pop culture for over 20 years, and has now overtaken public policy. If this is the “battle against the machines,” who’s waging it?

We certainly didn’t begin this issue with any sort of targeted agenda, or put forth any prerequisites for our writers. But the eventual width and breadth of the symposium pieces revealed a common perspective, shared through cinema, that film writing must attempt to link back to the world beyond the screen. With American soldiers still being killed in the Middle East, and the Iraqi people suffering from post-attack fallout, Bush’s constructed war is hardly over. We’ve won, but at this point the main question must be: “Won what?” Avoiding the question is inherently irresponsible. Reverse Shot has ended up with an historical thru-line, reflected in cinema, attesting that 20th century war never ends, each battle plants the seeds for the next, from American WWII intervention (Huston’s post-traumatic camera gaze, Malick’s fragmented Guadalcanal diaries) to the Yom Kippur War to Cold War paranoia to the current media-age sensory attack unleashed upon us all. And if we learn anything from the fact that in 1972 Irish Catholics in Londonderry were being murdered for re-articulating an anti-colonialist dissent uttered half-a-world away in Algeria in 1954, it’s that each continuing conflict is mirrored from one society to the next.

Sometimes irreverent, sometimes painfully earnest, these films are endlessly instructive. Not to deny the cultural impact of films that depict the horror of war from the front lines (All Quiet on the Western Front, Paths of Glory, Platoon, Saving Private Ryan and countless others all deserve their print space as well), but the conventional war film is eschewed here. One would be hard-pressed to find examples of clear-cut movie heroism in these pages, but the violence of political outrage is always palpable. The words of protest are out there, etched in celluloid; we just wanted to make sure they weren’t ignored. Call it our own personal battle against the machines.