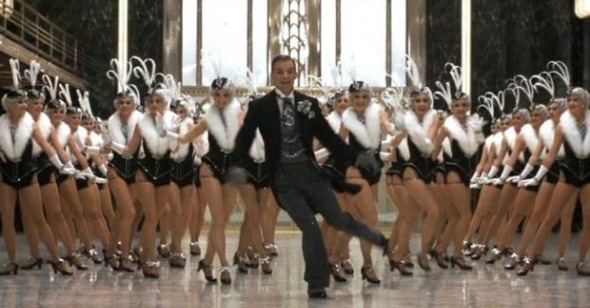 The tenets of any given genre change so drastically from era to era that the very process of categorization has become increasingly problematized. It seems as though every few years, it’s once again time to both bemoan a lost form and giddily herald its imminent comeback. If Oscars are any indication of Hollywood trendsetting—though many would foolishly deny this annual pageant’s importance, as exemplified by certain critics’ alarmism surrounding the screener ban—then it’s now apparently time for the musical to cement its reemergence into the mainstream. Rob Marshall’s frenetic, splenetic Chicago may not have been without its charms, but Miramax’s subsequent handling of its genre’s newfound cache, as well as its contractually whipped golden boy director, has revealed the sheer marketing cynicism beneath the supposedly joyous romp. Harvey Weinstein quickly snapped up the rights to Guys and Dolls and Damn Yankees soon after Chicago’s best picture triumph. If these choices for recycling are any indication, there won’t soon be any Hollywood daring to compliment this most daring of genres: the former is a chance to capitalize on Chicago’s windy city gangsters n’ molls framework, the latter an obvious way to get both women and their reluctant husbands into the theater. If there’s gotta be singing and dancing, toss in some Tommy guns or baseballs.

The official date of the Hollywood musical’s demise is agreed upon as somewhere between 1966 and 1970, that dark period following The Sound of Music when ridiculously overblown technicolor tripe like Star! and Doctor Dolittle were losing precious studio money, while increasingly socially aware audiences were supposedly clamoring for Easy Rider and Midnight Cowboy. Now, with a similar political backdrop and heightened distrust of government, audiences seem to be moving in the opposite direction; they want Shirley Temple again, not Five Easy Pieces. With every best picture nominee from last year comfortably set in the past (or partially, in the case of The Hours) and the winner repackaging and making palatable a long-considered defunct form, genre acceptance would seem to be as malleable as ever. It becomes increasingly difficult to define not only what people want to see, but which ingredients they’ll allow to be shown to them.

Rob Marshall and Bill Condon’s Chicago was praised by many as staying remarkably true to Bob Fosse’s original stage version, and therefore, his vision of the piece; this is probably how Fosse would have made it, many shortsightedly proclaim. But the Fosse persona provides perhaps the most worthwhile thru-line to the ever-shifting concepts of genre. Onscreen and on stage, the Fosse of the 1950s is certainly not the Fosse of the 1970s, which had certainly evolved even further by the time of his final shuffling off. If the choreographer of The Pajama Game (1957) can evolve into the director of Sweet Charity (1969), move on to the grim show-biz-as-cannibalism masterpieces Cabaret (1972) and All That Jazz (1979), and finally end with the subterranean non-musical Star 80 (1983), then it’s unlikely he would have moved on to the pomp-and-glitter regression of Chicago, no matter how cynical the material. So, it’s not Fosse’s Chicago, but Weinstein’s, a hellzapoppin entertainment of surface delights and curious novelties (see Richard Gere’s questionable tap-dancing skills).

With Cabaret, a sinister allegory of the Nazis’ rise to power told from within the cavernous walls of a decrepit Berlin nightclub, considered widely the only artistically and commercially successful traditional musical of the “post-musical” period, it’s no longer simple to define what constitutes a musical at all. The films discussed in this month’s symposium mean to survey and question genre parameters, from audience expectations to particular national cinema movements. Often the question is asked, “But is it really a musical?” Is it parody, pastiche, or homage? Can there ever be another Fred Astaire or Gene Kelly? Most interestingly, is it possible any longer to make a musical without the text making reference to itself as such? If American productions Pennies from Heaven, Moulin Rouge, and Everyone Says I Love You, or Asian genre inquiries such as Tsai Ming-liang’s The Hole or Pen-ek Ratanaruang’s Monrak Transistor are any indication, it’s hard to recognize the form as anything other than that old song-and-dance.