Best of the Decade #17: No Country for Old Men 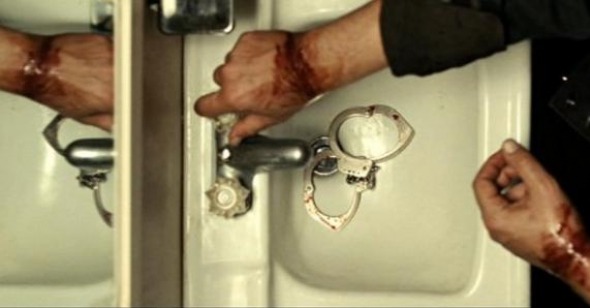 Found in Translation
Leah Churner on No Country for Old Men

Joel and Ethan Coen joked that putting Cormac McCarthy’s novel No Country for Old Men in script form was just a matter of retyping. One brother held the book ajar, the other entered its contents into the computer. Indeed, McCarthy’s 2005 bestseller, unanimously described as “sparse,” “skeletal,” and “spare,” unfolds through dialogue and action rather than the “subjective interiority” of its characters. The lone inner voice, first-person narration from the sheriff bookends the introduction and conclusion and is italicized, as if to announce VOICE OVER. If it reads like a screenplay half-shrouded in flowery prose, that’s basically what it is—among Cormac McCarthy’s personal papers at Texas State University in San Marcos, Texas, is his original iteration of No Country for Old Men, a 1987 screenplay, which he shelved and later refashioned. The Coens, for their well-typed adaptation of a novelization of a screenplay, took home the Academy Award for Best Adapted Screenplay, along with Best Directing and Best Picture.

The Coens’ 2007 Oscar magnet will be the standard bearer for all future Cormac McCarthy adaptations. The Road and Blood Meridian will suffer by comparison. And if McCarthy’s screenplay had been green-lighted around 1987, with a different director and cast, chances are it would have come out soggy like Billy Bob Thornton’s All the Pretty Horses (2000). This isn’t to imply that the Coens are untouchably hot shit—they’re flawed and so is McCarthy’s novel—it just so happens that the material fits them like a glove. With McCarthy they formed a star-crossed match in complementary colors.

Thematically, the source novel is a Coen Brothers template. The plot—about an amateur/accidental criminal doggedly pursued by professionals of the underworld—shares the same formula with their first film, Blood Simple, as well as Raising Arizona, Fargo, and The Big Lebowski. In McCarthy’s book, welder and Vietnam veteran Llewelyn Moss (played in the film by Josh Brolin) stumbles across a suitcase in the desert containing two million dollars at the gruesome scene of a botched border drug deal. One of the slain begs him for water. He ignores the plea and rushes home with the money, but his conscience keeps him awake. Returning to the scene with a water jug, he’s spotted and chased by a group of scouters from a drug cartel. He escapes, but it’s no use—by dawn the drug cartel and police have located and identified his truck. In addition to the local lawman, Sheriff Bell (Tommy Lee Jones), at least three bounty-hunting parties start looking for Moss: drug-runners from the Mexican side, the cowboy mafia in Texas, represented by a smooth talker named Carson Wells (Woody Harrelson), and worst of all, a free-agent sociopathic killer named Anton Chigurh (Javier Bardem). Moss hits the road and sends his distraught wife, Carla Jean (Kelly McDonald), to her mother’s in El Paso. Having two tours in Vietnam under his belt, Moss is a clever soldier, and Bell is highly respected, hardworking sheriff, but neither of these men are a match for Anton Chigurh, who may or may not be a superhuman entity.

The denouement of No Country for Old Men is not gratifying. Anton Chigurh gets away. Some of the novel’s characters call him a phantom, but we never find out what he really is, just as we remain unsure of the contents of the wrapped parcels in Barton Fink and the goy’s Hebrew-inscribed teeth in this year’s A Serious Man. The core mystery of No Country for Old Men (both book and movie) is existential. The action may take place in a standing pool of blood, but the meat and gristle is the ugly side of surviving into old age: reckoning with cosmic disappointment from midlife to retirement. At the end of the story, the Sheriff tells a friend, “I always thought when I got older that God would sort of come into my life in some way. He didn’t.” (This is in essence what A Serious Man’s Larry Gopnik would later say to the rabbis.)

The novel contains a riddle: Is the world getting worse over time, or is it just that dotage warps a man’s perspective? Either way, it’s a given for McCarthy that humanity isn’t making progress. Again, the Coens’ filmography puts them in league with the author on this point. They are renowned for their cynicism and have created several poisonous characters (Miller’s Crossing’s Bernie Bernbaum and Fargo’s Gaear Grimsrud) to mock tropes like “coming of age” and “conquering adversity.” This Old Testament attitude is also abundant in the novel. If there is a higher power, it’s deranged, and humans aren’t entitled to clemency. Like the titular forest in Miller’s Crossing and the biker bounty hunter in Raising Arizona, Anton Chigurgh is a black prophesy (especially hard on the little things, like Carla Jean). The West Texas landscape in McCarthy’s book is ideal for Biblical metaphors: arid and empty, with shrubby and shadeless trees and vindictive weather, it seems simultaneously the end of the earth and the middle of nowhere. It also appeals to the Coens’ penchant for ethnographic regionalism. Sharing roughly the same temporal and geographic setting as Blood Simple, No Country for Old Men invited them to resume their nuanced study of Texas-ness.

In the creative encounter between the Coens and Cormac McCarthy’s book, a mutual mellowing occurred. Their respective flaws and strengths fit together like jigsaw pieces. The omission of quotation marks and commas is a hallmark of McCarthy’s style. He builds paragraphs out of fragments and run-ons that snake across the page in the manner of the King James Bible: “The rifle had a Canjar trigger set to nine ounces and he pulled the rifle and the boot toward him with great care and sighted again and jacked the crosshairs slightly up the back of the animal standing most broadly to him.” Conversely, the Coens have traditionally abused the privilege of the exclamation point: too much pop music, too much color correction, voice-over, slow motion, scenery chewing, dream sequences, smash cuts, and recurring caricatures by Jon Polito. While I liked A Serious Man, the redundant images of magnified ear-hairs drove me to distraction—here we go on another journey through a tympanic membrane with Jefferson Airplane.

McCarthy’s laconic touch seems to have exerted a gravitational force on Joel and Ethan Coen; the book inspired them to try out a new asceticism. Their restraint is most evident in the score (inconspicuous to the point of being subliminal) and the characterizations. Whereas they usually fill the screen with muppet-people, here they’ve sired only one grotesque, Carla Jean’s mother, played by the wonderful character actress Beth Grant. For her, the Coens added lines of dialogue, such as “Thank you. You don't often see a Mexican in a suit” (spoken directly at the suited man, who has offered to carry her bags). With her incessant bitching and can’t-take-her-anywhere epithets, she’s constantly mortifying her daughter, and this cantankerous dame is surely one of the few characters in American movies whose death by cancer provides a third-act sigh of relief. The Coens infuse the bleak novel with just enough comedy to make it entertaining without tipping over to farce. All the characters have at a funny line here and there, from the sweet, wide-eyed deputy (Garret Dillahunt) to the marauding sociopath with the cattle gun (Javier Bardem plays for laughs in at least two scenes, his toilet-flush encounter in the trailer park office and his bullying of the gas station attendant).

The film isn’t only funnier than the novel, it’s also more suspenseful. In both, Bell, Llewelyn, and Chigurh never meet one another face to face, but the reader is too entranced by McCarthy’s polysyndeton to know what’s going on spatially. Onscreen, however, the choreographed distance between the three men is crucial to the dramatic tension. The Coens pruned the text of the novel, discarding its droning rhythm in favor of a classic thriller pattern of progressively quicker cuts. They also tossed out excess narrative baggage, such as Sheriff Bell’s survivor-guilt back story and the skanky teen hitchhiker Llewellyn picks up on the road.

The mise-en-scène is gorgeous in detail where the novel is not. McCarthy doesn’t shy away from specificity; he scrupulously describes the guns his characters use, and identifies the brand of boots they wear and the make and model of their cars and trucks. Anton Chigurh steals a particular type of Dodge truck: “The Ramcharger’s windows were tinted so dark they were looked black.” On the page, the name Ramcharger is mildly evocative of sex and violence, but nowhere near as impressive as the visual impact of the actual chassis. Onscreen, the Dodge Ramcharger is the stealthiest of villain-mobiles, examined in long, medium, and close-up shots (a hood-mounted camera tightly frames the angry, raring Dodge hood ornament), as Javier Bardem steers it around a motel parking lot at twilight. Monstrous trucks become a motif: boxy, early-model Ford Broncos and Chevy Blazers in Seventies hues of yellows and powder blue, outfitted roof-mounted KC lights and off-road tires. Not since O.J. Simpson’s low-speed chase has the sinister appeal of the truck-based SUV been so well articulated.

Javier Bardem’s haircut (which inexplicably scandalized critics and audiences alike) wordlessly communicates information about his character, as hair should do. It’s obvious, at the very least, that he’s not one of the locals. With his bowl cut, polyester pants, and jean jacket, he could be a full-fledged foreigner or a resident of Southern California (he resembles a Roadmaster-era Gene Clark). He’s more urbane than the people around him, and his look is a manifestation of his deadpan demeanor and apparent indestructibility. Why shouldn’t Death dress like a Nixon-era Angelino? Mary Zophres should have gotten Best Costume Design for Bardem’s breathtaking maroon crocodile boots, which are her creation. (You can’t buy boots like that in stores—I’ve looked into it.)

The fine-detail work, both audio and visual, is where the Coens’ love of punctuation finds its best expression as art: the duration of glances, the putting on and taking off of hats, condensation on a bottle of milk, the whisper-glide of boot soles across plush carpet, the squeak of the suitcase in the air vent, the cool, bluish light of dusk and dawns. (Credit is due to the obsessive storyboarding, along with DP Roger Deakins and sound editor Skip Lievsay.) In the film’s best action scene, the shootout at Eagle Pass (which is the closest Anton Chigurh and Llewelyn Moss come to a face-to-face encounter), Moss desperately hails a truck. The driver is instantly shot in the face, and Moss crouches down on the dead man, attempting to drive. The scene is all the more violent because it’s dark and the gun is silenced; the only sound is the pop-crack of bullets coming through the windshield, as if a hail storm.

Some kind of ravenous appetite keeps me coming back to this movie—I've watched it at least five times, certainly more than any other release from this decade. Like Gone with the Wind and The Godfather, No Country for Old Men exemplifies how brilliant an adaptation can be, with the right novel, cast and crew, and alignment of planets. It’s the high watermark of the Coens’ career, though they couldn’t have crafted a story so solid without Cormac McCarthy’s scaffolding. As the cliché goes, the whole is greater than the sum of its parts.