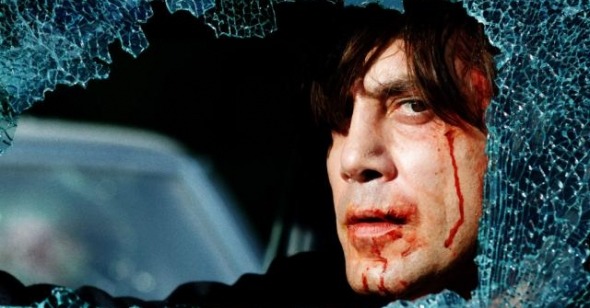 A man’s hair can speak volumes, and in No Country for Old Men, Javier Bardem’s is turned up to 11. It’s crucial to realize that such things as the ridiculous pageboy cut the Coen brothers have bestowed upon Bardem’s preternatural killer Anton Chigurh are not simply stray, eccentric details, but the shaping force of their films. They’re the quotation marks that let us know there’s no need to believe in any kind of reality therein, even as the all-too-real bursts of violence and cruelty expertly jolt our nerve endings. It’s hardly necessary at this late date to reiterate the Coens’ essential shallowness and artistic immaturity, though as with Tarantino, there are likely a few brave souls attempting to build a case for them as emotionally generous humanists. Best of luck to the faithful few—in the meantime, we might occupy ourselves in investigating what the Coens are actually doing. And this time out, what they’re doing is so impressive within its limits that the only criticism one can level is that the Coens are clearly aiming for something far beyond those limits, and have not the skill or character to reach it.

From its title on down, No Country for Old Men is the Coens’ bid to grow up, to add gravitas to their stylistic gravy, and it’s a testament to their rigor and concentration that the smarmier instances of their shtick—especially the idiotically incongruous appearance of a mariachi band to serenade the wounded Llewelyn Moss (Josh Brolin) in a Mexican dawn—stick out like so many sore thumbs. Drawing faithfully, this non-reader assumes, from the source novel, the Coens occupy themselves with the necessary, functional questions that so many thrillers (even the good ones) gloss over: How and where do you hide a satchel of money in a hotel room? How do you try to cover your trail in flight? Where do you position yourself to await an expected ambush? The meticulous attention to such quotidian details in the cross-country duel between Moss and Chigurh creates its own kind of suspense, or rather deepens and enriches the suspense as we await the inevitable moments of confrontation. As in any thriller, we know what’s coming, and as always, it’s the how that keeps us involved. By devoting their attention almost exclusively to that crucial question, the Coens have engineered a series of setpieces which, on technical merits, are pretty much peerless in light of any recent offerings.

If that sounds like deliberately measured praise, it is—but only because the Coens’ ambitions extend beyond No Country’s brilliantly crafted outer shape. The inevitability that lies at the heart of the genre’s workings is here expected to assume far weightier dimensions. We’re talking Themes, people, and here, tout court, is the allegorical beast itself: that no matter how tough, or resourceful, or cunning, or professional one is, death can claim one at any moment and in the most inadvertent of ways; and even those who think they embody that fate are subject to its inexorable and inscrutable laws. Fine and dandy, and in the original, McCarthy’s prose may indeed have seamlessly entwined this within the sparse language of physical description.

It’s ironic therefore that film, which has some natural advantages over the printed word in terms of physical description, proves far more resistant to yielding the metaphysical overtone evidently intended by McCarthy. Making a superior thriller is no mean feat, but to burden it with assertively existential meaning takes more than merely a dab hand. The Coens, whose technical aptitude has never been in doubt but whose artistic depth frequently has, have accordingly been led into something of a self-defeating enterprise. In a genre which depends upon expected moments of unexpectedness, they’ve foregrounded the mechanism but are patently unable to endow it with McCarthy’s mystical fatalism.

From the opening scene where Chigurh, in languorous real time, disposes of an unwary state trooper, the Coens announce that the film is going to be built on counter-rhythm, on faithfully delivering each bloody payoff, but not at the moment (or to the person) we might expect. Everything arrives a beat sooner or a beat later, or even passes unglimpsed. Again, fine and dandy, and the tactic works handily many times over. Thing is, a counter-rhythm pursued relentlessly, over and over again, naturally becomes a rhythm unto itself. Far before the end is reached, the film’s design has not only become completely evident, but positively lulling; one can almost time the “unexpected” shotgun executions to the second.

At which point the booster faithfully chimes in, “Yes, but don’t you see? It’s fate! It’s supposed to feel preordained! That’s the point!” Tautology again and forever, it seems. The old saw that a film about boredom need not be boring evidently has no traction once we toss some arty gunplay into the mix. Sinking into the rhythms of a film, to the extent that one can almost predict the moment of an upcoming action or cut, can be a pleasurable and expansive experience in the work of certain filmmakers (the Dardennes, Kitano). In the Coens’ case, it’s simply tightening the straps on their allegorical straitjacket. As Chigurh gets into a car near the end of the film and drives casually away, this viewer knew exactly what was going to happen next and why it was going to happen and what it all Means. Rather than the thematics emerging from within the accumulated physical detail, those details are merely the mechanisms to illustrate a predetermined point. Guided lockstep through every narrative turn by the dictates of its founding abstraction, No Country simply relies on the bought-and-paid-for authenticity of Tommy Lee Jones, Bardem, and a bizarrely credible Brolin to ground the film in a simulacrum of myth-tinged reality.

The Coens have thus marshaled enough art to make a superior thriller, but not enough to make art. And if the former need carry no hint of condescension, the latter must necessarily figure into our assessment of the whole. The Coens’ relentless precision is exciting and involving unto itself, but of course it is not unto itself: it’s inseparably yoked to the monotonously insistent allegory which it is in the service of. To label No Country a masterpiece is all too easy, as the film itself has clearly paved the path for the panegyrics to dutifully follow. Like the Indians sending up enormous dust clouds to divert Henry Fonda from the real ambush in Fort Apache, No Country flatters our acuity in picking up the obvious the better to rope us in. To praise this as the height of cinema is to do no more than read out verbatim the trail markers that have been so calculatingly left for us to find.