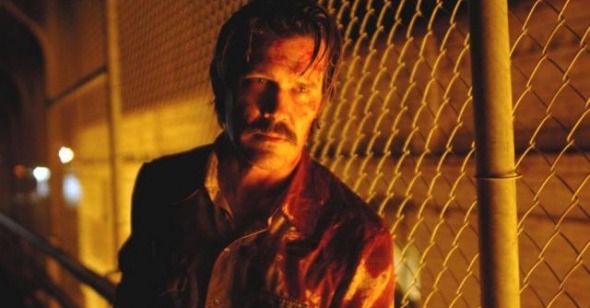 It‚Äôs good to have the Coen Brothers back. So good, in fact, that one can now consider the descending quality of their recent output (with the notable exception of 2001‚Äôs The Man Who Wasn‚Äôt There) an aberration, a temporary artistic malaise‚ÄĒwhich started with O Brother, Where Art Thou? and culminated in the low point of their career, The Ladykillers‚ÄĒbut one that has now come to a thankful halt. Sometimes you‚Äôve got to hit bottom before climbing back on top, as they say, and the transition from that miserable 2004 disaster to No Country for Old Men is such an about-face in the brothers‚Äô filmmaking that the most obvious of phrases can be unashamedly employed to describe their latest venture: an astonishing return to form.

The clearest reason for the rebound is the new film‚Äôs source material and, through it, the reestablishment of gravitas in the Coen universe. A minor but assured novel by one of our greatest living novelists, Cormac McCarthy‚Äôs No Country for Old Men is perfect for a Coen screen adaptation: it‚Äôs the sort of macabre/quotidian genre-bender rife with crime, violence, and a kind of everyman pondering that caters to the Coens‚Äô greatest strengths as absurdist chroniclers of the American ethos. Aside from the immortal The Big Lebowski, I‚Äôve never been wholly convinced of their take on comedy, and if their recent duds (as well as the badly aged Raising Arizona and The Hudsucker Proxy) have proved anything it‚Äôs that faux na√Įvet√© can only go so far before it eats its own self-satisfied tail. Though flecked with the dry humor of McCarthy‚Äôs stoic Texan dialogue (‚ÄúIt‚Äôs a mess, ain‚Äôt it, sheriff?‚ÄĚ ‚ÄúIf it ain‚Äôt it‚Äôll do ‚Äėtil the mess gets here‚ÄĚ) and distinguished by an eye for the outrageousness of thriller contrivances (a mariachi band waking up a bloodied gringo just in over the border), No Country for Old Men is as serious and sad as the images of desert landscapes with which it begins. The film is also a comeback for DP Roger Deakins, who, with a realistic eye, has captured everything overawing and foreboding in the settings of a film that's as brutal and relentless as the most anti-comic violence the Coens have depicted in their entire career. There‚Äôs a commitment to the truth of McCarthy‚Äôs vision and the tough succinctness of his prose in No Country that makes the film their most accomplished work and maybe even a masterpiece.

No Country for Old Men is a resigned statement on the human condition that sees the lonesome Texan plains and the chaos that takes place on its stage through the viewpoint of Sheriff Ed Tom Bell (Tommy Lee Jones, just a modicum too obvious in the Texas lawman role‚ÄĒhe‚Äôs played this type of role many times). The sheriff stays mostly on the sidelines during the unfolding story, functioning as a commentator, but by the end becomes a character in his own right. At the outset, though, he‚Äôs bewildered and overwhelmed by a series of crimes in his jurisdiction that center around the activities of one Anton Chigurh (Javier Bardem), a cold-blooded mercenary hired to gather the money from a drug deal gone wrong out on the plains. The Coens‚Äô understanding of this mysterious figure is at first difficult to pin down. Like the motorcycle-riding angel of death in Raising Arizona, he‚Äôs possibly a supernatural or biblical agent of fate, the sort of man who wagers a gas station owner‚Äôs life with the flip of a coin, but who is also a bit ridiculous, outfitted with a haircut that makes him look like a foppish Joey Ramone. This coiffure is absent in McCarthy‚Äôs novel, so one initially wonders if the Coens are once again (as they have many times in the past) condescending to their characters. But Bardem‚Äôs focused, menacing performance eventually clues us in. Even if we‚Äôre amused at his inscrutable nature, Chigurh is a man to be taken extremely seriously, and his strange ‚Äúprinciples that transcend money and drugs‚ÄĚ‚ÄĒunconventional codes toward honor and death and professional obligations‚ÄĒare the ones that call the irredeemable world of the film into question.

Chigurh is first shown killing a police officer (why and how he was arrested is never really explained) and then setting out with a pneumatic-air cattle gun as a weapon to retrieve the millions of dollars left behind at the massacre. But Llewelyn Moss (Josh Brolin) accidentally stumbles upon the scene first. His reaction when he discovers the briefcase containing the money sums up the matter-of-fact acceptance of life‚Äôs trouble from the jaded men who populate No Country: ‚ÄúYeah.‚ÄĚ Moss makes off with the money, but not without alerting furious Mexican drug dealers and the ominous Chigurh as to his role in the fracas. Going on the run forces him to abandon his young wife, Carla Jean (Kelly Macdonald), to safer surroundings, and so, with the security the money might have given him now gone, the three-way contest becomes an end in itself. McCarthy‚Äôs skeletal prose in No Country for Old Men (and in its apocalyptic companion piece, The Road) obsessively details survivalist know-how, and the Coens painstakingly recreate it. Large sections of No Country are wordless, pregnant with the expectance of carnage and death as Moss repairs suffered wounds and stocks up to fight Chigurh across the state to the border. A classical patience pervades the Coens‚Äô careful, precise delineations of action, in the rhythms that tap out the terror of each moment portending violence, and the action set pieces are the brothers‚Äô best work of pure cinematic storytelling since Miller‚Äôs Crossing, their other great existential treatise on the ethics of gunplay and illegal activity. More than that, No Country could serve as a textbook in how to handle action off-screen‚ÄĒthe film‚Äôs most effective intimations of evil occur from across the bridge of what the brothers allow the viewer to see.

While Moss plays the desperate, single-minded risk taker, the kind of man who pays dearly for his avarice in Coenland, the film shapes up as a meditation on unfathomable destruction and man‚Äôs role in it, with Chigurh setting the terms. American cinema has a terrific history of murderous sociopaths, best exemplified by Robert Mitchum‚Äôs various onscreen incarnations, but of late the field has thinned out. Having become a self-parody, the cinematic sociopath is now almost never played straight, or if he is he‚Äôs as disposable as the movie in which he appears. The Coens avoid complete earnestness in their realization of Chigurh, but No Country for Old Men never allows his actions to become alien by way of the overly bizarre. When this man with ‚Äúno sense of humor‚ÄĚ (as Woody Harrelson‚Äôs mercenary nemesis Carson Wells deems the jean-jacketed European) rhetorically asks what the value is of another‚Äôs way of life should that way of life eventually led to his pitiful demise, or when he explains his method of meting out death by comparing his presence in another‚Äôs life to the chance result of a coin, it‚Äôs far from the pseudo-Nietzschean tripe that‚Äôs been passing for macho philosophizing post-Hannibal Lecter. His words express a morality almost impossible to understand and yet no more irrational than the circumstances that have led to the creation of such a monster. At two separate moments Chigurh and Sheriff Bell‚Äôs dark, almost underwater-like reflections on a television screen mirror each other, and Bell is indeed Chigurh‚Äôs opposite reflection, a man wanting to do good but burdened by a desire for justice he understands as now antiquated in an increasingly lawless world.

Or perhaps not. Two scenes at film‚Äôs end place the onus on Bell as he tries to sort through the ramifications of everything that‚Äôs taken place and everything he‚Äôs failed to save. Increasing decadence and corruption aren‚Äôt to blame, his wheelchair-bound uncle (Barry Corbin) tells him, things have always been this nasty and beyond comprehension, and the final shot rests on Jones‚Äôs weathered countenance as he relates a dream of reconciliation with his father, also a lawman‚ÄĒBell has worked hard and been dragged down and, prideful in rationalizing his retirement, wants peace. ‚ÄúAge‚Äôll flatten a man,‚ÄĚ he states at one point, and the film‚Äôs weary conclusion might be that this life flattens even the sturdiest of its creatures. Chigurh, a ‚Äúghost,‚ÄĚ as Bell calls him, is also last seen rendered human, victim to the same entropy and random hazards to which all souls are prey. If all this sounds too heavy from a filmmaking duo whose tributes to classical Hollywood comedy have come to define them over the past decade, consider that the Coens‚Äô surreal Americana once asked darkly, humorously, and effortlessly the big, persistently nagging questions about individual responsibility in an absurd, evil universe. We‚Äôve come to expect less of them since Miller‚Äôs Crossing, Barton Fink, and even Fargo, which is why the stern, somber reckoning of No Country for Old Men feels so forceful. Irony in the background, what‚Äôs so impressive about the Coens with this film is how much of their sensibility still remains at the fore, and how many hues of their cinematic palette have become enriched and invigorated because of it.