Women on the Verge of a Nervous Breakdown 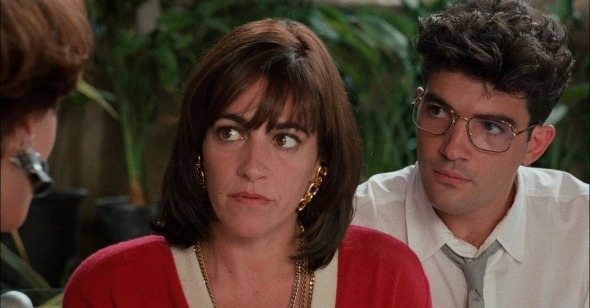 Crack and Hum
by James Crawford

Viva Pedro: Women on the Verge of a Nervous Breakdown

Now that Pedro Almodovar has spent close to a decade working in his idiom of dark, fraught melodramas, it‚Äôs easy to forget the vitality of his early films. Almodovar today is weighty, considered, bankable in his sensitivity towards both fragile characters and those living on society‚Äôs periphery (often they are one and the same), though if there is a small problem with his last few films, it‚Äôs that they are a touch oppressive. If it‚Äôs possible for transgressive cinema to be schematic Almodovar manages it, because it‚Äôs almost expected that he‚Äôll push the boundaries of sexual mores, and in today‚Äôs libertinism, his films have gone from being radically provocative to only quietly so‚Äîwhich I suppose is the problem when the penchants of firebrand filmmakers become assimilated by outlets of Dominant Culture. It‚Äôs only a minor quibble, but when viewing an un-flawed yet airless film like Bad Education, one can‚Äôt help but recall how Almodovar‚Äôs films once crackled and hummed. Women on the Verge of a Nervous Breakdown, the film made immediately after the stunning two-fisted provocation of Matador and Law of Desire, is a frothy gem, praiseworthy for the fact that it steps back from its potential and easily effected seriousness. It treats melodrama as a point departure, lightly alluding to its conventions as a road deliberately not taken.

Almodovar is one of those heavyweight directors, like Woody Allen or Hitchcock, whom it is possible to enjoy without the necessity of fully understanding the source of one‚Äôs enjoyment. It‚Äôs possible, for example, to be borne along the lugubrious surface currents of All About My Mother, caught up in the angst of a woman trying to reconnect with the father of her dead son, or to admire his dogged‚Äîif sometimes strained‚Äîmusings on death, gender, and so-called sexual transgression. Yet his meta-textual preoccupations have always engendered controversy, and I‚Äôve been ambivalent about his incessant reliance on cultural referents: are the inclusion of All About Eve and A Streetcar Named Desire merely a way to lend All About My Mother some cheap gravitas by inducing a frisson of recognition for folks who have heard of the AFI Top 100 (but not watched any of its films), or are they truly imbricated in the plot?

The case could be persuasively argued either way for some of Almodovar‚Äôs later films, but for Women on the Verge, the substance of genre is just as important as the mechanics of the narrative itself. Pepa (Carmen Maura) is a voice-over artist who has been unceremoniously dumped by co-star Ivan (Fernando Guill√©n) for another anonymous woman, an event that sends her more than a little out of control. Doubly troubled by the revelation that Ivan is the father of her unborn child, Pepa succumbs to the outward trappings of the frantic female: lighting her bed on fire, blending a bottle full of barbiturates into a pitcher of gazpacho, and, stricken by its emotional residue, putting her plush apartment up for rent. And yet she always manages to stop short of full hysteria. While enamoured of the idea to torch her love-nest, she‚Äôs shocked when it comes to dealing with the actual fact of a burning bed; the spiked soup, instead of being downed in a drastic suicide attempt, is, on second thought, stored in the fridge. Instead of going crazy, the world becomes deranged around her: her friend Candela (Mar√≠a Barranco) seeks asylum from the cops after realizing that her boyfriend is a Shiite terrorist; Carlos (Antonio Banderas, bespectacled and boasting a coiff no doubt inspired by the members of Color Me Badd) and his rather mannish fianc√©e Marisa (Rossy de Palma) stop by to view the apartment and somehow never leave; and Ivan‚Äôs sometime asylum-bound wife Lucia (Julieta Serrano) shows up, gun in hand, to exact revenge on Pepa and/or her husband.

Breathlessly paced and overfull with chance encounters, outlandishly oblivious characters, and a solipsistic universe populated only by a handful of people (Pepa hails a cab three times and thrice is picked up by the same femmy driver; the lawyer she solicits for Candela‚Äôs defence just so happens to be having an affair with Ivan), Women on the Verge is above all a farce, but just as Pepa and Candela seem on the precipice of succumbing to their own neuroses, the entire drama itself seems to be on the razor‚Äôs edge of tipping over into melodrama. Small surprise then, that the ur-text hanging umbrella-like over the film is Johnny Guitar. Pepa and Ivan, dubbed the voices of Joan Crawford and William Holden, respectively, for the Spanish version of Ray‚Äôs film. Pepa meditatively returns to memories of performing the voiceover at critical junctures, often at the nadir of her heartache. Crawford‚Äôs character, clearly wounded and slightly broken by Holden‚Äôs departure (and subsequent return) despite a stubborn lacquer of defiant indifference thus serves as a way for Pepa to exorcise her longing for Ivan‚Äîa cautionary tale about being in thrall to any man. Johnny Guitar therefore informs Women on the Verge, not in any deterministic or strict correlative sense as did All About Eve for All About My Mother, but as a template of the tragic direction that the film could potentially take. The only reason the film doesn‚Äôt devolve into full-bore tragedy is Almodovar‚Äôs hand palpably intervening in the action, breaking up his own narrative through unmotivated random meetings, visitors at the front door, and interruptive phone calls.

While the difference between comedy and tragedy may have to do with timing, the difference between farce and melodrama is time. The former involves the coordination of events, the near-misses and lapses of information that sends protagonists to their deaths in Elizabethan tragedy; the latter is concerned with duration. Melodrama is about pushing a scene to its breaking point, and then pushing past it such that the characters achieve catharsis, transcendence, or both. Thus the mode of Mildred Pierce or Humoresque requires duration to afford Joan Crawford the time to reach those heightened breaking points. Because Almodovar‚Äôs film is about women only on the verge of nervous breakdowns (note the grammatical slippage in the film‚Äôs title, as though one communal, colossal breaking of the psyche is imminent for all the women involved) without the showing actual breakages themselves, there‚Äôs an implicit agreement between the director and his subject that he‚Äôll always step in before the proceedings to become too burdensome. Almodovar senses when his material has reached its breaking point, and finally releases the reins, climaxing in a flurry of gazpacho-drugged cops and a moped chase, leading to Pepa‚Äôs final, for a lack of a better word, ‚Äúredemption‚Äù‚Äîthough a better term is needed, because she renounces her man without really having to sacrifice her dignity. At one critical juncture, Pepa voices her predicament: ‚ÄúDon‚Äôt call me a pain! I‚Äôm feeling very vulnerable;‚Äù by giving her emotional state a verbal habitation and a name, she makes her grief intellectual and sensible, rather than performative and excessive, after the mode of traditional melodramatic heroines. In short, Almodovar‚Äôs manipulation of genre makes Women on the Verge one of most perceptive deconstructions of melodrama ever produced.

As a frothy creature of whimsy and caprice, Women on the Verge is unique in the director‚Äôs oeuvre, and yet it remains quintessentially an Almodovar film. There are latent obsessions with post-WWII ideas of feminine beauty‚Äîovertly played out in the 1950s advertisements of beatific housewives, and more subtly manifested in Lucia‚Äôs anachronistic beehive wig‚Äîand with the complicated parameters of feminine relationships‚Äîparticularly between friends and romantic rivals. The other potential interactions, namely mother to daughter and other domestically-inflected relationships are precluded because of the way Jos√© Luis Alcaine photographs domestic space. Using a wide angle lens, Alcaine shoots household objects in hyperbolic close-ups such that they fill the frame, while the background telescopes sharply away from the foreground. Elsewhere in the apartment, the camera focuses in tight on Pepa‚Äôs feet as she stalks back and forth across a set of wide, depressed steps; the screen‚Äôs vertical dimension is fragmented by a series of horizontal lines. Constructed in this fashion (and subsequently set on fire, etc.), the apartment, standing as a synecdoche for all domestic space (and indeed the only dwelling in which characters spend any significant amount of time), is simply uninhabitable, and therefore not liable to meaningful relationships. And as befits an Almodovar film, Women on the Verge is utterly devoid of traditionally masculine males of any consequence. Carlos is bespectacled and dominated by his more manly beau, the ubiquitous taxi driver is a repository of feminine stereotypes‚Äîall the way from hair-trigger weepiness to an obsession with hygiene products‚Äîand Ivan is a philanderer and a coward, too afraid of confronting Pepa even to collect his belongings: he is a spectre, scarcely glimpsed and most notable for his absence. Sketching out three archetypes of woefully insufficient males, Almodovar neatly undermines the idea that a kiss from any man is potent enough to induce hysteria.

Women on the Verge of a Nervous Breakdown is an apt selection to kick off the ‚ÄúViva Pedro‚Äù retrospective beginning today at Lincoln Plaza in New York and touring nationwide this Fall, because it recalls what a vital and lively director Pedro Almodovar once was. Moreover, it must be said, the film is a particularly safe way to inaugurate the uninitiated into the filmmaker‚Äôs oeuvre. Incorporating Almodovar‚Äôs charged and controversial predilections through a sanitized filter of buoyant, hyperkinetic farce, there are plenty enough delights to engage superficial interests‚Äîand enough textual introspection to make Women on the Verge a film of true heft.