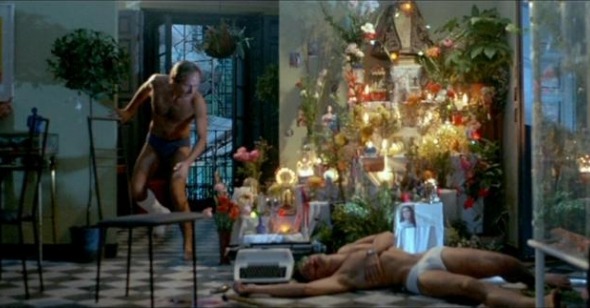 A public service par excellence, Sony Pictures Classics’ touring retrospective of eight Pedro Almodóvar films is one of the more generous gestures of the cinematic season, even if its ultimate purpose is merely to whet appetites for the terrific Volver. The series is perfect for someone like me who caught up with Almodóvar around the time of All About My Mother and has followed with mild interest since without finding in the recent works (until Volver) any immediate reason to dive headfirst into the back catalogue. There’s been a great deal of love for All About My Mother and Talk to Her in the pages of Reverse Shot, which I can certainly understand, if not share. If pinned to the wall, I’d honestly be hard-pressed to answer for my middling response to both of these films—they’re certainly lovely and intricate, and play with questions of artifice and intertextuality in ways that usually tickle my fancy (who needs the Six Moral Tales when there’s Perceval?), but both nagged me with a sense of actively desired and worked-for approbation. Courting audience pleasure is not a bad goal in itself, but when coupled with an icily pristine aesthetic intended as a gloss for ostensibly perverse matters, the overall effect for me was one of queasy imbalance. Or perhaps it’s precisely the opposite: I hate to criticize a film for being too perfect, but that just may be the rub.

Bad Education was a tawdry, scuzzier step towards the kind of things I want out of a filmmaker willing to traverse the terrain associated with Almodóvar—why go gossamer to make the art-house set feel good about bad when you’re a strong enough filmmaker to not have to pull punches to create pleasure? (I may honestly never hear “Moon River” again without thinking of that film.) Of course, thoroughly loving the neoclassical grandeur of Volver somewhat complicates my Almodóvar critique, but with a performance as vital and feral as Penélope Cruz’s, I welcome the impossibly ornate container. His much earlier, name-making Law of Desire doesn’t scale those same heights of delirious immersive beauty, but it doesn’t really need or want to, even if by the end of the film you might catch furtive glances in that direction. The trajectory from grungy boundary-pushing appropriator to classy boundary-pushing appropriator isn’t uncommon (I’d call out Egoyan, but he seems to have gone off the rails entirely), and is perhaps a function of filmmakers aging—not growing, mind you—with their audience. Law of Desire feels vibrantly young, and appropriately on the edge of total control, whereas Volver feels like a massively orchestrated work. Both films are largely the better for their respective handlings.

Law of Desire rotates around a typically Almodóvarian cast of misfits and outsiders: Pablo, a gay porn director (Eusebio Poncelo); Tina, his transsexual sister (Carmen Maura); Juan, an actor in Pablo’s film and also his lover (Miguel Molina); and Antonio (Antonio Banderas), a hunk that catches Pablo’s constantly roving eye. Roughly a love triangle between the three male (at least during the span of the narrative) leads, it cribs liberally from the Play Misty for Me trajectory wherein a casual one-nighter turns deadly, with Banderas standing in for the jilted Jessica Walter character. The differences between the two films lie in their markedly divergent treatment of the psychosexual thriller narrative. Clint Eastwood honestly tries genre on for size, fails, abandons it in favor of an arboreal tryst and a trip to the Monterey Jazz festival, realizes his movie needs to end and jumps back in, barely pulling it all together. Almodóvar’s movie is more coherent, much twistier, and pulls (like many of his works) from the collected image banks of a near-century’s worth of cinema to construct an easy, familiarity within which to slip his circulating homosexual desires, splinter subplots and sidebar characters—here comically exemplified by a young girl, the daughter of Tina’s ex-lover, who herself is in love with Pablo and on the verge of discovering religion.

Films about actors and directors—perhaps “performer” is a better catchall—are by now Almodóvar’s stock in trade (oddly finding concordance on the other side of the globe in Korea’s Hong Sang-soo), and it’s a nicely shorthanded entry point into films where narrative mechanics often overwhelm characters (another reason I like Volver: there’s no subsuming Penélope). What’s fascinating about Almodóvar is that a career so fully built around tactics of appropriation is regularly discussed in terms of authenticity, whereas another ace borrower who immerses himself in genre like Brian De Palma receives little slack from critics. If Law of Desire is a homosexual rereading of Play Misty for Me, Almodóvar’s first shot steals outright from Blow Out, with a nude Juan writhing under the gaze of a few palpitating older men, the whole thing revealed as part of Pablo’s newest film providing a ready counterpoint to the fake co-ed stalking that opens De Palma’s film. Where the general line of reasoning for “mature” Almodóvar goes that the filmmaker has finally found a way to sublimate his own innate, gaudy sense of composition, influences from his homeland, and obvious, obsessive love of cinema, Law of Desire can easily be argued as more rough-hewn, more indebted to forbears who were in turn indebted to Hitchcock, more openly ribald. In its day it must have seemed a breath of fresh air.

Twenty years on, the film’s certainly dated, but not irrevocably so. Its problems are the same as any young filmmaker trying to stretch (not unlike early Assayas)—incomplete tonal control highlighting a few moments of brilliance, which cast the rest of the film in stark relief. The dichotomy is, admittedly, part of what makes the work exciting as well. The bulk of Law of Desire features all the gaudy art direction, seedy melodrama, and intrusive scoring we might expect, but something’s lacking on the order of composition and camerawork which might have masked those points at which the narrative lags or ties itself up in its own complexity. Appropriately enough, this is all remedied in the finale—Antonio’s shot himself after one last session of lovemaking with Pablo (and his earlier murder of Juan, of course), and while Pablo cradles the bloody body, Almodóvar cuts to the massed policeman and interested onlookers (including Tina) arrayed on the street below. All look up towards the window as Almodóvar undertakes a hugely elegant tracking shot that reveals the crowd to be as immaculately and artificially arranged as the cast of some Broadway musical (opera might be more to the point). Then, in an unexpected, brilliant move—he cuts to show the front of the building, as the assembled cast (including Tina) rushes to climb the scaffolding, Keystone Cops-style. Freeze-frame on the madness, and Fin. Viva Pedro, indeed.